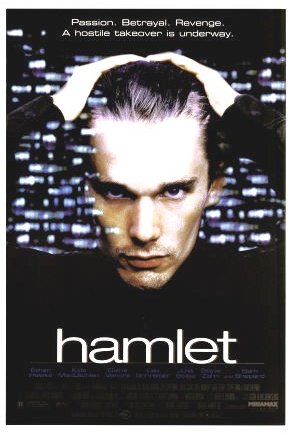 "Hamlet", also referred to as "Hamlet 2000", is an American by , released in 2000, set in contemporary , and the 7th film based on the Shakespeare's play of the same name. plays Hamlet as a film student, co-stars as Ophelia, Laertes by , Uncle Claudius is played by , and by .

In this version of "Hamlet," Claudius becomes King and CEO of "Denmark Corporation", having taken over the firm by killing his brother, Hamlet's father.

Similar to , the film keeps the Shakespearean dialogue but presents a modern setting, with technology such as s, Polaroid cameras, and surveillance bugs. For example, the of Hamlet's murdered father first appears on closed-circuit TV.

* Elsinore Castle, the seat of power of 's crown in the play, is re-imagined as Hotel Elsinore, the headquarters of Denmark Corporation.
* The Mousetrap Play takes the form of a video montage, made by Hamlet himself.
* The character of Marcellus, one of the soldiers, is re-imagined as Marcella, Horatio's girlfriend.
* The Captain in ' army is replaced by a in Hamlet's flight to England.
* Instead of carrying around actual flowers, Ophelia (in her madness), carries polaroid photographs of various flowers. In the film, Ophelia is an amateur photographer.
* Fortinbras's conquests are not military, but corporate takeovers with the aid of his "armies" of lawyers.
* Laertes doesn't organize a revolution. He merely confronts Claudius.
* As opposed to drowning in a brook, Ophelia is found to have drowned in a fountain in front of the Hotel Elsinore.
* The Ghost of King Hamlet appears in Horatio's apartment, sitting in his bedroom as Marcella sleeps, before Hamlet and Horatio enter it.
*The first intervention of Osric is re-imagined as a fax machine in Hamlet and Horatio's apartment, delivering Laertes's message right before the duel. However, Osric does appear during the duel between Hamlet and Laertes.
* Laertes doesn't kill Hamlet with a poisoned rapier. Instead he shoots Hamlet with a pistol, then is shot himself. Hamlet then uses the same pistol to shoot Claudius.