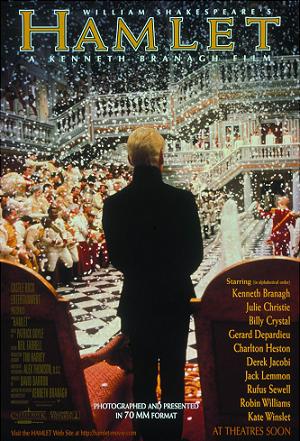 "Hamlet" is a 1996 film version of 's classic play of the same name, adapted and directed by , who also stars in the title role as . It is set in the 19th century, and uses for exterior scenes. It co-stars as , as Queen Gertrude, as Ophelia, as , and as Horatio.

The film is notable as the first unabridged version of the play. The complete film runs at just over four hours. The longest version of the play prior to the 1996 film was the 1980 version starring , which runs three-and-a-half hours. A shorter edit of the Branagh film, approximately two-and-a-half hours long, was shown in some markets. [ [http://www.imdb.com/title/tt0116477/alternateversions Alternate versions] ]

The film features a large number of celebrity cameos. Seemingly no role was too small to be played by a star; the servant Reynaldo, who appears only briefly in a single scene and is often left out of abridged versions of the play, is played by French star and other appearances by well-known actors include as the First Player, as the courtier , as the English Ambassador, as the ghost of Hamlet's father, as Marcellus, the palace guard, and as the gravedigger. The flashbacks and dream sequences even allow for celebrities appearing in non-speaking roles as characters who are only mentioned in the play: Sir John Gielgud and Dame Judi Dench play and (mentioned in the monologue performed by the First Player on his arrival at Elsinore), plays "Old Norway", uncle of Fortinbras (mentioned by Claudius and Voltemand), and plays Yorick.

, built in the early 18th century, became Elsinore Castle in the external scenes. The film's budget was $18 million. "Hamlet" was filmed in Panavision Super 70 by . It was the last feature film shot entirely in the format as of 2007.

Aspects of the film's staging are based on 's recent production of the play, in which Branagh had played the title role. [Crowl, Samuel "Flamboyant Realist: Kenneth Branagh" in Jackson, Russell "The Cambridge Companion to Shakespeare on Film" (Cambridge University Press, 2000)]

In a radical departure from previous Hamlet films, Branagh set the internal scenes in a vibrantly colourful setting, featuring a throne room dominated by mirrored doors; film scholar Samuel Crowl calls the setting "film noir" with all the lights on." [Crowl, p.227] Branagh chose costuming and furnishings, using Blenheim Palace, built in the early 18th century, as Elsinore Castle for the external scenes. Harry Keyishan has suggested that the film is structured as an epic, courting comparison with "Ben Hur", "The Ten Commandments" and "Doctor Zhivago". [Keyishian, p.78] As J. Lawrence Guntner points out, comparisons with the latter film are heightened by the presence of ("Zhivago's" Lara) as Gertrude. [Guntner, pp.122-123.]

Despite using a full text, Branagh's film is also very visual; it makes frequent use of to depict elements that are not performed in Shakespeare's text, such as Hamlet's sexual relationship with 's Ophelia and his childhood friendship with Yorick. [Keyishian, p.79] The film also uses very long single takes for numerous scenes. In addition, the film also includes a single word - "Attack!" - not present in any Shakespearean source or modern edition.

The courtier Osric is wounded in the final scene. In Shakespeare's original, he is not injured.

Some critics, notably , declared the film to be the finest motion picture version of "Hamlet" yet made, and online film critic has gone so far as to declare the Branagh "Hamlet" the finest film ever made, rating it as the fourth best film of the 90's and one of the top 100 of all time. [cite web
url=http://www.reelviews.net/movies/h/hamlet.html
title=James Berardinelli's Review] The "New York Review of Books" praised the attention given to Shakespeare's language, "giving the meter of the verse a musician's respect," [O'Brien, Geoffrey "New York Review of Books" 6 February 1997, cited by Samuel Crowl, "Framboyant Realist: Kenneth Branagh" in Jackson, Russell "The Cambridge Companion to Shakespeare on Film" (Cambridge University Press, 2000) p.228] ; Branagh himself says his aim is "telling the story with utmost clarity and simplicity." [Branagh, Kenneth "Introduction and Notes" to "Much Ado About Nothing: Screenplay" p.ix cited by Crowl, p.228] .

The film did have its detractors however, with of calling it "the film equivalent of a lushly illustrated coffee-table book" [ [http://www.washingtonpost.com/wp-srv/style/longterm/movies/review97/hamletrose.htm WashingtonPost.com: 'Hamlet': Kenneth Branagh's Inaction Flick ] ] and writing of Branagh's performance "...the choices he makes are usually overextended. When it's time to be funny, he skitters over the top. When he's sad or touched, he makes a mechanical, catching noise in his throat." [ [http://www.washingtonpost.com/wp-srv/style/longterm/movies/review97/hamlethowe.htm WashingtonPost.com: Branagh's 'Hamlet': Not to Be ] ]

"Hamlet," however, was not a success at the box office, playing on fewer than 100 screens in the U.S. and earning only $5 million in its limited American run.

A 2-Disc DVD was released in the United States on the 14th August 2007. It includes a full-length commentary by Branagh and Shakespeare scholar Russell Jackson. [ [http://www.kenbranagh.com/news.htm Kenneth Branagh's Hamlet ] ]