Marble Hill Nuclear Power Station is a nuclear power plant in Saluda Township, Jefferson County, near Hanover, Indiana, USA (N38° 36.01' W085° 26.74') . It was first proposed in 1973 by Public Service Indiana (PSI) and was finally closed due to overwhelming expenditures.

Construction began in 1977 and was halted in 1984 with Unit #1 approximately 80% complete and Unit#2 40% complete. A proposal in June 1984 to complete the project was made by three of the major construction contractors: the Bechtel Power Corporation, Sargent & Lundy and the Westinghouse Electric Corporation. This plan was rejected because it required Public Service Indiana to continue to find financing for the $7.1 billion project. 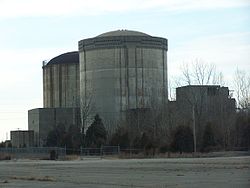 A 2007 view of the reactor complex. Notice that the turbine building behind the containment buildings has been demolished.

Marble Hill is currently owned by an undisclosed company based in Michigan and has been under demolition with a contract from MCM Management Corp. Currently, the buildings that are not fully demolished are the two containment buildings, the auxiliary building, the cooling stations, the 'ultimate heat sink' and the downhill freshwater pipeline with pump station. In 2008, the facility has been undergoing more demolition in which the Fuel Handling building (the smaller square building between the two containment buildings) is slowly being torn away and scrapped. All other areas appear intact.

In 1990 Power Equipment Supply Co. ("PESCO") was incorporated in Indiana and was established to sell equipment and parts from the Marble Hill Facility project. PESCO also purchased equipment for resale, brokered equipment, and sold equipment on consignment for others. Public Service Indiana discontinued PESCO operations in early 1996.

As of August 2010 most of the structure has been demolished. 1 of the containment buildings has been completely demolished and the other has no reactor core, and is under heavy demolition.