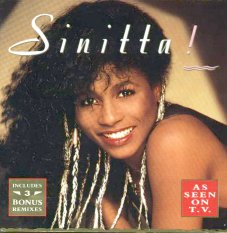 Sinitta (born Sinitta Renet Malone, October 19, 1966, , [ [http://www.imdb.com/name/nm0719478/ IMDb.com database] ] ) is an American actress and singer, famed for her hit records in the 80's including, "So Macho", "Toy Boy", "Cross My Broken Heart" and "Right Back Where We Started From", and her close relationship with . She is the daughter of singer and Anthony Blackett, and is also the niece of . She is married to financial director and international business banker, Andy Willner. [ [http://www.nmg.ws/default.asp?SelectMenu=AndyWillner Nmg.ws] ] The couple have two adopted children. [ [http://www.mirror.co.uk/celebs/latest/2007/04/07/sinitta-set-to-adopt-89520-18871039/] ]

She was born to Anthony Blackett and the Canadian and . Sinitta was the first of twins. Sinitta's younger twin sister Greta was fostered and moved to America by Miquel's aunt and Mary's goddaughter. Sinitta would not find out about her twin until she was a .

Sinitta began in show business by appearing in the musical "The Wiz" and the movie "" in 1981, followed by starring in the West End musicals "Cats", "Little shop of Horrors", "Masqurade" and "".

Sinitta was the ghost vocalist for the dance group on the songs "Don't Beat Around The Bush" and "Break Me Into Little Pieces".

At the end of 1982, Sinitta appeared on the TV program "The Tube" as a dancer with Imagination. She did not sing during this appearance.

Sinitta began recording in 1983, releasing her first single, "Break Me Into Little Pieces" with dance troupe, . In the same year she also appeared in the video of "Rock the Boat" sung by Forrest. She continued to release singles throughout 1984 and 1985, including participating in 1984's "", the UK heat of the . None of these singles were successes and with all failing to chart, Sinitta's foray into the music industry looked as if it was over before it had begun. Everything changed though, in 1986, following a chance meeting with a then unknown junior music publisher turned rep, .

According to his official autobiography, "I Don't Mean To Be Rude But..." had been a post room boy at in the late 1970s, and had left that job for a year and returned to EMI Publishing. Unsatisfied with his prospects, he quit EMI Publishing after one year and formed his own publishing company called E&S Music. By Cowell's own admission the venture was a mistake and after a rather unsuccessful trip to L.A he pulled the plug on the company. He then met up with Iain Burton who was looking to form a record label and together they formed [ [http://www.amazon.co.uk/Dont-Mean-Be-Rude-But/dp/0091898285] ] .

Sinitta was both Cowell's and Fanfare's first ever signing. Cowell had contacted record producer and song writer, George Hargreaves who in turn provided the song, "So Macho". Armed with a highly infectious pop record, Sinitta looked poised for success, however Iain Burton changed his mind and called Cowell to advise that he was pulling the plug on . Convinced that "So Macho" was destined to be a hit, Cowell persuaded Burton to give him £5,000 to release the record. Which he did [ [http://www.amazon.co.uk/Dont-Mean-Be-Rude-But/dp/0091898285] ] .

The single was released in June 1986 but stalled around the lower reaches of the UK Top 40 singles chart. Determined to make Sinitta a hit, released the single a second time and a third time, where it finally broke into the Top 10, selling in excess of 900,000 copies and hitting the Number 2 position. Iain Burton's initial £5,000 investment became a profit of £1,000,000 and paved the way for Fanfare's future.

In 1987 became closely associated with and would spend time with Waterman at his studios complex, being mentored by him and learning about the effective running of a successful music business [ [http://www.amazon.co.uk/Dont-Mean-Be-Rude-But/dp/0091898285] ] .

Around this time Cowell was desperate for to write and produce for Sinitta. "Feels Like The First Time" Sinitta's subsequent single following "So Macho" had charted low (number 45 UK Oct 1986) and only spent 5 weeks on the chart, where as, in contrast, "So Macho" had been on the UK chart for 28 weeks in 1986, where it had peaked at number 2. Initially Waterman declined to work with Sinitta, claiming that SAW were too busy [ [http://www.amazon.co.uk/Dont-Mean-Be-Rude-But/dp/0091898285] ] . In the end though, SAW did work with Sinitta and her first single with the Hit Factory was "Toy Boy".

In his book, claims to have come up with the song idea for "Toy Boy", coining the phrase 'toyboy' which described older women dating considerably younger guys [ [http://www.amazon.co.uk/Dont-Mean-Be-Rude-But/dp/0091898285] ] . However, this is contradicted by writer/producer in his book "The Hit Factory- The Stock Aitken Waterman Story" as he claims that his inspiration came from the fact that Sinitta herself at the time was dating a guy junior to her age. Whichever way the story goes, "Toy Boy" was a massive hit reaching number 4 in the UK in July 1987, staying on the charts for 14 weeks. Despite only reaching number 4 in the charts, the song was the 26th best-selling single of 1987 in the UK, selling more than some number ones from that year, including Michael Jackson & Siedah Garrett with I Just Can't Stop Loving You and Steve 'Silk' Hurley with Jack Your Body. Sinitta has since re-recorded "Toy Boy" on two separate occasions. The first in 1999 for her hits album, and the second in 2007 with producers, Carl M Cox and to mark the song's 21st anniversary in July 2008. [ [http://www.prolificmedia.co.uk] ]

Following the release of her debut album "Sinitta!" in 1987 Sinitta moved away from working directly with although she continued to record at under the direction of mixmasters Pete Hammond, and Ian Curnow. Her second album, "Wicked!" released in 1988 contained only one track- "I Don't Believe In Miracles"- the others being produced by the aforementioned Hammond, Harding & Curnow in addition to and German producer Ralf Rene Maue.

By the 1990s Sinitta chose to record in a different style, however this proved less popular with all her single releases between 1990 and 1993 failing to chart in the Top 20 of the UK chart:- "Hitchin' A Ride" (Number 24 - April 1990), "Love And Affection" (Number 62 - September 1990), "Shame Shame Shame" (Number 28 - July 1992) and "The Supremes EP" (Number 49 - April 1993). "The Supremes EP" was the last certified single released by Sinitta in the UK. Sinitta's only studio album release of this period, "Naughty Naughty" (1995), was an album of pop covers and received a limited release in Asia. She also appeared on the cast recording album for "What A Feeling" which was a live recording taken from the Apollo Playhouse Theatre, in May 1997.

Sinitta had replaced to tour with (also a former artist) and (former ) in the rock and pop musical's concert, "What A Feeling" [ [http://www.thebubbleburst.co.uk/bb.php?entry=Sinitta Thebubbleburst.co.uk] ] in 1997.

Also in 1997 Sinitta's vocals were used for the single, "You Can Do Magic" by the fictitious group The Mojams. The single produced by her former hitmakers, & was created for the TV investigation programme, "The Cook Report" with journalist, in an endeavour to expose underhanded business practices in the music industry, known as 'hyping' where record labels buy their own music into the charts. Debbie Currie, daughter of the controversial former , was used as the face for the singer and single. Sinitta was not credited on the single.

With her music career in decline, Sinitta returned to the stage. However, in 2004 she re-invented herself as a TV personality, having briefly appeared in the 2003 documentury about , "Being Simon Cowell". She then appeared as a stylist and mentor support on the debut series of "" and has been associated with winning show ever since.

In 2006, almost 11 years following her last album release and despite not having had a Top 20 UK single since 1989, Sinitta was approached by British song writer and music producer, Carl M Cox with a view to re-launching and re-establishing her pop music career. She accepted the request and began working with PMG (Prolific Media Group) Productions in 2007. She's recorded several tracks with PMG including "Toy Boy 2008". [ [http://www.prolificmedia.co.uk] ]

As a result of the renewed interest in her music, in early 2008 Sinitta began working with other producers and writers, including her aunt and Nate & Sangoon on new material for a future studio album, her first since 1995. Former producer/mixer Pete Hammond has also been involved remixing one of her new tracks. Sinitta's first UK hits compilation featuring her official singles from 1986 onwards is also planned. A hits album featuring re-recorded versions of her popular recordings was released in 1999 and again under the name "Toy Boy" in 2007, however this particular release was never endorsed by Sinitta.

In June 2008, the inclusion of a circa 97/98 remix of Sinitta's swan song hit, "So Macho" on their compilation album "NRG Anthems" (Cat No. ALMY062) caused minor controversy [ [http://www.almightyrecords.com/forum/viewtopic.php?t=4208 Almighty: View topic - Almighty Presents 'Energy Anthems' ] ] given that the majority of fans are gay and that the now Rev. leader of the and co-writer and producer of "So Macho" and several of Sinitta's earlier music recordings, such as "Cruising", "I Won't Be Lonely This Christmas" and "Feels Like The First Time" has openly expressed his anti gay views. Certain gay fans objected to the support of "So Macho" as the royalties generated had by his own admission made Hargreaves a millionaire and that he was now using his money to tout anti-gay rhetoric and political policies. [ [http://www.dailymail.co.uk/news/article-414557/Gay-pop-anthem-writer-defends-firemen-snubbed-gay-rally.html] ]

In 2006 Sinitta competed on 's "" and returned for the third series of "The X Factor", as part of 's mentoring team.

In spring 2007, Sinitta teamed, as a judge, with theatre veteran , producer and media pundit, and choreographer on 's musical talent search series, "". Co-produced by 's Syco TV - the same people behind "The X Factor" and "...Got Talent" - the show sought to cast and for a new West End production of "Grease".

Sinitta has also had a cameo appearance on popular day time soap, " Neighbours", appeared as a panellist on "" and was even parodied on the comedy show, "".

Sinitta continues to work with , as a mentor support on "The X Factor", In the 2008/series 5 show she's working with the 'Boys [14-24] ' category. Previously on "The X Factor" Sinitta has worked on:

On 10 April 2008, it was announced that Sinitta had joined a long list of panellists on daytime television show, "".

Sinitta is married to the businessman Andy Willner. She is a former girlfriend and fiance of . [ [http://www.newsoftheworld.co.uk/1612_sinitta.shtml] ] She also had a two-year relationship with Hollywood actor during the 1980s. [ [http://www.marieclaire.co.uk/celebrity/best/7073/1/1/weird-celebrity-couples.html] ]

In November 2005, Sinitta announced that a woman named Kerry West was to be a mother for her baby with her husband. She made the announcement on the British programme "This Morning." At eight weeks into the surrogacy, however, West suffered a . She had been carrying twins. Sinitta and Willner have now decided to adopt two infants, and in 2008 they adopted two children. [: "Sinitta to adopt" [http://www.mirror.co.uk/showbiz/latest/2007/04/07/sinitta-set-to-adopt-89520-18871039/] ] "

The Best Of Sinitta