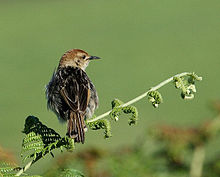 The Levaillant's Cisticola is a small, 12-15 cm long, dull-coloured bird with a longish tail and a reddish cap. The upperparts of the breeding adult are grey, heavily streaked with black, and with a rufous panel in the folded wing The supercilium, face and underparts are buffy white and the tail is russet brow. The short straight bill is blackish-brown with a pinkish base, and the feet and legs are pinkish-brown. The eye is light brown. Non-breeding adults are browner-backed, and juvenile birds have yellower underparts. The calls include a musical chrip-trrrup-trreee, a wailing tee tee tee and harsh alarm notes.

The cisticola is a resident breeder in eastern Africa from Kenya to eastern South Africa. It is common in reedbeds, sedges, rank grass, and similar wet habitats usually near rivers or dams.

Levaillant's Cisticola is usually seen in pairs, singly, or in small family parties. Flitting through the grass as it forages for small insects. It is vocal and conspicuous, perching on the top of tall grass stems and reeds and making its alarm call.

The cisticola builds a ball-shaped nest with a side entrance from dry grass, cobwebs and felted plant down. It is usually placed in a tuft of grass or weeds, which are standing in, or hanging over water. Nesting occurs from August to October.

This common species has a large range, with an estimated extent of 1,400,000 km². The population size is believed to be large, and the species is not believed to approach the thresholds for the population decline criterion of the IUCN Red List (i.e. declining more than 30% in ten years or three generations). For these reasons, the species is evaluated as Least Concern.