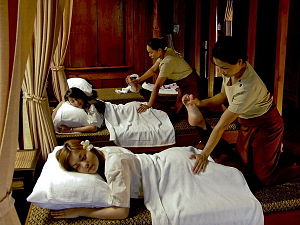 Thai massage is a type of massage in Thai style that involves stretching and deep massage. This form of bodywork is usually performed on the floor, and the client wears comfortable clothes that allow for movement. No oils are used in Thai massage. It is known in Thailand as "nuat phaen boran" (Thai: นวดแผนโบราณ, IPA: [nûət pʰɛ̌ːn boːraːn]), literally, the ancient-manner massage.

The massage recipient changes into loose, comfortable clothes and lies on a mat or firm mattress on the floor. It can be done solo or in a group of a dozen or so patients in the same large room. The receiver is put into many yoga-like positions during the course of the massage.

The massage practitioner leans on the recipient's body using hands and usually straight forearms locked at the elbow to apply firm rhythmic pressure. The massage generally follows the Sen lines on the body—somewhat analogous to meridians or Channel (Chinese medicine) and Indian nadis. Legs and feet of the giver can be used to fixate the body or limbs of the recipient. In other positions, hands fixate the body, while the feet do the massaging action. A full Thai massage session typically lasts two hours or more, and includes rhythmic pressing and stretching of the entire body; this may include pulling fingers, toes, ears, cracking the knuckles, walking on the recipient's back, and arching the recipient's into bhujangasana or (cobra position). There is a standard procedure and rhythm to this massage.

In Thailand, Thai massage is one of the branches of Thai traditional medicine (TTM), now recognized and regulated by the government, and is widely considered to be a medical discipline used for the treatment of a wide variety of ailments. On the other hand, Thai massage is also practiced and taught by a number of non-medical massage technicians in the spa and tourism industries. In North America and Europe, an increasing number of practitioners and teachers of Thai massage have emerged since the 1990s. In Europe and the United States, Thai massage is a growing modality among clients of massage clinics and massage therapists seeking continuing education. 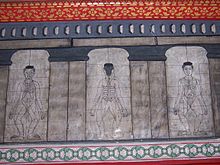 The founder of Thai massage and medicine is said to have been Shivago Komarpaj (Jīvaka Komarabhācca), who is said in the Pāli Buddhist Canon to have been the Buddha's physician over 2,500 years ago. In fact, the history of Thai massage is more complex than this legend of a single founder would suggest. Thai massage, like TTM more generally, is a combination of influences from Indian, Chinese, Southeast Asian cultural spheres and traditions of medicine.[1] The art as it is practiced today is likely to be the product of a 19th century synthesis of various healing traditions from all over the kingdom. Even today, there is considerable variation from region to region across Thailand, and no single routine or theoretical framework that is universally accepted among healers.

Generally speaking, practitioners of modern Thai massage operate on the theory that the body is permeated with "lom," or "air," which is inhaled into the lungs and which subsequently travels throughout the body along 72,000 pathways called "sen," or "vessels." Typically, massage therapists manipulate a handful of major sen lines by pressing certain points along the lines. In most models, the sen originate at the navel and spread throughout the body to terminate at the orifices. A significant part of the practice of Thai massage also includes yoga-like stretches which are intended to stimulate the sen and move lom through the body via a pumping action which is connected with the patient's breathing.

The theory of sen and lom is often translated into English as "meridians" and "energy." While there are some superficial similarities to Chinese meridian theory, the Thai system is markedly different as the sen are unconnected from the internal organs.