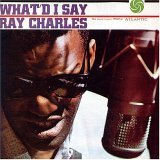 According to Charles, while performing at a nightclub, he had performed the last song of his set, "", when he was informed that there was another twelve minutes left in the show. Charles decided to fill the time by performing an impromptu version of the song that would eventually be recorded as "What'd I Say". Charles told his backing band and female background singers, the , to "just follow me". The song began on a Latin influenced drum beat and a riff before Charles improvised his own lyrics to it.

As the band became more comfortable with the piece, Charles and the Raelettes started an impromptu vocalization. Charles later said that the call and response section was "all about the sounds of making love".

Although the song is usually listed as "What'd I Say", Charles always insisted that the name of the song is "What I Say" as heard on the track.

Executives at Charles' , , expressed concerns that the song was "too risqué" and "too long". Radio station in Atlanta had recorded the tune as part of the live album "Ray Charles in Person" and placed their hot exclusive in heavy rotation. It became a hit.

Atlantic was convinced. To remedy the problem of length, in-house studio engineer split the song into two parts. With Atlantic's backing, the new studio recording of "What'd I Say" was released as a single in the spring of 1959 and soon rose to the top of the charts. The song would peak at #1 on Billboard's R&B singles chart and #6 on the popular charts.

also performed the song in character as (but in the style of Ray Charles) in a season 1 episode of .

"What'd I Say" was ranked tenth on "Rolling Stone"'s List of the 500 Greatest Songs of All Time. In 2000, it ranked #43 on "'s 100 Greatest Song in Rock and Roll" and #96 on "VH1's 100 Greatest Dance Songs in Rock and Roll" with it being the oldest song in the latter ranking. The song has been featured as one of 500 songs that shaped according to the and for its historical, artistic and cultural significance was added by the to the US National Recording Registry in 2002.