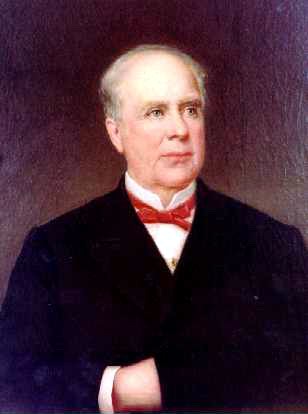 Luke Pryor Blackburn (June 16, 1816ndash September 14, 1887) was a doctor and who, despite only meager previous political experience, served as from 1879 to 1883. He spent much of his life combating in the southern states and is credited with establishing the first successful against the spread of the disease in the valley.

Blackburn was the first doctor elected governor of the Commonwealth and was the only one until the election of in 2003.

One incident stands in dark contrast to the rest of Blackburn's life. During the Civil War, he deliberately shipped trunks of clothing and linens contaminated with yellow fever to Northern cities in order to begin a of the disease and cripple the Union economy. Though it was later discovered that s are responsible for the spread of yellow fever, the plot is believed to be one of the earliest attempts at in the United States.

Luke Pryor Blackburn was born in on June 16, 1816, the fourth of thirteen children born to Edward M. (Ned) and Lavina Bell Blackburn. Many members of his family were involved in politics, including his distant cousin, statesman ; his maternal grandfather, John Bell, who represented Fayette County at Kentucky's first constitutional convention in 1799; his uncle , who served as lieutenant governor under James Turner Morehead; and his younger brother , a congressman from Kentucky and civilian governor of the .

It was, however, the profession of another relativendash his uncle Churchill Blackburn, a noted physician in ndash that interested him. Shortly after his sixteenth birthday, young Luke began a two-year apprenticeship under his uncle, helping him minister to residents of Kentucky's during an outbreak of in 1833. Following his apprenticeship, Blackburn entered medical school at , earning an M.D. in March 1835. He then began practicing in .

It was during a cholera outbreak in nearby that Blackburn's reputation as a physician and philanthropist began to escalate. He often offered his services for free to ailing victims of the disease.

After a failed business venture involving the manufacture of and bagging, Blackburn was elected as a Whig

Dire health conditions and a booming economy in the Mississippi River valley drew Blackburn away from Kentucky to the city of in 1846. Shortly after arriving, Blackburn became the manager of the city hospital. The following year, he served as the city's health officer. In 1848 and 1853, he organized the first successful quarantines against the spread of yellow fever in the Mississippi Valley, bringing him national acclaim.

His concern for boatmen working along the Mississippi River lead him to set up a hospital for them using his own money. Congressman used Blackburn's generosity to chide Congress for not providing adequate medical facilities for the boatmen. Brown's pleas were heeded, with Congress appropriating $60,000 for the construction of six facilities along the Mississippi. One of these facilities was constructed in Natchez, and Blackburn was named chief physician.

His successful quarantines in Natchez led Blackburn to lobby the to establish a quarantine station along the river below New Orleans to prevent the spread of yellow fever upstream. The measure was approved in 1855 over the protests of merchants who claimed it would hurt commerce, though the merchants' considerable influence rendered it ineffective in subsequent years.

In November 1856, Blackburn's wife Ella, who suffered from and a nervous condition, died of "a fever." Grief-stricken, Blackburn was encouraged by family members to take the European trip he'd often talked about taking. In 1857, Blackburn made the trip, touring the hospitals , , , and . While in Paris he encountered fellow Kentuckian Julia M. Churchill. Upon returning to Kentucky in November 1857, Blackburn married Churchill. The couple took up residence in New Orleans.

Role in the Civil War

Upon the outset of the Civil War, Blackburn, a Confederate sympathizer, volunteered as a citizen agent. After serving as an unsuccessful envoy to Louisiana for Kentucky Governor , he was assigned to the staff of General . In 1863, Blackburn was assigned by Mississippi Governor to travel to and collect supplies for s. Blackburn's vessel was captured by Federal forces while trying to run a blockade at ; however, it was assumed that Blackburn was a civilian passenger, and he was released.

On two separate occasions in 1864, Blackburn sailed for the Caribbean island of , where yellow fever was running amok. On both occasions, he arranged for trunks filled with linens and clothing used by his patients to be imported to Northern cities, believing yellow fever could be introduced into the area in this way. It was later alleged that some of the contaminated clothing was intended for President Lincoln himself.

In April 1865, Blackburn's plot was uncovered. The U.S. Bureau of Military Justice charged him with conspiracy to commit murder, but he remained in Canada to avoid prosecution. He was, however, tried in Toronto for violating Canada's neutrality in the war, but was acquitted.

Blackburn returned to his home state in 1872 and resumed his medical and philanthropic efforts, combating yellow fever in (1873), (1877), and (1878). The admiration garnered through his efforts led to a successful bid to become in 1879. Blackburn garnered 55.4% of the popular vote, defeating candidates Walter Evans and C. W. Cook. [cite web |url=http://www.kdla.ky.gov/resources/Governors of Kentucky_pg4.htm |title=Kentucky's Governors: 1879ndash 1907 |publisher=Kentucky Department of Libraries and Archives |accessdate=2007-05-02]

Reform of Kentucky's penal system was the hallmark of Blackburn's term as governor. He appointed a commission to oversee drastic improvements at the eighty-year-old in Frankfort, ominously dubbed "Kentucky's by some. He secured funding for the at , though it never became what Blackburn envisionedndash a facility that would "teach and train the prisoner in such a manner that on his discharge, he may be able to resist temptation and inclined to lead an upright and worthy life." He also hired out convicts to work on public projects.

Blackburn financed his reform measures by increasing the state's . The use of tax dollars to improve the lot of prisoners was an unpopular action, and had prevented previous prison reform advocates from accomplishing the needed improvements. Blackburn forced the General Assembly's hand by liberally invoking his power of executive pardon, releasing the aged and infirm to alleviate overcrowding. This action earned him the nickname "Lenient Luke."

Other accomplishments during Blackburn's administration included revamping the state's district courts, creating a state superior court, and reorganizing the Agricultural and Mechanical Collegendash later, the .

Following the expiration of his term in 1883, Blackburn retired from politics and returned to his medical practice once again, briefly operating a in . He died on September 14, 1887 in , and is buried at Frankfort Cemetery. His monument, erected by the state, features a depicting the , a tribute to his life of service and alleviation of suffering. In 1972, the state opened the , a 400-acre minimum security prison near Lexington named for Governor Blackburn.

* [http://www.rootsweb.com/~kygenweb/kybiog/jefferson/blackburn.lp.txt Biography from Kentucky: A History of the State]