Two Pints of Lager and a Packet of Crisps

Two Pints of Lager and a Packet of Crisps

For the song by Splodgenessabounds, see Two Pints Of Lager And A Packet Of Crisps Please.

Two Pints of Lager and a Packet of Crisps was a BBC sitcom created and written by Susan Nickson. It is set in the town of Runcorn in Cheshire, England, and initially revolves around the lives of five twenty-somethings, played by Ralf Little (Jonny Keogh), Sheridan Smith (Janet Smith/Keogh), Will Mellor (Gaz Wilkinson), Natalie Casey (Donna Henshaw) and Kathryn Drysdale (Louise Brooks). Little left the programme after the sixth series, and Jonny was killed off-screen at the start of series 7. For the ninth and final series Smith and Drysdale also departed, with Freddie Hogan and Georgia Henshaw playing new characters Cassie Claypole and Billie McCormack and Luke Gell's existing role as barman Tim Claypole expanded. The core cast have been augmented by various recurring characters throughout the series, including Beverly Callard, Lee Oakes, Hayley Bishop, Alison Mac, Thomas Nelstrop and Jonathon Dutton. The show was first broadcast in 2001 on BBC Two. The title was inspired by the 1980 hit single "Two Pints of Lager and a Packet of Crisps Please" by Splodgenessabounds.[1]

The original Executive Producer of the show, Geoffrey Perkins, saw writer Susan Nickson's work on Channel 4's Lloyd's Bank Film Challenge, entitled "Life's A Bitch", which starred Sean Hughes and Kathy Burke. Aged just fourteen, Nickson was asked by Perkins (who was also Head of Comedy at the time) to come and work with the BBC after a few years; consequently, Nickson created Two Pints when she was just eighteen.

The BBC tried to persuade the producers of the Channel 4 soap opera Hollyoaks to get Will Mellor and Natalie Casey to work with them, when they appeared in the show. Ralf Little and Sheridan Smith were cast soon after completing work on another BBC sitcom The Royle Family, in which Little had also performed with Smith. Although initially reluctant, he agreed to audition when he realised that Two Pints would be very different from The Royle Family. Kathryn Drysdale was brought in after producers saw her perform at drama school.

The show's unbroadcast pilot starred Little and Mellor, though the characters of Janet, Louise and Donna were portrayed by other actresses, including Lucy Punch as Louise. Smith, Casey and Drysdale were then cast to be in the first series, and have been acting in the show ever since. Little and Smith, and Mellor and Casey respectively play couples Jonny and Janet, and Gaz and Donna. Mellor and Casey also played couples on-screen in the past when they portrayed a couple in Hollyoaks. Smith stated how lucky she was to work with Little after starring together before, as playing such a close couple would have been awkward for them both. Mellor stated in a past interview how he sees Casey as a younger sister to him, and mentions that he feels awkward during kissing scenes because of this. Smith also classes Casey as the "mummy" in the show, due to her knowledge and problem solving skills. Typically, episodes end with a particularly dramatic scene, such as Jonny breaking the news to Janet about her parents turning down his request for her hand in marriage.

BBC Two broadcast the first series, BBC Choice screened series two but was re branded as BBC Three shortly before it screened series three, and has shown the first run of each new series ever since. BBC Two also repeated the show, though only once, previously shown every Thursday. Series four ended with Jonny being shot by armed police, and viewers were asked to vote, by text or phone, on Jonny's fate. Series five began with a funeral, which was revealed to be that of Donna's mother, Flo. Some series are accompanied by a special programme exposing errors that occurred during the filming. The show, titled Two Pints of Lager Outtakes, features interviews with cast and crew, each explaining the difficulties of getting various scenes to be performed as expected.

Although Two Pints is largely comedy, it sometimes, especially at the end of a series, becomes more dramatic and serious. Such storylines have included Janet and Jonny's split, Jonny's shooting and Janet's imminent departure as a cruise singer.

Will Mellor has described the show as being "driven by sex and alcohol" and the show is known for its adult, sometimes scatological humour, mostly involving references to sex and private bodily functions. Vulgar language is also used, except that the word 'fuck' is uttered only in the last episode of each series.[4]

The first six series with the original cast including Ralf Little ran until 2006 when Little said he would not return to the series, saying he thought the character had come to a natural end. Will Mellor hinted at the series continuation in television interviews, one being Loose Women, and more or less confirming it on The Paul O'Grady Show, with statements such as "we'll keep on making it". Ralf Little announced during an interview for This Morning on 19 September 2007 that he would not be returning for the following series due to an overwhelming schedule, and Jonny Keogh was therefore killed off-screen in the first episode of the seventh series.

An eighth series was confirmed by Will Mellor in an interview in the Metro on 21 April 2008, in which he said that they would be filming the series from November 2008 to January 2009.[5] In January 2009, the BBC announced recording dates for the next series at BBC Television Centre from 1 February to 3 April. A special edition for Comic Relief was also recorded on 25 January. The eighth series began airing on 8 March 2009 starting with a Comic Relief special, which featured characters from Coming of Age and Grownups, as a curtain raiser, with subsequent episodes as normal. Natalie Casey, Kathryn Drysdale, Luke Gell, Will Mellor and Sheridan Smith all returned and the new character of Wesley was played by Thomas Nelstrop.[6]

Two special episodes of Two Pints of Lager and a Packet of Crisps were filmed in 2009.[7] The first was set a few minutes after the ending of the previous episode, its cast being limited to Janet, Wesley and Tim, and was recorded on 13 August 2009 at BBC TV Centre. It was a musical extravaganza set entirely inside the Archer and was broadcast on 15 December 2009.

The second, "Sliding Gaz", was recorded on 18 August 2009 and shown on 22 December 2009.[8] The cast consists of Donna and Gaz only and shows Donna in a "sliding doors" technique, imagining Gaz being healthy and also paralysed.

In April 2010, it was revealed that the show was to return, albeit 'refreshed' by the BBC, which could mean cast changes, and the loss of the creator of the show, Susan Nickson, who is reportedly moving on to work in America.[9] Location filming for series 9 is set to begin in Runcorn on 25 January as reported in The Runcorn Weekly News.[10]

To celebrate the tenth anniversary of the show the official BBC website put numerous of the viewers favourite clips where uploaded including Will Mellor and Natalie Casey presenting a 5 minute show about the 10 things you didnt know about the show.

A plot summary of the new 2011 series was then revealed by the BBC.[11] Original cast members Sheridan Smith and Kathryn Drysdale announced in 2010 that they would not be returning to the show.[citation needed]

Main article: List of Two Pints of Lager and a Packet of Crisps episodes 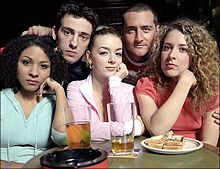 Many of the places featured in Two Pints are real: