Door furniture (British and Australian English) or Door hardware (North American English) refers to any of the items that are attached to a door or a drawer to enhance its functionality or appearance. 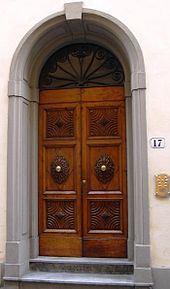 Design of door furniture is an issue to disabled persons who might have difficulty opening or using some kinds of door, and to specialists in interior design as well as those usability professionals which often take their didactic examples from door furniture design and use.

Items of door furniture fall into several categories, described below. 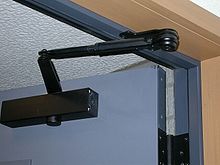 A door closer is a mechanical device that closes a door that is open.

A typical peephole in a door, allowing the person to see who is outside the door without opening it.
Main article: Hinge

A hinge is a component that attaches one edge of a door to the frame, while allowing the other edge to swing from it. It usually consists of a pair of plates, each with a set of open cylindrical rings (the knuckles) attached to them. The knuckles of the two plates are offset from each other and mesh together. A hinge pin is then placed through the two sets of knuckles and usually fixed, to combine the plates and make the hinge a single unit. One door usually has about three hinges, but it can vary.

Doors generally have at least one fixed handle, usually accompanied with a latch (see below). A typical "handle set" is composed of the exterior handle, escutcheon, an independent deadbolt, and the interior package (knob or lever). On some doors the latch is incorporated into a hinged handle that releases when pulled on.

A lock is a device that prevents access by those without a key or combination, generally by preventing one or more latches from being operated. Often accompanied by an escutcheon. Some doors, particularly older ones, will have a keyhole accompanying the lock.

Most doors make use of one or more fasteners to hold the door closed. Typical or common fasteners include:

Numerous devices exist to serve specific purposes related to how a door should (or should not) be used. See:

A number of items normally accompany doors but are not necessarily mounted on the door itself, such as doorbells.