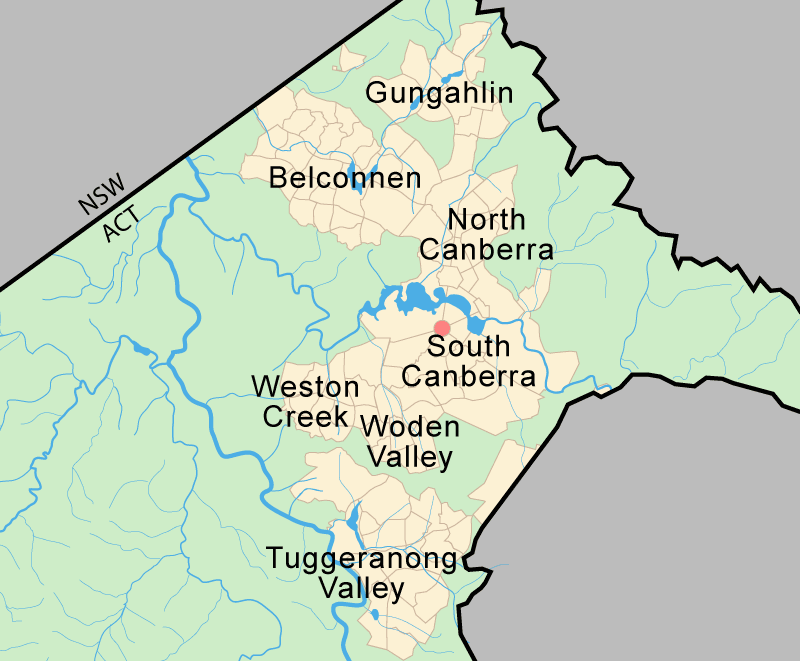 Capital Hill (coord|35|19|S|149|07|E|) ,(postcode: 2600) is the location of , at the south apex of the land axis of the . The site was selected as the location of the "Capitol" in 's Canberra design in 1912, which he envisaged to be "either a general administration structure for popular receptions and ceremony or for housing archives and commemorating Australian Achievements". [ cite book | title = Parliamentary Zone Development Plan| publisher = | date = 1982| pages = 125 | id = ISBN 0-642-88974-0 , p12] The proposed building is commemorated in the name of the "Capitol Theatre", Manuka. However, Griffin's name for the hill was subsequently changed to Capital Hill.

The Parliament buildings were to be located a little further down the hill towards at Camp Hill, between Capital Hill and the Provisional Parliament House. Griffin opposed the plan to build a Provisional Parliament House on the lower slopes of Camp Hill, because he considered that it would make it difficult to build the permanent Parliament House on Camp Hill, as the provisional building would have to be demolished. ["Parliamentary Zone Development Plan", p18] In fact, in the 1958 and 1964 Holford plans for the Parliamentary Triangle, the site for the New Parliament House was moved to the lake shore, partly for this reason. Holford also reportedly said that a lakeside site would discourage politicians from seeing themselves as superior to ordinary people. However, in 1978 Parliament voted to move the Parliament to its permanent location on Capital Hill, which it saw as befitting the eminence of the institution. Construction of the new parliament buildings commenced in 1981 and the new building was officially opened by Queen Elizabeth II in 1988, when the Parliament relocated from the old building.

Capital Hill was previously named Kurrajong Hill and is around 2.5 km², surrounded by a circular road (State Circle). Until the construction of the current Parliament House, the hill was covered with scrubby native bushland. .

The streets that go out from Capital Hill are named after Australian capitals, and their direction roughly corresponds to the direction of that capital city, Brisbane Ave, Sydney Ave, Canberra Ave, Melbourne Ave, Adelaide Ave, Perth Ave, Hobart Ave and Darwin Ave. The streets which surround the hill in concentric circles are named after increasing spheres of influence with the inner-most circle called Parliament drive and then spanning out to Capital Circle, State Circle, National Circuit, Dominion Circuit and Empire Circuit.When Griffin drew up his plans in 1912, there was still some optimism that might join the . Griffin's plans included eight avenues radiating out from Capital Hill named after the capitals of the six states, the capital of the Northern Territory and the capital of New Zealand. Before the name Wellington Avenue was gazetted, it was realised that New Zealand was not going to become part of a Confederation of and the name was replaced by Canberra Avenue. Griffin planned that the state capital city avenues were terminated with a park named after the generic botanical name for a native plant from that particular site; for example, Telopea Park is named after the waratah, the floral emblem of New South Wales, and is at the end of Sydney Avenue, named after the capital of New South Wales. The name of the precinct of Manuka is a remnant of Griffin's naming scheme. Another remnant of Griffin's nomenclature was the "Wellington Hotel", formerly on the corner of Canberra Avenue and National Circuit, which was demolished and replaced by the hotel known as of 2007 as "Rydges Capital Hill Canberra".