The Krofft Supershow is a Saturday morning children's variety show, produced by Sid and Marty Krofft. It aired for two seasons from September 11, 1976 to September 2, 1978 on ABC.

The show was composed of several live action segments, hosted by "Kaptain Kool and the Kongs", a rock band created for the series. The season one (1976–1977) segments were "Dr. Shrinker", "Electra Woman and Dyna Girl" and "Wonderbug", plus re-runs of The Lost Saucer for the first half of the season (they were dropped when the show was cut from 90 minutes to one hour). For season two (1977–1978), "Dr. Shrinker" and "Electra Woman and Dyna Girl" were dropped and replaced with "Bigfoot and Wildboy" and "Magic Mongo." Each live action section was approximately 15 minutes in length.

Instead of a third season, the show was massively revamped (and moved to NBC) in order to feature the then-popular Bay City Rollers. Now retitled The Krofft Superstar Hour, Kaptain Kool and the Kongs were replaced by the Rollers, and new live action segments "Horror Hotel" and "The Lost Island" replaced the older live action segments.

Kaptain Kool and the Kongs 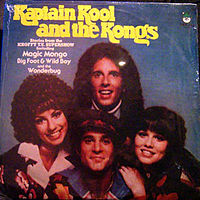 For the first season, Kaptain Kool and the Kongs were portrayed as a wacky glam rock band, the segments were filmed at the short-lived World of Sid and Marty Krofft indoor amusement park in Atlanta. For season two, their image was toned down somewhat, and they were downsized from a five to a four-person band and their segments were now filmed in a studio with an audience of children. In either incarnation, the band would introduce the other live action segments, as well as perform skits and songs. Most of the songs were written by the Osmonds.[1] After they were replaced by the Bay City Rollers, the group made appearances on other Sid and Marty Krofft productions, including Donny & Marie, The Brady Bunch Variety Hour and The Krofft Komedy Hour. They also made an appearance on Dick Clark's American Bandstand and they starred in two primetime TV specials featuring previews of ABC's Saturday morning lineup.

Dr. Shrinker is an evil scientist with a lab on an uncharted island. When teenagers Brad, B.J. and Gordie are stranded on the island, Dr. Shrinker subjects them to his shrinker machine. They manage to escape the lab in miniature form; the series follows their adventures as they try to evade the clutches of the mad scientist.
Cast:

Lori and Judy, reporters for Newsmaker magazine, are secretly Electra Woman and Dyna Girl, crime fighting superheroines. Assisted by their friend Frank Heflin, they fought such supervillains as the Pharaoh, the Sorcerer, Glitter Rock, Ali Baba, Spider Lady, and the Empress of Evil.
Cast:

Barry, C.C. and Susan are three teenage friends who fixed up an old dune buggy (which they dubbed "Schlepcar"). When they attached a magic horn to the car, Schlepcar comes to life as Wonderbug. Wonderbug could fly, and would help the teens fight crime.
Cast:

When teenagers Donald, Lorraine, and Kristy find an old bottle, they discover it is the home of Mongo, a genie. Mongo's magical attempts to help his young masters lead to many wacky misadventures.

After Wildboy was orphaned in the Pacific Northwest, he was found and raised by Bigfoot, the legendary man-beast of the forest. The two work together to fight those who would harm the forest. They were aided in the first season by Suzie, 12-year-old daughter of Ranger Lucas; in the second season, Suzie was replaced by Cindy, a young archeology student.

The episodes of "Bigfoot and Wildboy" that aired on The Krofft Supershow were 15 minutes in length. In 1979, ABC brought back the show as a stand-alone series by editing the 15 minutes segments into 30 minute episodes. New episodes were also filmed and aired in the summer of 1979.