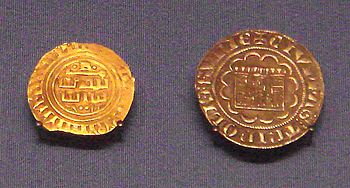 Bezant is a medieval term for a gold coin from the Byzantine Empire, which term is derived from the Greek name Βυζάντιον ("Byzántion") for the relatively minor city which in the 4th c. became the capital of the Eastern Roman Empire, renamed Constantinople by the Roman Emperor Constantine the Great. The Byzantine Empire was a major source of gold coins since the time of Constantine.

Gold coins were not commonly minted in early medieval Western Europe, silver and bronze being the currency of choice, but they did circulate there in small numbers, originating in the Mediterranean region. Typically gold coins were used when payments had some special ritual significance, or to show a sign of respect. Byzantine gold coins, in particular, were highly prized, as were the later Islamic ones. These gold coins were commonly called bezants, taken from the word Byzantium, the Latinized form of the original Greek name (Βυζάντιον, Byzántion) of the capital, Constantinople, where the gold coins typically came from and were associated with, since the time of Constantine I. The first "bezants" were Byzantine solidi. Later, the term also referred to gold dinars minted in the Islamic Caliphates, themselves modelled on the solidus.

The term "Bezant" was used by Venetians to refer to the Egyptian gold dinar and Marco Polo referred to the bezant in the account of his travels to East Asia when describing the currencies of the Yuan Empire.[1] His descriptions were based on the conversion of 1 bezant = 20 groats = 133⅓ tornesel.[1]

Gold coinage was re-introduced to Europe in 1252 when the city of Florence began minting gold coins known as florins.

Gold coins in 10th and 11th century England were valued at two shillings sterling. The gold:silver ratio was 1:9.

In heraldry, bezants are deemed a category of the roundel, of tincture or, that is to say they appear as gold discs. Their name as a charge comes from the name of the coin. As with many charges in heraldry, the crusading era supplied many motifs, and it may have been whilst on crusade that many Western European knights first came into contact with Byzantine gold coins, and were perhaps struck with their fine quality and purity. During the Fourth Crusade the city of Constantinople, anciently Byzantium, was sacked by the Western Christian forces in 1204, ostensibly due to the non-payment by the Emperor of his share of the costs of the expedition. During this sacking of the richest city of Europe the gold bezant would have been very much in evidence, many of the knights no doubt having helped themselves very liberally to the booty. This event took place at the very dawn of the widespread adoption of armourials by the knightly class, and thus it may have been an obvious symbol for many returned crusaders to use in their new arms. A "field" or "bordure" semé with (strewn with, lit. "sown" with, as scattered seed) bezants is termed bezantée