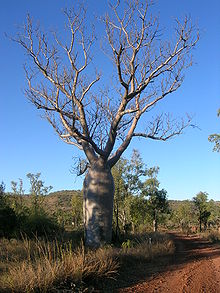 Adansonia gregorii, commonly known as the boab, it is a tree in the family Malvaceae. As with other baobabs, it is easily recognised by the swollen base of its trunk, which gives the tree a bottle-like appearance. Endemic to Australia, boab occurs in the Kimberley region of Western Australia, and east into the Northern Territory. It is the only baobab to occur in Australia, the others being native to Madagascar (six species) and mainland Africa and the Arabian Peninsula (one species).

Baobab is a medium sized tree ranging in height from 5 to 15 meters, usually between 9 and 12 metres, with a broad bottle-shaped trunk.[1] Its trunk base may be extremely large; trunks with a diameter of over five metres have been recorded. Baobab is deciduous, losing its leaves during the dry winter period and producing new leaves and large white flowers between December and May.[1]

The common name "boab" is a shortened form of the generic common name "baobab". Although boab is the most widely recognised common name, Adansonia gregorii has a number of other common names, including:[2] 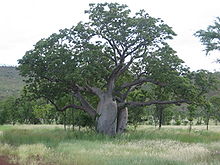 A boab tree in the Kimberley, Western Australia in February

The plant has a wide variety of uses, most parts are edible and is the sources of a number of materials. Its medicinal products and the ability to store water through dry seasons has also been exploited.[3]

Indigenous Australians obtained water from hollows in the tree, and used the white powder that fills the seed pods as a food. Decorative paintings or carvings were sometimes made on the other surface of the fruits. The leaves were used medicinally.

A large hollow boab just south of Derby, Western Australia is reputed to have been used in the 1890s as a lockup for Aboriginal prisoners on their way to Derby for sentencing. The Boab Prison Tree still stands, and is now a tourist attraction.[4]