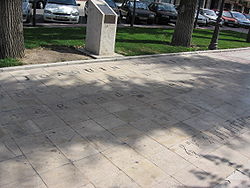 Monument devoted to Joaquín Rodrigo's Concierto in the city of Aranjuez

The Concierto de Aranjuez is a composition for classical guitar and orchestra by the Spanish composer Joaquín Rodrigo. Written in 1939, it is probably Rodrigo's best-known work, and its success established his reputation as one of the most significant Spanish composers of the twentieth century. 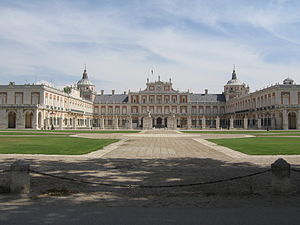 The Concierto de Aranjuez was inspired by the gardens at Palacio Real de Aranjuez, the spring resort palace and gardens built by Philip II in the last half of the 16th century and rebuilt in the middle of the 18th century by Ferdinand VI. The work attempts to transport the listener to another place and time through the evocation of the sounds of nature.

According to the composer, the first movement is "animated by a rhythmic spirit and vigour without either of the two themes... interrupting its relentless pace"; the second movement "represents a dialogue between guitar and solo instruments (cor anglais, bassoon, oboe, horn etc.)"; and the last movement "recalls a courtly dance in which the combination of double and triple time maintains a taut tempo right to the closing bar." He described the concerto itself as capturing "the fragrance of magnolias, the singing of birds, and the gushing of fountains" in the gardens of Aranjuez.

Rodrigo and his wife Victoria stayed silent for many years about the inspiration for the second movement, and thus the popular belief grew that it was inspired by the bombing of Guernica in 1937. In her autobiography, Victoria eventually declared that it was both an evocation of the happy days of their honeymoon and a response to Rodrigo's devastation at the miscarriage of their first pregnancy. It was composed in 1939 in Paris.[1]

Rodrigo, blind since age three, was a pianist.[3] He did not play the guitar, yet he still managed to capture the spirit of the guitar in Spain.

Composed in early 1939, in Paris, amid the tensions of the impending war, it was the first work Rodrigo had written for guitar and orchestra. The instrumentation is unusual: rarely does the guitar face the forces of a full orchestra. Instead, the guitar is never overwhelmed, remaining the solo instrument throughout.

This concerto is in three movements, Allegro con spirito, Adagio and Allegro gentile.

The second movement, the best-known of the three, is marked by its slow pace and quiet melody, introduced by the English horn, with a soft accompaniment by the guitar and strings. A feeling of quiet regret permeates the piece. Ornamentation is added gradually to the melody in the beginning. An off-tonic trill in the guitar creates the first seeds of tension in the piece; they grow and take hold, but relax back to the melody periodically. Eventually, a climactic build-up starts. This breaks back into the main melody, molto appassionato, voiced by the strings with accompaniment from the woodwinds. The piece finally resolves to a calm arpeggio from the guitar, though it is the strings in the background rather than the guitar’s final note that resolve the piece. The third movement is in mixed metre, alternating between 2/4 and 3/4.

On 11 December 1940 the concerto received its first performance in Madrid, at the Teatro Español de Madrid conducted by Jesús Arámbarri, with the same soloist, de la Maza.

A number of musicians have since reinterpreted the work, usually the second movement, perhaps most famously jazz legend Miles Davis in the company of arranger Gil Evans. On the album Sketches of Spain (1960), Davis says: "That melody is so strong that the softer you play it, the stronger it gets, and the stronger you play it, the weaker it gets."[4] Violinist Ikuko Kawai's version, "Aranjuez", is an upbeat, faster update to the work. Clarinettist Jean-Christian Michel's transcription of "Aranjuez" has sold some 1,500,000 copies.[citation needed] Guitarist Buckethead covered "Sketches of Spain" on his album Electric Tears as a tribute to Miles Davis. Bassist Buster Williams performs a solo bass transcription of the second movement of Concierto de Aranjuez on his album Griot Liberté (2006).

Until asked to perform and interpret Concierto de Aranjuez in 1991, the Spanish flamenco guitarist Paco de Lucía was not proficient at reading musical notation. De Lucía claimed in Paco de Lucía-Light and Shade: A Portrait that he gave greater emphasis to rhythmical accuracy in his interpretation of the Concierto at the expense of the perfect tone preferred by classical guitarists. Joaquín Rodrigo later declared that no one had ever played his composition in such a brilliant manner.

The legendary jazz pianist Chick Corea used the beginning of the second movement as an introduction to his hit composition Spain. Al Jarreau used the same intro in his arrangement of Spain as a vocalese.

A major performance of the Concierto, which stands strongly with Miles Davis's Sketches rendition, is that by Jim Hall on his 1975 album, Concierto (also featuring Chet Baker, Paul Desmond, Ron Carter, Steve Gadd, and Roland Hanna). Hall's strong lyricism and outstanding sense of tone particularly giving the piece (performed in full and running to over 19 minutes) an understated power. The Concierto is, in many ways, the centrepiece of the album, which is often regarded as Jim Hall's peak.

The piece also featured in the film Brassed Off, with Ewan McGregor, and was played by the Grimethorpe Colliery Band.[5] In that film, it is sometimes referred to as the 'Concierto d'Orangejuice.' This is a familiar name in the brass band community (although it is often shortened to 'Orange Juice'); the arrangement they refer to was created by Kevin Bolton.

The Modern Jazz Quartet has several recordings of the Concierto, one with Laurindo Almeida, another on the Last Concert CD and In Memoriam CD. Jim Roberts of Orlando FL, has two recordings, one with his trio and another with his Saxtet, both very listenable arrangements.

A version entitled "Rodrigo's Guitar Concerto de Aranjuez (Theme from 2nd movement)" was released by The Shadows in 1979.

A version of the Adagio was released as a single entitled "Rodrigo's Guitar Concerto" by Geoff Love, (under the name of Manuel & the Music of the Mountains) in 1976. This reached No. 3 in the British singles chart.

Lebanese female singer Fairuz has also used the music of the second movement on one of her songs "Le Bairut" (To Beirut). Also the Egyptian born Greek singer Demis Roussos used the same music for his song "Follow Me". In 1967, the French singer Richard Anthony brought out a single named "Aranjuez Mon Amour", with lyrics by Guy Bontempelli.

Led Zeppelin's keyboardist/bassist John Paul Jones incorporated parts of the music during an improvisation section of their song "No Quarter" on their 1977 tour.

André Rieu performed the piece accompanied by the church bells of Maastricht in a performance available on the DVD Songs From My Heart.

On 30 December 1991, Rodrigo was raised to the Spanish nobility by King Juan Carlos I with the title of Marqués de los Jardines de Aranjuez (English: Marquis of the Gardens of Aranjuez).[6]

The Adagio is likely the most famous, and most recognizable part of the piece, and used in numerous movies, television shows, and commercials. Consequently many people will have heard Concierto de Aranjuez without knowing its title or composer. Many listeners and musicians assume that the piece is much older than it is, which became a problem for Rodrigo, since performers frequently failed to pay him royalties because they assumed the piece was out of copyright.[citation needed]