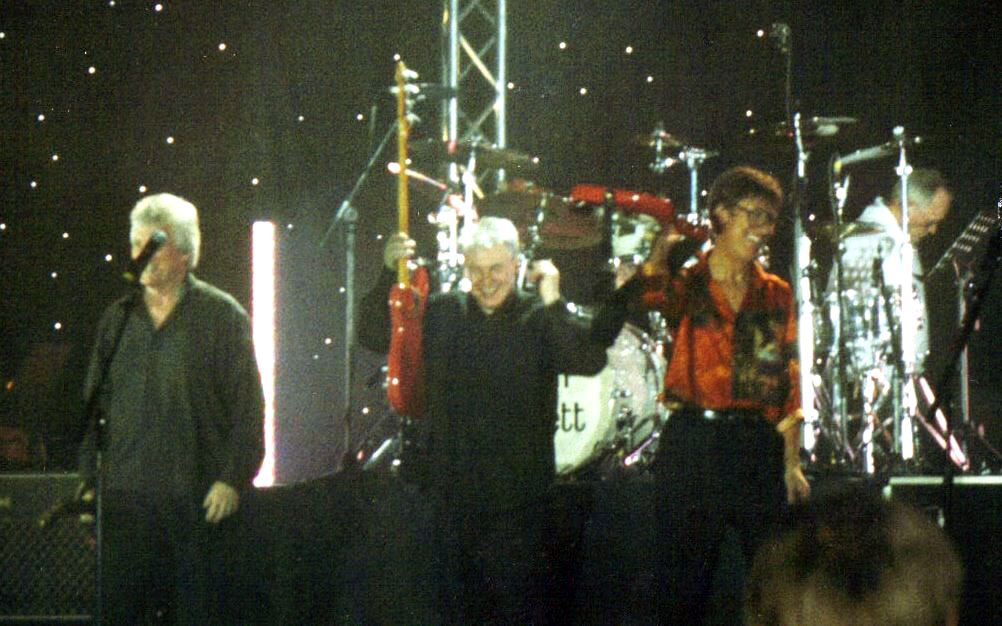 The Shadows are an English instrumental and vocal group active from the 1950s to the 2000s.

Formed initially as a backing band for , they took the name The Drifters until finding out that there was already a thriving American band with that name. The original members were founder Ken Pavey (born 1932), Terry Smart on drums (born 1942), Norman Mitham on guitar (born 1941), on guitar and Harry Webb (before he became Cliff) on guitar and vocals. The original Drifters had no bass player. Samwell wrote the group's first hit record "" which is often mistakenly attributed to "Cliff Richard and The Shadows". None of the original Drifters were still in the group at the time they officially became The Shadows.

The name was changed to Cliff Richard and The Shadows shortly after first manager Johnny Foster discovered the group, and they were quickly signed up for an appearance on Jack Good's "Oh Boy!" television series. Producer of EMI signed Cliff, and asked Johnny Foster to recruit a better guitarist, so Foster went back to 's 2i's coffee bar (then famed for the strength of musical talent performing there, particularly in groups) in search of guitarist . Sheridan was not there but Foster's attention was caught by another musician, who was tall, good looking, played guitar well and even had style glasses.

Guitarist and singer was playing in a skiffle band with his friend . The pair had travelled from Newcastle to London to become musicians and were at the time surviving on very little money. Foster offered Hank the job and he accepted on condition that his friend Bruce would also be allowed to join. New manager Franklin Boyd could see that the pair worked well together, and they were employed as lead and rhythm guitarists respectively. Ian Samwell was moved to bass until he was replaced by the Most Brothers's bass guitarist . Drummer Terry Smart left shortly after this and was replaced at Harris's suggestion by . The Drifters' fully professional lineup was now complete, and they became The Shadows in early 1959. Johnny Foster continued for a time as Cliff's personal manager, and Samwell wrote several additional songs for The Drifters and The Shadows before moving on to write and produce for other artists. Tony Meehan later recalled that Cliff, backed by Hank, Bruce, Jet and himself had all played together a year beforehand at least once at the 2is coffee bar in Soho, London.

The group started recording and performing with Cliff Richard and released two singles in their own right in 1959. ("Feelin' Fine"/"Don't Be A Fool With Love") and ("Jet Black"/"Driftin'"), The first two tracks were vocal numbers and the second pair were instrumental. Neither disc charted. A further (vocal) disc ("Saturday Dance"/"Lonesome Fella") also failed to chart. The instrumental "Chinchilla" was also included on a four track soundtrack EP by Cliff Richard and the Drifters called Serious Charge released in early 1959 along with the film of the same name.

In 1960, the band released "Apache", an instrumental by Jerry Lordan, which topped the charts for 5 weeks. Further hit singles followed, notably "Wonderful Land", another Lordan composition with lush orchestral backing showing a very different side to the group and staying at the top of the charts even longer than Apache (8 Weeks). This record, and "Kon Tiki" six months earlier also reached number one (1 week). The Shadows played on several more chart-toppers as Cliff Richard's band. This group, referred to subsequently by fan as "The Original Shadows", had a raw gutsy appeal and was responsible for seven hit records.

In October 1961 Tony Meehan was replaced by and in April 1962 Jet Harris was replaced by , also known as Licorice. Both Bennett and Licorice were old friends from the 2I's days and they had all played together in different scratch line-ups. The Marvin-Welch-Bennett-Locking line-up lasted for only 18 months but convinced the fans, diversified the sound and held its own in the face of the rise of , spearheaded by . This Shadows line-up produced a further 7 hits, two of which, "Dance On" and "Foot Tapper" topped the charts.

In October 1963 Licorice Locking left to spend more time as a . The band had met on tour playing with other bands and had been impressed by his tight punchy playing, so they invited him to take over on bass. This final and longest-lasting line-up consolidated into a fine musical combo, innovating in numerous ways as they tried different guitars and developed a wider range of musical styles and a higher level of overall musicianship. They produced some impressive albums but the chart positions of the singles began to ease back. The line-up had 10 hits but the most successful, "", was also the first.

During the 1960s the group appeared with Cliff Richard in the films "The Young Ones", "Summer Holiday", "Wonderful Life", "Finders Keepers" and as marionettes in the film "". They also appeared on stage in . "Aladdin and his Wonderful Lamp" was put on in 1964 at the and featured as and Cliff as Aladdin, and The Shadows as Wishee, Washee, Noshee and Poshee. Cinderella was staged at the Palladium in 1966 featuring Cliff as and The Shadows as the , The film and stage roles were more than just performances; they allowed the group to develop their art as songwriters. They wrote only a few songs for the earliest movie, 1961's "The Young Ones", but by the time they came to make "Finders Keepers" in 1966, almost the entire soundtrack was credited to the Marvin-Welch-Bennett-Rostill team.

The line-up split in December 1968, after recording the 10th anniversary album "Established 1958" with Cliff Richard, featuring a mixture of tracks with Cliff Richard, and instrumental tracks featuring just The Shadows. All tracks were written by the group. By this time they seemed to have done everything and Bruce Welch decided to leave. This was almost the end of the band, although an album ("Shades of Rock") and a tour of followed without Bruce, and with on keyboards; in Hank's words, they did it 'for the Yen'. The tour was not considered artistically successful, and the resulting live LP is not held in high regard, even though it does feature an unusually long version of "" in which Hank plays both acoustic and electric guitar.

During the early 1970s, Hank and Bruce had a second career as vocal group with Australian as third vocalist. Farrar provided a magnificent high voice and terrific skill as an arranger. They recorded two critically acclaimed albums and several singles and, without Bruce, a third album "Marvin and Farrar", which Hank described as "Frankenstein meets The Beach Boys".Fact|date=December 2007 This group's live performances were hampered by the fact that everyone who saw Hank in his distinctive spectacles expected a performance of the Shadows' greatest hits. As Hank said (interviewed in "Guitar Greats" by John Tobler), "In the Batley Variety Club we walked off stage to the sound of our own footsteps!"

The Shadows as a group reformed in 1973 with Welch back on rhythm guitar but also with on guitar and vocals. Following the death of John Rostill, the group decided not to replace him permanently but instead to book top session bassists for recordings and tours. Dave Richmond and Alan Tarney, who had each provided bass support for Marvin Welch & Farrar, both continued in this role for the reformed Shadows. An album, "Rocking With Curly Leads" featured Hank using to modify his distinctive sound. Some tracks used Farrar as a second lead guitarist, making this album sound fresh and different.

The group were chosen by Boss to perform the Song for Europe in the 1975 Eurovision Song Contest. The Shadows recorded a number of alternatives and played a song each week on a six-week television show hosted by Lulu. The public then voted for the song they liked the best and eventually, "Let Me Be The One" by was chosen to go to the finals in . The group didn't win, coming second to 's "Ding-A-Dong"; author and historian notes in "The Eurovision Song Contest &ndash; The Official History" that they were not a popular choice to represent the UK. [O'Connor, John Kennedy. The Eurovision Song Contest &ndash; The Official History. Carlton Books, UK. 2007. ISBN 978-1-84442-994-3] But the contest re-established The Shadows as a chart act. Other records soon followed, featuring Farrar's strong vocal and writing talents as well as his instrumental skills.

The packaging of the group's greatest hits in Twenty Golden Greats by EMI in 1977 prompted the group to reform yet again for a tour featuring from Sky on keyboards, leading to a number one album and a top ten hit single "". Francis left after that tour and the line-up settled as the Big Three, Hank Marvin, Bruce Welch and Brian Bennett, supplemented on records and gigs by Cliff Hall (keyboards) and Alan Jones (bass).

The group then performed and recorded frequently until 1990, with most of their 1980s albums performing well in the charts. With the exception of "Guardian Angel" which was an album of new material, most of their 1980s albums featured cover versions of then current or classic pop songs, with little original material. The group changed record labels in 1980, switching from EMI to with the aptly titled "Change of Address". The change was necessitated because EMI would not agree to a "tape leasing" scheme, whereby the group would retain copyright of their recordings, but the company would be licensed to publish them for individual albums. This resulted in the group re-recording much of its back catalogue of EMI hits for the Polydor label. The recordings were made using modern techniques (although primarily on analogue equipment, but digitally mastered), but with instruments, amplifiers, and arrangements as close as possible to the originals making it difficult for the casual listener to tell the difference. This has allowed the group to package and market their own compilation albums, apparently featuring old hits as well as new. Other albums, such as "Diamonds" feature no new material, being compiled from recent albums. The line-up remained solid until Alan Jones had a bad car accident and Mark Griffiths of the Cliff Richard band and originally from Matthews Southern Comfort was brought in on bass. He and Alan then shared bass duties until 1990 when the band stopped touring and Hank went solo again.

It was , a longtime guitar friend of Hank Marvin who, in 2001 presented Bruce Welch and Jet Harris with his idea to reunite The Shadows, winning their enthusiastic support, with Jet Harris even addressing Field's intention in a newspaper article and writing "Good luck, Roger" on Field's Fender guitar. The group re-formed in 2004 for a 'farewell tour', and recorded a new track "Life Story" (written by Jerry Lordan) to accompany a new greatest hits package of the same name which featured 1980s re-recordings of all their 1960s and 1970s hits. This opportunity to see Hank Marvin, Bruce Welch and Brian Bennett, joined on keyboards by Cliff Hall and bass by Mark Griffiths, "one last time" was so successful (and enjoyed by all members) that they decided to embark on an extension to the tour in 2005, this time of . The line-up was almost the same, but Warren Bennett, son of Brian, came in on keyboards instead of Hall. Notwithstanding that this was to be a tour of other countries, they played a final date back in the UK in .

This does not include collaborations with Cliff Richard, solo recordings or those made under the name "Marvin, Welch & Farrar"