The Hyundai i30 is a small family car by South Korean automaker Hyundai Motor Company. The i30 shares its platform with the Kia cee'd, available as a five-door hatchback or estate, with a choice of three petrol and two diesel engines, either with manual or automatic transmissions.

The i30 wagon (estate) is marketed alongside the fourth-generation Hyundai Elantra in the U.S. and Canada as the Elantra Touring.

The second-generation i30 is being introduced as September, 2011 at the Frankfurt auto show.

It was conceived in Russelsheim, Germany at Hyundai's Design and Technical Centre.[2]

The i30 cw (a.k.a Elantra Touring in U.S.) scored high on the U.S. National Highway Traffic Safety Administration) crash tests:[5]

The i30 awarded the full five star safety rating by the Australasian New Car Assessment Program.[6]

The i30 named as safest imported mid–size car in Argentina.[7] 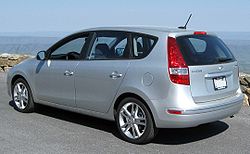 The i30cw was introduced at the Geneva Motor Show in March, 2007, and released in late 2007 in Europe and Australia. The i30cw (a.k.a. i30 estate, also known as Elantra Touring) was released in South Korea at the Seoul Motor Show in 2007,[8] and is marketed worldwide, including in North America for the 2009 model year, as the "Elantra Touring". It is a larger, more roomy version of the i30 hatchback. The i30 cw's maximum cargo volume is 65 cubic feet (1,800 L).

The i30 blue is a variation with Start&Stop technology (called Idle Stop and Go). British versions came with 1.4L,1.6L petrol or a 1.6L diesel engine, in both five-door hatchback or estate body styles. CO2 emission rating for the 1.6L petrol models were reduced to 142g/km (from 152g/km).

The car was unveiled at the 2009 Geneva Motor Show and is produced in Nosovice, Czech Republic. It went on sale in the UK in January 2008[10] and has ISG as an option, costing £200.

In Australia, the Hyundai i30 won the 'Best Mid-size Car Under $28,000'. The 1.6L CRDi i30 is also the cheapest diesel car in Australia, coming in at just $21,490AUD for the basic(SX) model. The model above (SLX) adds Climate Control, Trip computer, leather gear knob and steering wheel (with audio controls), cruise control, body colour door handles, rear armrest with cup holders, 6 speakers (up from four), adjustable lumbar support for the driver, fog lights and 16" alloy wheels. Australian i30 models feature a unique suspension tune for Australian road conditions.

Hyundai's i30 Diesel Picked as Australia's Car of the Year[13]

The Hyundai i30 was judged the Supreme Winner in the 2009 AA Motoring Excellence Awards in New Zealand.[18]

Most Satisfying Car In Britain. The i30 won the Driver Power Top 100 survey to be named by owners as the most satisfying car to own. Auto Express magazine surveyed the reliability and satisfaction survey, completed by over 23,000 drivers.[19][20]