The Korea National League is a semi-professional association football league, the second tier of the South Korean football league system. It consists of fifteen member clubs. The season is composed of two sections with the fourteen member clubs playing each other once in each section. The two section winners and the two runners-up from both stages progress to the post-season season playoffs to decide the league champion. In the event of the same team winning both sections, that team is pronounced champion without the need for the playoffs.

The league was officially founded in 2003 as the K2 League, to raise the level of competition in Korea. Prior to that, various cup competitions were run by the governing body of semi-professional football. Competitions under the present body can be traced back to 1964, with the participants being mostly works sides of the major industries in Korea (banks, construction companies and the like). It was rebranded Korea National League at the beginning of 2006.

Ever since the creation of the league, hopes had been high that a system of promotion and relegation would be implemented between the league and the K-League, the professional football league in Korea. In 2006, it was agreed that, subject to meeting certain financial requirements, the National League champions would be eligible for promotion. Goyang Kookmin Bank, who triumphed over Gimpo Hallelujah to win the 2006 title, were the first side eligible for promotion, however they controversially rejected the chance to return to the professional ranks.

The team received several threats from the National League ranging from being thrown out of the competition, to fines, to point deductions for the upcoming 2007 season. In the end the side received a points deduction penalty, to be split into ten point deductions in the first and second stages of the 2007 season.

Following the case involving Goyang, teams in the National League signed agreements indicating whether or not they would seek promotion to the K-League if they win the National League in 2007. Ulsan Mipo Dockyard, who won the championship in 2007, also rejected the chance to move up to the K-League despite previously indicating they would seek promotion.

In light of the issues surrounding the conditional promotion place in 2006 and 2007, the National League decided to end the system prior to the 2008 season. 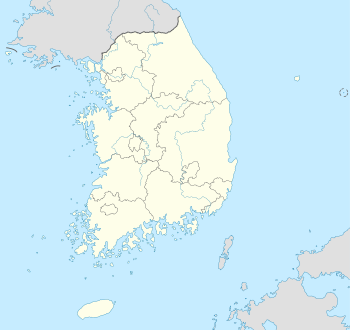 The following 14 clubs will compete in the Korea National League during the 2011 season.

There have been a total of 16 member clubs since the league was founded as the K2 League in 2003. Seoul City replaced Hallelujah for the second stage of the 2003 season after protests by radical Wonbuddhists forced the Christian club out of Iksan. Hallelujah returned to the league in 2004 after moving to Gimpo. Sangmu B withdrew their team from the league at the end of 2005 in order for the team, essentially the reserve side of K-League team Gwangju Sangmu Phoenix, to compete in the K-League reserve league. From 2010 season, Nowon Hummel FC moved to Chungju city in Chungbuk province & the name changed to Chungju Hummel FC.

Teams are listed with present-day names in the case of sides that have changed names or locations previously: