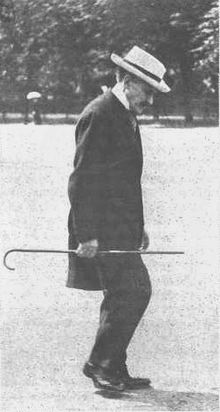 Karl Max, Prince Lichnowsky (German: Karl Max Fürst von Lichnowsky) (8 March 1860 – 27 February 1928) was a German diplomat, the author of a noted pamphlet of 1916 that deplored German diplomacy in mid-1914 that, he argued, directly caused the outbreak of the First World War.

He was born in Kreuzenort, Upper Silesia, now Krzyżanowice, Silesian Voivodeship in Poland. He was the 6th Prince and 8th Count Lichnowsky. He succeeded his father in 1901. His father was a general of cavalry, and his mother a Princess of Croy. He was the head of an old noble Bohemian family and of immense wealth, possessing estates at Kuchelna in Silesia and Gratz in Austria. As an hereditary member of the upper house of the Prussian Diet, Lichnowsky played some part in domestic politics, adopting in general a moderate attitude and deprecating party legislation. Though a Roman Catholic, he avoided identifying himself with the clerical party in Germany.[1]

Entering the diplomatic service, Lichnowsky was appointed an attaché at the London embassy in 1885 and later served as legation secretary at Bucharest.[1] He became German Ambassador to Austria-Hungary in 1902, replacing Philipp, Prince of Eulenburg-Hertefeld, but was forced into retirement in 1904, accused of too much independence from the Foreign Office after several conflicts with Friedrich von Holstein, senior political division. In 1904, he also married Countess Mechthilde von und zu Arco-Zinneberg.[1]

He spent eight years in retirement, as his memoirs note, “on my farm and in my garden, on horseback and in the fields, but I read industriously and published occasional political articles.” For several years, newspaper rumor in Germany had connected the name of Prince Lichnowsky with practically every important diplomatic post vacant from time to time, and even with the Imperial chancellorship. No official appointment was forthcoming, however, beyond the designation of privy councillor (German: Wirklicher Geheimrat) in 1911.[1]

Then Lichnowsky served as Imperial German Ambassador to the Court of St. James's from 1912-14. According to his memoirs, he was brought out of retirement in 1912 when the preferred candidate for ambassador to London was thought to be too young, and two alternate candidates turned the job down.

During the July crisis of 1914, Lichnowsky was the only German diplomat who raised objections to Germany's efforts to provoke an Austro-Serbian war, arguing that Britain would intervene in a continental war. On July 25, he implored the German government to accept an offer of British mediation in the Austro-Serbian dispute. On July 27, he followed with a cable arguing that Germany could not win a continental war. This cable was not shown to Kaiser Wilhelm II. A cable on July 28 relayed an offer from King George V to hold a conference of European ambassadors to avoid general war. A final cable on July 29 to the German Foreign Office stated simply "if war breaks out it will be the greatest catastrophe the world has ever seen." These warnings went unheeded, and by the time the final cable reached Berlin, Austrian troops were already bombing Belgrade.

On Britain's declaration of war on 4 August 1914, Lichnowsky returned to Germany. So highly was he thought of that a military guard of honour saluted his departure; a rare privilege in the circumstances.

His privately printed pamphlet, My Mission to London 1912-1914 circulated in German upper-class circles in 1916, accused his government of failing to support him in efforts to avert World War I; its 1917 publication in the United States led to his expulsion from the Prussian House of Lords. In 1918 the renamed "Lichnowsky Memorandum" was published in The Disclosures from Germany (New York: American Association for International Conciliation, 1918). It was also published in the Swedish journal Politiken in March 1918, from which a British copy was published by Cassel & Co. later in 1918 with a preface by Professor Gilbert Murray.

The pamphlet mainly covers the period 1912-14, and occasionally back to 1900. Lichnowsky deplored the German alliance with Austria-Hungary (though he owned land in Austria and had served as a diplomat in Vienna), feeling that it inevitably pulled German diplomacy into Balkan crises and tensions with Russia, without any compensating benefits to Germany with its new industries, trade and colonies. "This is a return to the days of the Holy Roman Empire and the mistakes of the Hohenstaufens and Habsburgs."[2]

The Kaiser had commented on 31 July 1914 about an encircling British diplomacy during the crisis: "For I no longer have any doubt that England, Russia and France have agreed among themselves—knowing that our treaty obligations compel us to support Austria-Hungary—to use the Austro-Serb conflict as a pretext for waging a war of annihilation against us. ... Our dilemma over keeping faith with the old and honorable Emperor has been exploited to create a situation which gives England the excuse she has been seeking to annihilate us with a spurious appearance of justice on the pretext that she is helping France and maintaining the well-known Balance of Power in Europe, i.e. playing off all European States for her own benefit against us."

In contrast, Lichnowsky outlined how the British foreign minister Sir Edward Grey had helped with two treaties on dividing the Portuguese Empire and establishing the Berlin-Bagdad railway, and had supported Germany's policy in the resolution of the Balkan Wars in 1912 and 1913 that excluded Russia. Britain had held back from declaring war until 4 August, after Belgium was invaded, yet in a telegram sent to him from Berlin on 1 August: "... England was already mentioned as an opponent..."[3]

Lichnowsky summed up his view on blame for the outbreak of war, and the failure of diplomacy, in 3 main points:[4]

"In view of the above undeniable facts it is no wonder that the whole of the civilised world outside Germany places the entire responsibility for the world-war upon our shoulders."

At the pamphlet's end he forecasts that the Central Powers must lose World War I and he gives his world-view for Germany, Britain and the USA: The world will belong to the Anglo-Saxons, Russians and Japanese, and the German will remain alone with Austria and Hungary. His [i.e. the German] rule will be that of thought and commerce, not that of the bureaucrat and soldier. He made his appearance too late, and his last chance of making good the past, that of founding a Colonial Empire, was annihilated by the world-war.[5]

The pamphlet became a formative and primary source in the minds of all the allied politicians who arranged the Versailles Peace Conference in 1919.

In his column in the May 11, 1918, issue of Illustrated London News G. K. Chesterton would note:

And, what is worse, the spirit of this cheerless impudence has sometimes spread and chilled the blood of better men. I have noticed it lately in the last stiff pose of people who still try the stale game of blaming everybody for the war, long after the Lichnowsky revelations and the peace imposed on Russia have quite finally fixed the blame.

The latter refers to the harsh terms the Germans imposed on Russia in the Treaty of Brest-Litovsk in early March 1918. Chesterton was reminding his readers that, were Germany to win the war in the west, it would impose equally harsh terms on Belgium and France, in line with the 1914 Septemberprogramm.

Professor Murray summarised his 1918 foreword to the pamphlet with:

The cleaner our national conscience the keener surely will be our will to victory. the slower we were to give up the traditions of generosity and trustfulness that came from our long security, the firmer will be our resolution to hold out...

Lichnowsky was seen as a 'Good German' who had truthfully warned his government but had been ignored at the crucial moment.

Lichnowsky's viewpoint was largely followed by the controversial historian Fritz Fischer in his 1961 book Germany's Aims in the First World War.

Regarding personal names: Fürst is a title, translated as (Sovereign) Prince, not a first or middle name. The female form is Fürstin.