Daphnis and Chloe
This article is about the original story. For the ballet by Fokine and Ravel, see Daphnis et Chloé. 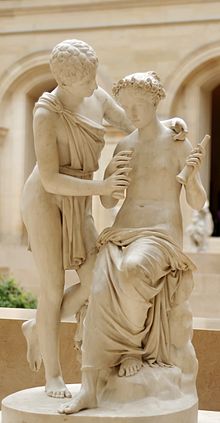 Daphnis and Chloe by Jean-Pierre Cortot

Daphnis and Chloe is the story of a boy (Daphnis) and a girl (Chloe), each of whom is exposed at birth along with some identifying tokens. A goatherd named Lamon discovers Daphnis, and a shepherd called Dryas finds Chloe. Each decides to raise the child he finds as his own. Daphnis and Chloe grow up together, herding the flocks for their foster parents. They fall in love but, being naive, do not understand what is happening to them. Philetas, a wise old cowherd, explains to them what love is and tells them that the only cure is "kissing."[2] They do this. Eventually, Lycaenion, a woman from the city, educates Daphnis in love-making. Daphnis, however, decides not to test his newly acquired skill on Chloe, because Lycaenion tells Daphnis that Chloe "will scream and cry and lie bleeding heavily [as if murdered]."[2] Throughout the book, Chloe is courted by suitors, two of whom (Dorcon and Lampis) attempt with varying degrees of success to abduct her. She is also carried off by raiders from a nearby city and saved by the intervention of the god Pan. Meanwhile, Daphnis falls into a pit, gets beaten up, is abducted by pirates, and is very nearly raped. In the end, Daphnis and Chloe are recognized by their birth parents, get married, and live out their lives in the country.[2][3]

The characters in the novel include:

Until the beginning of the 19th century, about a page of text was missing; when Paul Louis Courier went to Italy, he found the missing part in one of the plutoni of the Biblioteca Laurenziana in Florence. Unfortunately, as soon as he had copied the text, he upset the ink-stand and poured ink all over the page. The Italian philologists were incensed, especially those who had studied the plutone giving "a most exact description" (un'esattissima notizia) of it.

Jacques Amyot's French translation is perhaps better known than the original. The story has been presented in numerous illustrated editions, including a 1937 limited edition with woodcuts by Aristide Maillol, and a 1977 edition illustrated by Marc Chagall. Another translation that rivals the original is that of Annibale Caro, one of those writers dearest to lovers of the Tuscan elegances.

The 1952 work Shiosai (The Sound of the Waves), written by the well-known Japanese writer Yukio Mishima following a visit to Greece, is considered to have been inspired by the Daphnis and Chloe myth. Another work based on it is the 1923 novel Le Blé en herbe by Colette [5].

The 1987 film The Princess Bride contains similarities to Daphnis and Chloe (for example, in both stories the male romantic lead is captured by pirates). Lawrence Rinder, director of the Berkeley Art Museum and Pacific Film Archive, attributes the inspiration for the film to Longus.[6]

The work was adapted into a 64-minute mute film by Orestis Laskos in 1931, one of the first Greek cinema classics. The movie was originally considered as shocking due to the nudity in some of the scenes

The work was adapted into a 45-minute radio play by Hattie Naylor, first broadcast at 14:15 on Friday 3 March 2006. This broadcast was repeated as the Afternoon Play 14:15 on Wednesday 27 June 2007 and made available for streaming download for 7 days on the BBC Radio Four Afternoon Play webpage.

It was played for comedy, with the sexual encounters preceded by 'I must speak in Latin!' and each dream-sleep preceded by a sudden comic thud. The cast were:

Editions of the Greek text

Synopses, Analyses, and Other Studies