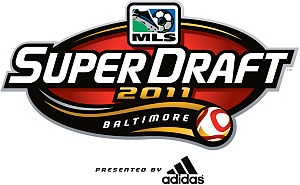 The MLS SuperDraft is an annual event, taking place in January of each year, in which the Major League Soccer teams select players who have graduated from college or otherwise been signed by the league. The SuperDraft was first instituted in 2000, as a combination of the MLS College Draft, in which players having graduated from college were selected, and the MLS Supplemental Draft, in which all other players were chosen. The draft is divided into three rounds in which each club has a selection, the order of which is determined by a combination of the teams' playoff and regular season positions, with the last placed team (or expansion teams) getting the first pick.

The MLS SuperDraft was created by merging the original Supplemental Draft with the now-defunct College Draft. Originally created to ensue strict parity in the league, the draft was designed to merit weaker clubs for their shortcomings. The first draft was held in 2000, and since then has become the flagship draft of the league. Recently, the draft has been considered to be secondary to youth academies.[1][2][3]