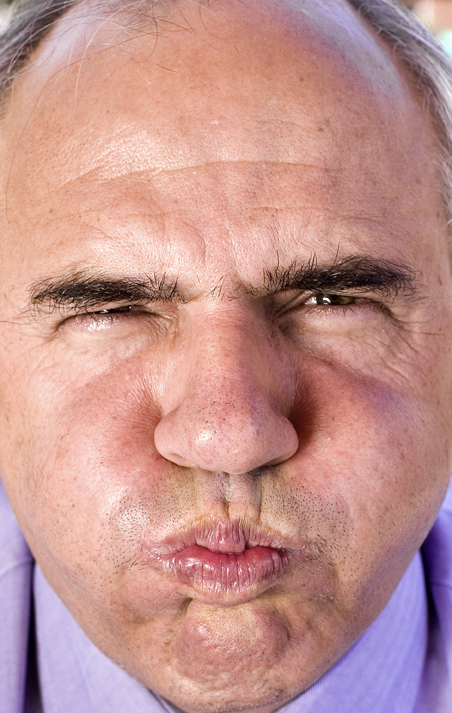 Ernesto Samper Pizano also known as "El elefante" (born , in ) is a n politician. He served as the President of Colombia from to , , representing the Liberal Party. He was involved in the so called 8000 process scandal, which takes its name from the folio number assigned to it by the chief prosecutor's office, which claims that money from the was funeled into his presidential campaign in order to guarantee his success in what would have been a very close race to the finish after failing to win by a majority during the first round (Colombia has 2 rounds of elections, unless the first round yields a winner taking more than 50-percent the votes). Samper studied in the school and the . Additionally, he conducted graduate studies in Economics at while living in New York City.

In 1993, when the campaign for the presidency was in its early stages, it became increasingly clear that the race was going to be a close call, particularly between Samper and , the candidate of the : opinion polls were sharply divided. Elections for president took place on . Ernesto Samper was elected president by a very narrow margin. [ [http://pdba.georgetown.edu/Elecdata/Col/pres94_1.html Colombia:1994 Elecciones Presidenciales, Primera Vuelta, Resultados Nacionales ] ]

Shortly after his presidential victory, Samper was accused by his opponent and future successor, Andrés Pastrana, of having received campaign donations from the in excess of $6 million US dollars. Samper initially denied the allegations and deemed his political adversary as a sore loser, but soon afterwards a series of tape recordings were released to the public, the so called narco-cassettes. [ [http://www.semana.com/wf_InfoArticulo.aspx?IdArt=54965 Articulo Archivado YO ACUSO ] ] The Chief Prosecutor at the time, , personally led the investigation. Valdivieso was cousin of the late , a charismatic Liberal party presidential candidate assassinated by the in for his political views, particularly for favoring the extradition of mafiosos to the . Soon, the investigations led by Valdivieso unveiled a clear connection between the Cali drug cartel and top figures of Colombia's society, including politicians, journalists, athletes, army and police officers, and artists, among others.

Fernando Botero, who had been one of the campaign managers for Samper, was named Minister of Defense. , another of Samper's political allies during campaigning, was named Minister of Interior. When news of the investigation were leaked to the press, both of these figures were personally appointed by Samper to face the media and aggressively disregard any notion of drug money entering the finances of the presidential campaign. The message was clear: if money from the Cali drug cartel found its way to the campaign's finances, Samper had no notion of this. During a in which both men were discussing and disregarding key elements of the investigation, one of the journalists pointed out to them as to how they had obtained such document, for it was in essence a confidential document that only the prosecutor had the authority to release once the evidence was collected. Hesitant and nervous, Serpa alleged that it was given to them by an "anonymous source".

Eventually, after many months a great number of politicians and top members of the government were indicted, only scape goats were convicted. Botero was arrested in connection to the investigation and charges were brought up against him for conspiracy to illicitly gain wealth. Santiago Medina, the campaign's treasurer at the time was also arrested and sentenced to in connection with the investigation. Other political figures such as Alberto Santofimio Botero, Eduardo Mestre, journalist Alberto "el loco" Giraldo, were also imprisoned under the same investigation. Giraldo was the person speaking on behalf of the Cali cartel in many of the recordings (narco-cassettes). Charges were also brought against Samper who by the time still insisted on his innocence and claimed that if money had entered the presidential campaign, it had done so "behind his back".

, a within Colombia's Catholic Church, expressed in an interview to several media that not knowing that drug money financed part of the presidential campaign was similar to not noticing an elephant entering one's living room. [ [http://www.canalrcn.com/noticias/index.php?op=info&idC=28266&idP=119&idS=742 Canal RCN - Noticias RCN ] ] [ [http://www.semana.com/wf_InfoArticulo.aspx?IdArt=30217 Articulo Archivado FRASES DEL AÃ‘O ] ] Ever since then, the events that led to drug money financing "Samper for President" campaign have been referred to as "The Elephant".

As outlined by the Colombian Constitution, only Congress can serve as the President's natural judge. So, once the Prosecutor General presented the case and delivered the evidence to the Congress, it was in the hands of the latter to evaluate the evidence and determine if Samper was also directly involved in this scandal. Congress is a political institution and at the time the majority of its members were political allies of Samper, many of whom had also been implicated in dealings with the . It was no surprise that despite the evidence against Samper the case was precluded, that is neither guilty or innocent.

As a consequence of this political turmoil, the U.S. government withdrew any political assistance to Samper's government. For consecutive years, Samper's administration was lambasted by the US for its supposed failure to make every effort to effectively fight the war against cocaine and the Cali Cartel. Additionally, the US revoked Samper's visa and thereby effectively banned him from entering the country.

For a detailed timeline of the events regarding this investigation, see .

In , President offered Samper Colombia's ambassadorship to France. This led to the resignation of former President and Colombian ambassador to the U.S., , who criticized the decision. Opposition was also expressed by the media, political groups and other parts of Colombian society. In the end, Samper did not accept the offer.