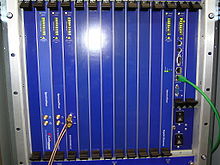 A cable modem termination system or CMTS is a piece of equipment typically located in a cable company's headend or hubsite, and used to provide high speed data services, such as cable Internet or voice over Internet Protocol, to cable subscribers. A CMTS provides many of the same functions provided by the DSLAM in a DSL system.

In order to provide these high speed data services, a cable company will connect its headend to the Internet via very high capacity data links to a network service provider. On the subscriber side of the headend, the CMTS enables the communication with subscribers' cable modems. Different CMTSs are capable of serving different cable modem population sizes—ranging from 4,000 cable modems to 150,000 or more, depending in part on traffic. A given headend may have between 1-12 CMTSs to service the cable modem population served by that headend or HFC hub.

One way to think of a CMTS is to imagine a router with Ethernet interfaces (connections) on one side and coax RF interfaces on the other side. The RF/coax interfaces carry RF signals to and from the subscriber's cable modem.

CMTSs typically carry only IP traffic. Traffic destined for the cable modem from the Internet, known as downstream traffic, is carried in IP packets encapsulated in MPEG transport stream packets. These MPEG packets are carried on data streams that are typically modulated onto a TV channel using either 64-QAM or 256-QAM versions of quadrature amplitude modulation.

Upstream data (data from cable modems to the headend or Internet) is carried in Ethernet frames encapsulated inside DOCSIS frames modulated with QPSK, 16-QAM, 32-QAM, 64-QAM or 128-QAM using TDMA, ATDMA or S-CDMA frequency sharing mechanisms. This is done at the "subband" or "return" portion of the cable TV spectrum (also known as the "T" channels), a much lower part of the frequency spectrum than the downstream signal usually 5-42Mhz in DOCSIS 2.0.

A typical CMTS allows a subscriber's computer to obtain an IP address by forwarding DHCP requests to the relevant servers. This DHCP server returns, for the most part, what looks like a typical response including an assigned IP address for the computer, gateway/router addresses to use, DNS servers, etc.

The CMTS may also implement some basic filtering to protect against unauthorized users and various attacks. Traffic shaping is sometimes performed to prioritize application traffic, perhaps based upon subscribed plan or download usage and also to provide guaranteed Quality of service (QOS) for the cable operator's own PacketCable-based VOIP service. However, the function of traffic shaping is more likely done by a policy traffic switch. A CMTS may also act as a bridge or router.

A customer's cable modem cannot communicate directly with other modems on the line. In general, cable modem traffic is routed to other cable modems or to the Internet through a series of CMTSs and traditional routers. However, a route could conceivably pass through a single CMTS.