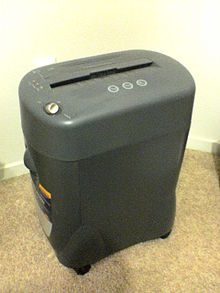 A paper shredder is a mechanical device used to cut paper into chad, typically either strips or fine particles. Government organizations, businesses, and private individuals use shredders to destroy private, confidential, or otherwise sensitive documents. Privacy experts often recommend that individuals shred bills, tax documents, credit card and bank account statements, and other items which could be used by thieves to commit fraud or identity theft.

The first paper shredder is credited to prolific inventor Abbot Augustus Low of Horseshoe, located on the Western shore of Horseshoe Lake, in Piercefield, New York.[1] His patent for a "waste paper receptacle" to offer an improved method of disposing of waste paper was filed on February 2, 1909 and received the U.S. patent number 929,960 on August 31, 1909. Low’s invention was never manufactured, however.

Adolf Ehinger's paper shredder, based on a hand-crank pasta maker, was manufactured in 1935 in Germany. Supposedly he needed to shred his anti-Nazi propaganda to avoid the inquiries of the authorities. Ehinger later marketed his shredders to government agencies and financial institutions converting from hand-crank to electric motor. Ehinger's company, EBA Maschinenfabrik, manufactured the first cross-cut paper shredders in 1959 and continues to do so to this day as EBA Krug & Priester GmbH & Co. in Balingen.

The U.S. embassy in Iran used strip-cut paper shredders to reduce paper pages to strips before the embassy was taken over in 1979 (though not entirely successfully). After Colonel Oliver North told Congress that he used a Schleicher Intimus 007 S cross-cut model to shred Iran-Contra documents, sales for that company increased nearly 20 percent in 1987.[2]

Until the mid-1980s, it was rare for paper shredders to be used by non-government entities. After the 1984 Supreme Court decision in California v. Greenwood, in which the Supreme Court of the United States held that the Fourth Amendment does not prohibit the warrantless search and seizure of garbage left for collection outside of a home, paper shredders became more popular among US citizens with privacy concerns. Anti-burning laws, concern over landfills, industrial espionage, and identity theft concerns created greater demand for paper shredding.

The US Federal Trade Commission estimates that 9 million cases of identity theft take place per year in the USA alone[3] and recommends that individuals defend themselves against identity theft by shredding financial documents before disposal.[4]

News agencies have driven awareness of information theft to the extent that most consumers, healthcare organizations and businesses understand the importance of destroying confidential information. Also, information privacy laws like FACTA, HIPAA and the Gramm-Leach-Bliley Act are driving shredder sales as businesses and individuals take steps to comply to avoid legal complications.

The normal small shredder is an electrically powered device, but there are unpowered ones such as special scissors with multiple blade pair and shredders which are hand-cranked.

These machines are classified according to the size and shape of the shreds they produce. (As a practical matter, this is also a measure of the degree of randomness or entropy they generate.) Shredders can range in size from standard scissors and other hand-operated devices all the way up to truck-sized shredders. There are also shredder selector sites that can help consumers choose a shredder that is appropriate for their needs. 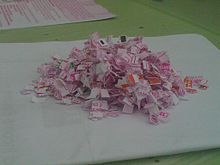 The shredded remains of a National Lottery play slip.

There are numerous standards for the security levels of paper shredders, including:

Historically, the General Services Administration (GSA) set paper shredder guidance in the Interim Federal Specification FF-S-001169 dated July 1971 which was superseded by standard A-A-2599 for classified material which was canceled in February 2000. GSA has not published a new standard since.

There are alternative shredders that use combustion, chemical decomposition, or composting for disposing of the shreds.

A mobile shredding truck is a box truck with an industrial sized paper shredder mounted inside the box, typically in the front section of the box, closest to the cab. The box is divided into two sections: the shredding equipment area, and the payload area for storage of the shredded materials. These trucks have been designed to shred up to 8,000 lb (3,600 kg) of paper an hour. Mobile shredding trucks can have a shredded material storage capacity of 6,000 to 15,000 lb (2,700 to 6,800 kg) of shredded paper. Office paper is the typical material being shredded, but with increasing security concerns customers also request shredding of CDs, DVDs, hard drives, credit cards, and uniforms, among other things. There are many manufactures for mobile shredding trucks but only a few of them design equipment in house.

Some companies outsource their shredding to shredding services. These companies either shred on-site, with mobile shredder trucks or have off-site shredding facilities. Documents that need to be destroyed are often placed in bins that are emptied periodically.

In Canada, there are no provincial or federal regulations for the operations of the industry. Companies can voluntarily join an international association called NAID where they get bi-yearly announced and unannounced audits.

As the demand for commercial and personal shredders grows, shredder manufacturers continue to develop new features that improve the shredder user's experience with efficiency, convenience and safety.

Shredding at high levels continues in government agencies too. According to the report of the Paul Volcker Committee, between April and December 2004, Kofi Annan’s then Chef de Cabinet Iqbal Riza authorized thousands of UN documents shredded including the entire chronological files of the Oil-for-Food Programme between the years 1997-1999.[7]

The Union Bank of Switzerland used paper shredders to destroy evidence that their company owned property stolen from Jews during the Holocaust by the Nazi government. The shredding was uncovered to the public by the work of Christoph Meili, a security guard working at the bank who happened to wander by a room where the shredding was taking place. Also in the shredding room were books from the German Reichsbank. [8] They listed stock accounts for companies involved in the holocaust, including BASF, Degussa, and Degesch.[9] They also listed real-estate records for Berlin property that had been forcibly taken by the Nazis, placed in Swiss accounts, and then claimed to be owned by UBS.[10] Destruction of such documents was a violation of Swiss laws.[11] 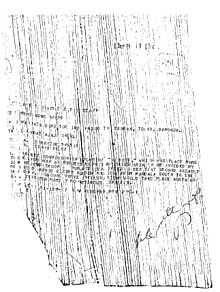 An example of shredded & reassemble degrees during Iran hostage crisis

In some cases it is technically possible to reassemble the pieces of shredded documents; the feasibility of such a project is a cost-to-benefit calculation. If the chad is not further randomized, the strips that belonged to the same document tend to come out of the shredder close to each other and remain roughly in that configuration. Furthermore, when the documents are fed to the shredder in a way that the lines of text are not perpendicular to the shredder blades, portions of text may remain legible on the strips.

If the shredder doesn't cut paper small enough, confidential documents could be removed from the trash, reassembled and read. This can lead to corporate espionage as dumpster diving is the easiest way for professional thieves to steal sensitive information from businesses. For this reason, several new shredders provide protection from information theft by cutting paper into pieces significantly smaller than the length of a staple.

After the Iranian Revolution and the takeover of the U.S. embassy in Tehran in 1979, Iranians enlisted local carpet weavers who reconstructed the pieces by hand. The recovered documents would be later released by the Iranian regime in a series of books called "Documents from the US espionage Den".[12] The US government subsequently improved its shredding techniques by adding pulverizing, pulping, and chemical decomposition protocols.

Modern computer technology considerably speeds up the process of reassembling shredded documents. The strips are scanned on both sides, and then the computer determines how the strips should be put together. Robert Johnson of the National Association for Information Destruction;[13] has stated that there is a huge demand for document reconstruction. Several companies offer commercial document reconstruction services. For maximum security, documents should be shredded so that the words of the document go through the shredder horizontally (i.e. perpendicular to the blades). Many of the documents in the Enron Accounting scandals were fed through the shredder the wrong way, making them easier to reassemble. There is currently an effort underway to recover the shredded archives of the Stasi, the East German secret police.[14] There are "millions of shreds of paper that panicked Stasi officials threw into garbage bags during the regime's final days in the fall of 1989". As it took three dozen people six years to reconstruct 300 of the 16,000 bags, the Fraunhofer-IPK institute has developed the "Stasi-Schnipselmaschine" (Stasi snippet machine) for computerized reconstruction and is testing it in a pilot project.

DARPA’s Shredder Challenge calls upon computer scientists, puzzle enthusiasts and anyone else who likes solving complex problems to compete for up to $50,000 by piecing together a series of shredded documents. The Shredder Challenge consists of five separate puzzles in which the number of documents, the document subject matter and the method of shredding will be varied to present challenges of increasing difficulty. To complete each problem, participants must provide the answer to a puzzle embedded in the content of the reconstructed document. The overall prizewinner and prize awarded will depend on the number and difficulty of the problems solved. DARPA will release the challenge problems on October 27, 2011 at 12:00 PM Eastern and announce a winner the week of December 5, 2011 once final results are calculated.[15]

Document shredders display certain device-specific characteristics, "fingerprints", like the exact spacing of the blades, the degree and pattern of their wear. These can be reconstructed from the minute variations of size of the paper strips and the microscopic marks on their edges, and by comparison with the strips produced by known shredders, the individual shredder that was used to destroy a given document may be determined. Jack Brassil, a researcher for Hewlett-Packard, works on a project for making shredders more easily traceable.[16] (Cf. the forensic identification of typewriters.)

The 'cutting head' of a small shredder.

As with any motorized cutting equipment, there is a risk of injury. As shredders migrated to home environments with children and pets, shredder safety became an important issue. As early as 1985, personal injuries have occurred as a result of consumers operating shredders. As the number of paper shredders per household increased, so did the number of accidents. From January 2000 through September 2005, the Consumer Product Safety Commission (CPSC) received 50 reports of incidents involving finger amputations, lacerations, and other severe injuries from paper shredders. The majority of injuries happened to children under the age of five.

Although designed with a narrow opening to the cutting wheels, shredders still pose a danger to pets and small children. Children as young as four months of age have the ability to imitate adults. As children grow older, this tendency to mimic adult behavior increases and parents might not anticipate the dangers of children accidentally activating a shredder. This puts children at risk for serious injury, even with adult supervision. Children’s fingers can easily be pulled into the paper entry through the force of the shredding mechanism.

Many home shredders can be left in a "stand-by" mode that will start the cutting process when anything is inserted into the feed slot. In homes with small children or pets, simply keeping the shredder unplugged while not in use can also reduce any risk.[17][18]