Infobox Musical
name= 110 in the Shade 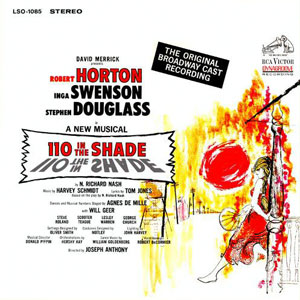 Based on Nash's 1954 play "The Rainmaker", it focuses on Lizzie Curry, a living on a in the American southwest, and her relationships with local File, a cautious who fears being hurt again, and charismatic con man Bill Starbuck, posing as a rainmaker who promises the locals he can bring relief to the drought-stricken area. Nash's book is faithful to his original play, although all the interior scenes were moved outdoors to allow for the addition of townspeople for ensemble numbers and dances. Many of Jones' lyrics come directly from Nash's play.

Following the success of "", the project was the composing team's first for Broadway. The original score was almost tic in scope, and when the show's running time in Boston proved to be too long, the creative team began trimming numbers, eventually discarding nearly as many as were heard in the finished product.

After two previews, the production, directed by and by , opened on at the , where it ran for 330 performances. The cast included Robert Horton as Starbuck, as Lizzie, and as File, with , , and in supporting roles.

nominations went to Schmidt and Jones as Best Composer and Lyricist, Swenson as Best Actress in a Musical, Geer as Best Featured Actor in a Musical, and Anthony for his direction. An original cast recording was released by .

The West End production, directed by Emile Littler, opened on at the Palace Theatre, where it ran for 101 performances.

A 1992 production, directed by and choreographed by , starred as Lizzie. The score was heard to particular advantage here, as the opera company orchestra was appreciably larger than the conventional Broadway pit orchestra. A 1997 2-CD studio recording released by Jay Records features Ziemba, , , , and Schmidt and Jones.

In 1999, a concert version was staged at the in London by Ian Marshall Fisher for the "Discovering Lost Musicals Charitable Trust", with as Lizzie. For this production only a piano accompaniment was used, and the cast was unmiked.

A Broadway revival presented by the and directed by opened on at and closed July 29, 2007, with 94 performances and 27 previews. The cast included , , and Steve Kazee. McDonald won the for Outstanding Actress in a Musical for her performance. The revival garnered five Tony Award nominations but no wins.

;Act I
*Another Hot Day
*Lizzie's Coming Home
*Love, Don't Turn Away
*Poker Polka
*The Hungry Men
*The Rain Song
*You're Not Foolin' Me
*Cinderella
*Raunchy
*A Man and a Woman
*Old Maid;Act II
*Evenin' Star (added for the 2007 revival)
*Everything Beautiful Happens at Night
*Melisande
*Simple Little Things
*Little Red Hat
*Is It Really Me?
*Wonderful Music
*The Rain Song (Reprise)

Synopsis by Tommy Krasker, of

It's the in , in the small town of Three Point, Texas, where a blistering heat wave has the local , File, and the other townsfolk forever eyeing the sky ("Another Hot Day"). Elsewhere in town, on the of H.C. Curry, the air is also charged with anticipation, due to the imminent arrival of H.C.'s daughter ("Lizzie's Coming Home"), who's been off visiting relatives in Sweetwater. The trip was designed to find Lizzie a husband, but to no avail: as at home, her intelligence, sharp wit, and insecurities proved her undoing. H.C. and his sons, Jim and Noah, hatch a plan to invite Sheriff File to the annual lunch, where Lizzie can impress him with her prettiest party dress and tastiest picnic basket. Reluctant at first, but then allowing herself to dream just a bit, Lizzie agrees ("Love Don't Turn Away").

Sheriff File, unfortunately, proves immune to every enticement the Curry boys offer ("Poker Polka"). His mind is more on "some sort of " heading into town, a fellow named Tornado Johnson; besides he knows a fix-up when he sees one, and as he puts it, "I can mend my own shirts." Jim and Noah depart, but H.C. stays behind to tell File he knows the lie he's been living: that File's not a widower, as he claims to be—that his wife ran out on him. H.C. sees a man who's lonely and shut off, one who needs "a lot more mendin' than shirts," but File grows angry and defensive, and H.C. leaves him be.

As the ladies at the picnic grounds await the arrival of "The Hungry Men", File is noticeably not among them, and although her father and brothers do their best to console her, Lizzie feels the sting of File's rejection. Jim suggests she'd have more luck if she flirted more—played down her intelligence and told men what they wanted to hear: like Lily Ann Beasley, who has all the men in town weak in the knees. But Lizzie is resolute in her vision of a husband: "I want him to stand up straight—and I want to be able to stand up straight "to" him!"

Suddenly, something sounds like a dry, rattling crack of , and with it appears a handsome stranger who introduces himself as "Starbuck—Rainmaker." His bold promises include the town into a revivalist frenzy ("The Rain Song"), and H.C. plunks down a hundred dollars for the promise of rain within twenty-four hours. But Lizzie sees through Starbuck's pretenses, and he instantly sees through hers ("You're Not Foolin' Me"). His accusations touch a nerve, and as he exits, a childhood song runs through her head ("Cinderella") that darkens her mood further. Feeling a need to "get out of me for a while," she imagines a different sort of Lizzie Curry ("Raunchy").

File appears unexpectedly at the picnic grounds and, still insistent that he has a right to be alone, nonetheless reaches out to Lizzie, coming clean about his past and, almost despite himself, revealing old wounds ("A Man and a Woman"). But as they start to open up to each other, Lizzie's candid comments—and her feeble attempts to retract them—drive File away in a fury. Her family appears instantly to grill her, and Noah lashes out at her father's efforts to console her, insisting she accept the reality that she's going to end up alone. Lizzie, with terror in her heart, faces her future ("Old Maid").

As twilight approaches, lovers still haunt the picnic grounds. Starbuck is there as well, alone and quiet, doing a bit of soul-searching ("Evenin' Star", added for the 2007 revival). The others merely admire the majesty of the sky ("Everything Beautiful Happens At Night"). For Lizzie, though, means putting an end to her daydreams. And yet, still in search of something she can't quite define, she finds herself drawn to Starbuck's camp. Sensing her discontent, he encourages her to dream again—this time far beyond her small-town horizons ("Melisande"). Instinctively defensive, as before, Lizzie counters that her dreams are just a different kind ("Simple Little Things"), but feeling that she'll never get what she wants, she breaks down. Starbuck grabs her, encouraging her to see herself through her own eyes, and not as she fears others view her; he takes the pins out of her hair and insists she recognize her own beauty. The lights fade as they begin to make love.

Back at the picnic area, Jim is boasting of his own Fourth of July adventures ("Little Red Hat") when File arrives to tell the Curry clan that he's on the lookout for Tornado Johnson—aka rainmaker Starbuck. He understands that H.C. gave him a hundred dollars for the promise of rain, but H.C., well aware that Lizzie is with Starbuck, refuses to reveal his whereabouts. Noah is shocked that his father is willing to leave Lizzie alone with a conman, but H.C. understands his daughter's needs, "even if it's only one minute—with a man talkin' quiet and his hand touchin' her face." And back at Starbuck's tent, that's precisely what's happening, as Starbuck shares a difficult : "I never made rain in my life! Not a single raindrop!" Lizzie counsels him that "it's not good to live in your dreams," but he notes that it's not good to live "outside" of them, either. She concluded that best way to live is "somewhere between the two" ("Is It Really Me?").

As the Curry family awaits Lizzie's arrival, the mood is silent and tense. But she appears joyous and transformed ("I've got a new beau!"), and when File arrives to Starbuck, the entire Curry clan defends him. Starbuck implores Lizzie to join him in his travels, and File—suddenly aware of what he needs and what he might lose—steps forward to plead his "own" case ("Wonderful Music"). Lizzie, with a new sense of her own worth, makes her decision. As Starbuck exits for parts unknown, a low rumble of thunder ushers in a sudden , less than twenty-four hours of his arrival. And as the townspeople revel at the heavy downpour ("The Rain Song reprise"), Lizzie and File rejoice in the promise of hope and renewal that that brings.