Salt of the Earth

Salt of the Earth 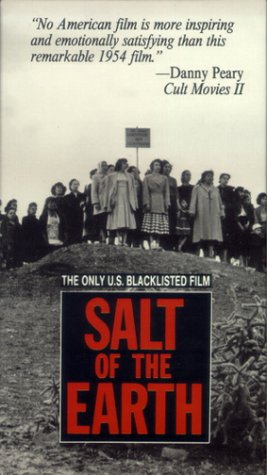 "Salt of the Earth" (1954) is an American written by Michael Wilson, directed by , and produced by . All had been blacklisted by the Hollywood establishment due to their involvement in socialist politics. [imdb title| id=0047443|title=Salt of the Earth.]

The movie became a historical phenomenon and has a cult following due to how the establishment (s, s, s, and other s) dealt with the film. "Salt of the Earth" is one of the first pictures to advance the feminist social and political point-of-view.

In 1950–1951, in the fictional village of Zinc Town, , the drama tells the story of a long and difficult strike led by and miners against the . The film shows how the miners (the union men and their wives), the company, and the police, react during the strike. In neorealist style the producers and director used actual miners and their families as actors in the film.

The film opens with a narration from Esperanza Quintero (). She begins::"How shall I begin my story that has no beginning? My name is Esperanza, Esperanza Quintero. I am a miner's wife. This is our home. The house is not ours. But the flowers... the flowers are ours. This is my village. When I was a child, it was called San Marcos. The Anglos changed the name to Zinc Town. Zinc Town, New Mexico, U.S.A. Our roots go deep in this place, deeper than the pines, deeper than the mine shaft..."

The issues the miners for include equity in wages with workers, and health and safety issues. Ramon Quintero (Juan Chacon) helps organize the strike, but at home he treats his wife as a second class citizen.

His wife, Esperanza Quintero, who is with their third child, is traditionally passive at first and is reluctant either to take part in the strike or to assert her rights for equality at home.

But she changes her attitude when the men are forced to end their picketing by a injunction. The women convince the men at the union hall, after a long debate, and proudly take their place in the picket line.

According to Linda Gross the film was called subversive and blacklisted because it was sponsored by the International Union of Mine, Mill and Smelter Workers and produced by many members of the "blacklist." Prior to making the film the union had been expelled from the CIO in 1950 for their alleged Communist-dominated leadership. [ [http://film.society.tripod.com/nzffs/bib-salt-of-the-earth.htm Gross, Linda] , "Los Angeles Times," , .]

In 1947, director Herbert Biberman became one of ten Hollywood writers and directors that was subpoenaed by the U.S. . They were "unfriendly" witnesses and, as such, were cited for when they refused to answer questions about their affiliation. Biberman and his fellow "Ten" went to jail over their contempt convictions. Biberman was imprisoned in the Federal Correctional Institution at for a period of six months. After his release he directed this film. [ [http://www.lib.berkeley.edu/MRC/blacklist.html The Hollywood Ten] . Library, . Document maintained on server by Gary Handman, Head, Media Resources Center. Last accessed: , 2007.]

The producers used only five cast members who were professional actors. The rest were locals from , or members of the International Union of Mine, Mill and Smelter Workers, Local 890 (many of whom were part of an actual strike that inspired the story). Juan Chacón, for example, was a real-life Union Local president. In the film he plays the main protagonist who has trouble dealing with women as equals. [ [http://www.vafilm.com/1995/thursday.html University of Virginia] . "A Nation of Immigrants," , .]

Other participants who made the film and been blacklisted by the Hollywood studios include: Paul Jarrico, Will Geer, Rosaura Revueltas, and Michael Wilson.

The film was denounced by the for its supposed Communist sympathies, and the investigated the film's financing. The called for a nation-wide of the film. Also, film-processing labs were told not to work on "Salt of the Earth" and unionized projectionists were instructed not to show it.

After its opening night in , the film languished for ten years because all but twelve theaters in the country refused to screen it. [ [http://culturevulture.net/Books/Suppression.htm Wake, Bob] . "Culture Vulture," book review of James J. Lorence's "The Suppression of Salt of the Earth."]

Lee Hockstader writing for "" wrote: "During the course of production in in 1953, the trade press denounced it as a subversive plot, anti-Communist vigilantes fired rifle shots at the set, the film's leading lady [Rosaura Revueltas] was deported to , and from time to time a small buzzed noisily overhead....The film, edited in secret, was stored for safekeeping in an anonymous wooden shack in Los Angeles." [ [http://www.socialistviewpoint.org/apr_03/apr_03_37.html Hockstader, Lee] . "The Washington Post," "Blacklisted Film Restored and Rehabilitated," , , archived at the Socialist Viewpoint web site.]

The story of the film's suppression, as well as the events it depicted, inspired an underground audience of unionists, leftists, , , and film historians.

The film found a new life in the 1960s and gradually reached wider audiences through union halls, women's centers, and film schools. The 50th anniversary of the film saw a number of commemorative conferences held across the . [ [http://www.pww.org/article/articleview/3503/1/164 Pecinovsky, Tony] , "People's Weekly World Newspaper," , .]

The "Salt of the Earth Labor College" located in , is named after the film. The pro-labor institution (not a college, "per se") holds various lectures and forums related to unionism and economic justice. The film is screened on a frequent basis. [ [http://www.saltearthlaborcollege.org/ Salt of the Earth] Labor College web site.]

Around 1993, linguistics professor and political commentator praised the film because of the way people were portrayed doing the real work of unions. He said, " [T] he real work is being done by people who are not known, that's always been true in every popular movement in history...I don't know how you get that across in a film. Actually, come to think of it, there are some films that have done it. I mean, I don't see a lot of visual stuff, so I'm not the best commentator, but I thought "Salt of the Earth" really did it. It was a long time ago, but at the time I thought that it was one of the really great movies -- and of course it was killed, I think it was almost never shown." [ [http://www.chomsky.info/books/power02.htm Noam Chomsky] interview with political activists, excerpted from "Understanding Power", The New Press, 2002.]

Due to the nature of the film and being in full force, the Hollywood establishment did not embrace the film. "" charged at the time that it was made "under direct orders of the ." [IMDb, ibid.] Its harshest detractor was , who reviewed the film for "" in 1954 and labeled it "as clear a piece of Communist propaganda as we have had in many years." ["Culture Vulture," ibid.]

However, "New York Times" film critic, was not deterred by the political climate of the time and reviewed the picture favorably, both the screenplay and the direction, writing, "In the light of this agitated history, it is somewhat surprising to find that "Salt of the Earth" is, in substance, simply a strong pro-labor film with a particularly sympathetic interest in the Mexican-Americans with whom it deals...But the real dramatic crux of the picture is the stern and bitter conflict within the membership of the union. It is the issue of whether the women shall have equality of expression and of strike participation with the men. And it is along this line of contention that Michael Wilson's tautly muscled script develops considerable personal drama, raw emotion and power." Crowther ends his review by calling the film "a calculated social document." [ [http://movies2.nytimes.com/mem/movies/review.html?title1=Salt%20of%20the%20Earth&title2=&reviewer=BOSLEY%20CROWTHER&pdate=19540315&v_id=42666 Crowther, Bosley] . "The New York Times", film review, "Salt of the Earth" Opens at the Grande -- Filming Marked by Violence," , .]

The review aggregator reported that 100% of critics gave the film a "Fresh" rating, based on 12 reviews. [ [http://www.rottentomatoes.com/m/salt_of_the_earth/ "Salt of the Earth"] at . Last accessed: , .]

On , , a digitally restored print of the film was released in by Geneon (Pioneer), and packaged with the documentary "," which reported on the ten filmmakers who refused to cooperate with the (HUAC), resulting in their being .

A version has also been released by the .

Public domain
Because the film's copyright was not renewed in 1982 the film is now in the public domain and can be downloaded to a for free. [ [http://www.archive.org/details/salt_of_the_earth Internet Archive] . Download of film possible for free.]

Other distinguishments
* In 1992 the film was selected for preservation by the United States at the because it was deemed "culturally significant."
* The film is preserved by the in New York.

The film has been adapted into a two-act named "Esperanza" (Hope). The labor movement in linked forces with opera professor Karlos Moser and commissioned the production of the new musical celebrating labor. The music was written by David Bishop and the by Carlos Morton. The opera premiered in , on , to positive reviews. [ [http://wisconsinlaborhistory.org/musical.html Wisconsin Labor History Society] web site.]

A , based on the making of the film, was chronicled in "" (2000). It was produced and directed by and released in , in and an countries. It has not been released, neither a limited or wide basis, in the . The film has been shown at many film festivals around the world.