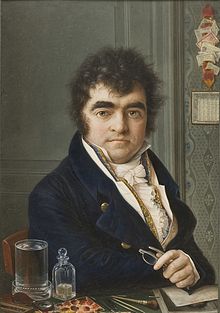 A portrait miniature is a miniature portrait painting, usually executed in gouache, watercolour, or enamel.

Portrait miniatures began to flourish in 16th century Europe and the art was practiced during the 17th century and 18th century. They were especially valuable in introducing people to each other over distances; a nobleman proposing the marriage of his daughter might send a courier with her portrait to visit potential suitors. Soldiers and sailors might carry miniatures of their loved ones while traveling, or a wife might keep one of her husband while he was away.

The first miniaturists used watercolour to paint on stretched vellum. During the second half of the 17th century, vitreous enamel painted on copper became increasingly popular. In the 18th century, miniatures were painted with watercolour on ivory. As small in size as 40 mm × 30 mm, portrait miniatures were often used as personal mementos or as jewellry or snuff box covers.

From the mid-19th century, the development of daguerreotypes and photography contributed to the decline in popularity of the miniatures. 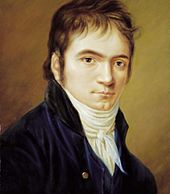 In Denmark, Cornelius Høyer specialized in miniature painting in the second half of the 18th century and was appointed Miniature Painter to the Danish Court in 1769. He also worked at several other European courts and won a considerable international reputation.[1] He was succeeded by Christian Horneman as Denmark's premier proponent of the special trade of miniature portraits. Among his most known works are a portrait of Ludwig van Beethoven from 1802 of which Beethoven was particularly fond—possibly because it presents him to a more handsome appearance than most other portraits.[2] 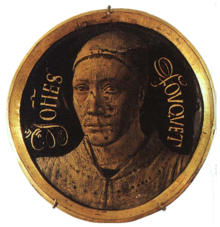 The portrait miniature developed from the illuminated manuscript, which had been superseded for the purposes of book illustration by techniques such as woodprints and calc printing. The earliest portrait miniaturists were famous manuscript painters like Jean Fouquet (self-portrait of 1450), and Simon Bening, whose daughter Levina Teerlinc mostly painted portrait miniatures, and moved to England, where her predecessor as court artist, Hans Holbein the Younger painted some miniatures. Lucas Horenbout was another Netherlandish miniature painter at the court of Henry VIII. France also had a strong tradition of miniatures, centred on the court.

The first famous native English portrait miniaturist is Nicholas Hilliard (c. 1537–1619), whose work was conservative in style but very sensitive to the character of the sitter; his best works are beautifully executed. The colours are opaque, and gold is used to heighten the effect, while the paintings are on card. They are often signed, and have frequently also a Latin motto upon them. Hilliard worked for a while in France, and he is probably identical with the painter alluded to in 1577 as Nicholas Belliart. Hilliard was succeeded by his son Lawrence Hilliard (died 1640); his technique was similar to that of his father, but bolder, and his miniatures richer in colour.

Isaac Oliver and his son Peter Oliver (painter) succeeded Hilliard. Isaac (c. 1560–1617) was the pupil of Hilliard. Peter (1594–1647) was the pupil of Isaac. The two men were the earliest to give roundness and form to the faces they painted. They signed their best works in monogram, and painted not only very small miniatures, but larger ones measuring as much as 10 in × 9 in (250 mm × 230 mm). They copied for Charles I of England on a small scale many of his famous pictures by the old masters.

Other miniaturists at about the same date included Balthazar Gerbier, George Jamesone, Penelope Cleyn and her brothers. John Hoskins (died 1664) was followed by a son of the same name, who was known to have been living in 1700, since a miniature signed by him and bearing that date is in the Pierpont Morgan collection, representing James FitzJames, 1st Duke of Berwick.

Samuel Cooper (1609–1672) was a nephew and student of the elder Hoskins, and is considered the greatest English portrait miniaturist. He spent much of his time in Paris and Holland, and very little is known of his career. His work has a superb breadth and dignity, and has been well called life-size work in little. His portraits of the men of the Puritan epoch are remarkable for their truth to life and strength of handling. He painted upon card, chicken skin and vellum, and on two occasions upon thin pieces of mutton bone. The use of ivory was not introduced until long after his time. His work is frequently signed with his initials, generally in gold, and very often with the addition of the date. 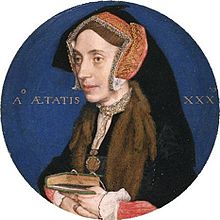 Other miniaturists of this period include Alexander Cooper (died 1660), who painted a series of portraits of the children of the king and queen of Bohemia; David des Granges (1611–1675); Richard Gibson (1615–1690); Susannah-Penelope Rosse, his daughter, who imitated the work of Samuel Cooper, and Charles Beale and Mary Beale. They are followed by such artists as Lawrence Crosse (died 1724), Gervase Spencer (died 1763), Bernard Lens III, Nathaniel Hone and Jeremiah Meyer, the latter two notable in connection with the foundation of the Royal Academy. The workers in black lead (plumbago, as it was called at that time) must not be overlooked, especially David Loggan, William Faithorne, White, Thomas Forster and John Faber Senior. They drew with exquisite detail and great effect on paper or vellum. 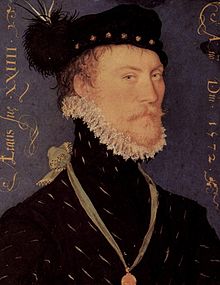 Miniature portrait of an unidentified man, by Nicholas Hilliard, 1572.

On 28 April 1733,[4] there was a terrible destruction of portrait miniatures in a fire at White's Chocolate and Coffe House. Sir Andrew Fountaine rented two rooms at White's to temporarily hold his huge collection of portraits done by Hilliard, the Olivers, Samuel Cooper, and others. The entire house burned down; the number of paintings destroyed was so large that the ashes were carefully sifted to recover the gold from the incinerated mountings of the miniatures.[5]

The 18th century produced a great number of miniature painters, of whom Richard Cosway (1742–1821) is the most famous. His works are of great beauty, and executed with a dash and brilliance which no other artist equalled. His best work was done about 1799. His portraits are generally on ivory, although occasionally he worked on paper or vellum, and he produced a great many full-length pencil drawings on paper, in which he slightly tinted the faces and hands, and these he called "stayned drawings". Cosway's finest miniatures are signed on the back; there is but one genuine signed on the face; very few bear even his initials on the front.

George Engleheart (1750–1829) painted 4,900 miniatures, and his work is stronger and more impressive than that of Cosway; it is often signed E or G.E. Andrew Plimer (1763–1837) was a pupil of Cosway, and both he and his brother Nathaniel Plimer produced some lovely portraits. The brightness of the eyes, wiriness of the hair, exuberance of colour, combined with forced chiaroscuro and often very inaccurate drawing, are characteristics of Andrew Plimer's work. John Smart (c1740–1811) was in some respects the greatest of the 18th century miniaturists. His work excelled in refinement, power and delicacy; its silky texture and elaborate finish, and the artists love for a brown background, distinguish it. Other notable painters were Richard Crosse (1742–1810), Ozias Humphry (1742–1810), Samuel Shelley (c1750–1808), whose best pictures are groups of two or more persons, William Wood, a Suffolk artist (1768–1808), Henry Edridge (1769–1821), John Bogle, and Edward Dayes.

In the 19th century John Cox Dillman Engleheart (1784–1862), nephew of George; Andrew Robertson (1777–1845), George Beaumont, William Behnes, Thomas Frank Heaphy and Anne Mee must be mentioned; William Corden the Elder (1795–1867) is also popular with collectors. Sir Thomas Lawrence painted a few miniatures, and Henry Raeburn some in his early days; but the art maybe said to have died out with Sir William Ross, although some works by Sir Edwin Henry Landseer in this form are in existence, some small paintings of flowers by George Lance, and one portrait by Dante Gabriel Rossetti. Towards the end of the 19th century came a revival of miniature painting, but without producing any masters of the same calibre. Alyn Williams amongst Englishmen, Johann Waldemar von Rehling-Quistgaard, the talented Danish miniature painter, and Bess Norris, an Australian artist, deserve mention.

Although the popularity of small portraiture began to decline in the 20th century, some artists continued to accept commissions, among them Eda Nemoede Casterton, who was selected to show her work in the prestigious Paris Salon. Nemoede Casterton used thin sheets of ivory rather than canvas for her paintings, a common practice among miniature portraitists.

The earliest French miniature painters were Jean Clouet (died c. 1540), his son François Clouet, Jean Fouquet, Jean Perreal and others; but of their work in portraiture we have little trace at the present day, although there are many portraits and a vast number of drawings attributed to them with more or less reason. The seven portraits in the manuscript of the Gallic War Bibliothque Nationale are assigned to the eider Clouet; and to them may be added a fine work, in the Pierpont Morgan collection, representing the Marschal de Brissac. Following these men we find Renard de Saint-André (1613–1677), and Jean Cotelle; the fine draughtsmen Etienne Picart; and then, later on, we know of miniatures by Nicolas de Largillière, François Boucher, Jean-Marc Nattier, and Jean-Germain Drouais; but the greatest names are those of Peter Adolph Hall of Sweden, François Dumont of France, and Friedrich-Heinrich Füger of Austria. The tiny pictures painted by the van Blarenberghe family are by many persons grouped as miniatures, and some of the later French artists, as Pierre-Paul Prud'hon and Constance Meyer, executed miniature portraits, while others whose names might be mentioned were Joseph Werner (1637–1710), Rosalba Carriera (1675–1757), Pasquier, Carlo Marsigli, Garriot, Sicardi and Festa.

The most popular artists in France, however, were Jean-Baptiste Jacques Augustin [1759–1832) and Jean-Baptiste Isabey [1767–1855). Their portraits of Napoleon and his court are exceedingly fine, and perhaps no other Frenchman painted miniatures so well as did Augustin.

The Spanish painter Francisco Goya is known to have executed a few miniatures.

The English style of portrait miniatures was also exported to the American colonies; among the earliest recorded American miniaturists is Mary Roberts (died 1761), the first American woman to work in the form. Miniaturist Amalia Küssner Coudert (1863–1932), from Terre Haute, Indiana, was known for her portraits of New York socialites and European royalty in the last decade of the 19th century. Recipients of her watercolor on ivory portraits included Caroline Astor,[6] King Edward VII, Czar Nicholas II of Russia and Cecil Rhodes.[7] 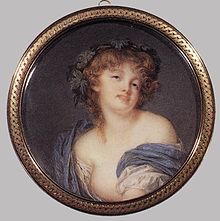 Miniatures are painted in oil, watercolour and enamel, but chiefly in watercolour. Many Dutch and German miniatures were painted in oil, and as a rule these are on copper; and there are portraits in the same medium, and often on the same material, attributed to many of the great Italian artists, notably those of the Bologna school. Samuel Cooper is said to have executed a few paintings in oil on copper.

From about 1650 onwards many fine miniatures were executed in vitreous enamel. Jean Petitot 1607–1691 was the greatest worker in this material, and painted his finest portraits in Paris for Louis XIV of France. His son succeeded him in the same profession. Other artists in enamel were Christian Friedrich Zincke died 1767, Heinrich Hurter [1734–1799), David Liot, Paul Prieur, and Johann Melchior Dinglinger. Many of these artists were either Frenchmen or Swiss, but most of them visited England and worked there for a while. The greatest English enamel portrait painter was Henry Bone [1755–1839). A great collection of his small enamel reproductions of celebrated paintings is in Buckingham Palace.

During the 18th century, watercolour on ivory became the standard medium. The use of ivory was first adopted in around 1700, during the latter part of the reign of William III; miniatures prior to that time having been painted on vellum, chicken-skin or cardboard, a few on the backs of playing cards, and many more on very thin vellum closely mounted on to playing cards.