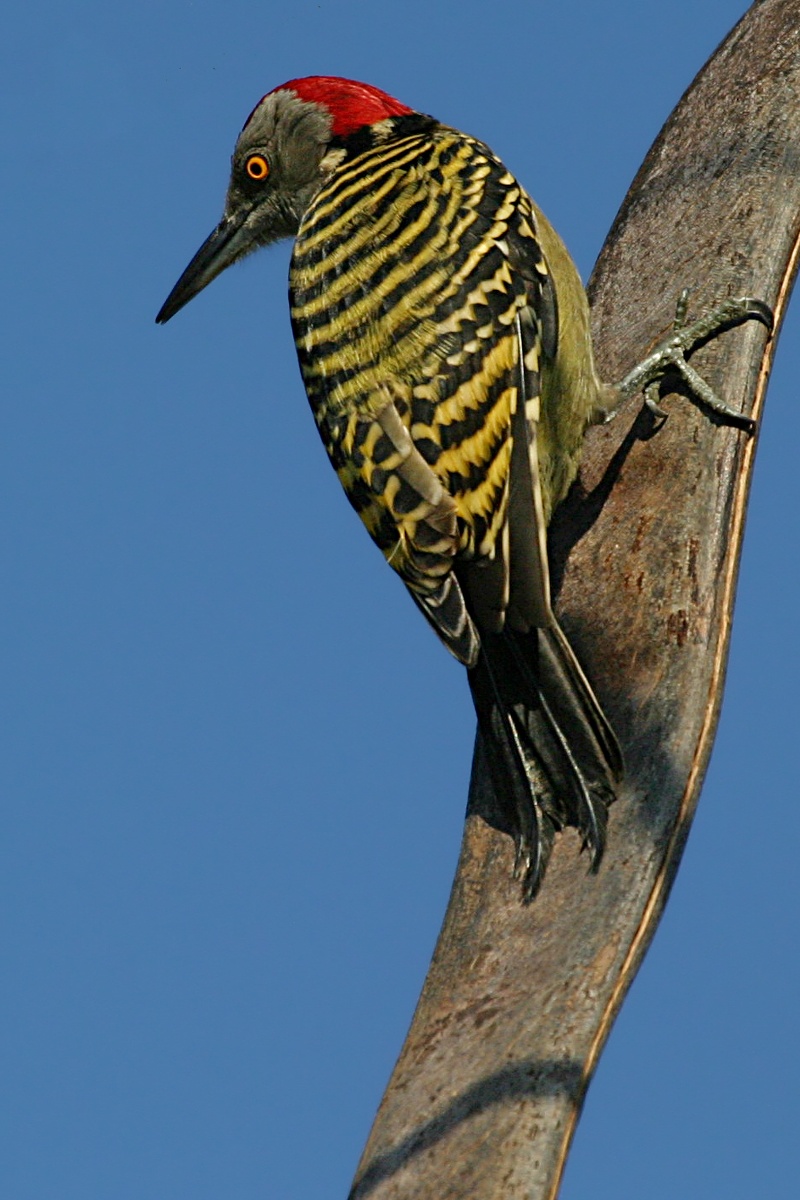 Woodpeckers are s of the order . They are one subfamily in the family , which also includes the and . They are found worldwide and include about 180 species.

Woodpeckers gained their English name because of the habit of some species of tapping and pecking noisily on trunks with their beaks and heads. This is both a means of communication to signal possession of territory to their rivals, and a method of locating and accessing insect larvae found under the bark or in long winding tunnels in the tree or upright log.

Some woodpeckers and s in the order Piciformes have zygodactyl feet, with two toes pointing forward, and two backward. These feet, though adapted for clinging to a vertical surface, can be used for grasping or perching. Several species have only three toes. The woodpecker's long , in many cases as long as the woodpecker itself, can be darted forward to capture insects. The tongue is not attached to the woodpecker's head in the same way as it is in most birds, but instead it curls back up around its skull, which allows it to be so long.

Woodpeckers also use their beaks to create larger holes for their nests which are 15&ndash;45 cm (6&ndash;18 inches) below the opening. These nests are lined only with wood chips and hold 2&ndash;8 white eggs laid by the females. Because the nests are out of sight, they are not visible to predators and eggs do not need to be camouflaged. Cavities created by woodpeckers are also reused as nests by other birds, such as s, s, some s and s, and mammals, such as s.

Several adaptations combine to protect the woodpecker's brain from the substantial pounding that the pecking behaviour causes: it has a relatively thick skull with relatively spongy bone to cushion the brain; there is very little in its small ; the bird contracts muscles just before impact, thus transmitting the impact past the brain and allowing its whole body to help absorb the shock; its relatively small brain is less prone to concussion than other animals'. [Cure for a headache, Ivan R. Schwab, British Journal of Ophthalmology. 86(8):843, August 2002.]

Some species have modified joints between bones in the skull and upper jaw, as well as muscles which contract to absorb the shock of the hammering. Strong neck and tail-feather muscles, and a chisel-like bill are other hammering adaptations which are seen in most species. Other species of woodpecker, such as the Flicker, uses its long tongue primarily to grab prey from the ground or from under loose bark. It has few shock-absorbing adaptations, and prefers to feed on the ground or to chip away at rotting wood and bark, habits observed in birds outside of the woodpecker family. A "continuum" in skull structures, from little- to highly-specialized for pounding is seen in different genera (groups of related species) of woodpeckers alive today. In his classic "Birds of America," describes the slight gradations in horn length found in different species of living woodpeckers. The slack of tongue is kept under the loose skin behind its neck. The tiny bones divide into essentially two tongues, coming back together before entering the beak.

The systematics of woodpeckers is quite convoluted. Based on an assumption of unrealistically low in details of plumage and behavior, 5 subfamilies were distinguished. However, it has turned out that similar plumage patterns and modes of life are not reliable to determine higher phylogenetic relationships in woodpeckers, and thus only 3 subfamilies should be accepted.

For example, the genera "" ( and ) and "" (Americas) of large woodpeckers were believed to form a distinct group. However, they are quite unrelated and instead close to a n genus, "" and "", respectively. In addition, the allocation of many species, e.g. the , has turned out to be in error, and some taxa with unclear relationships could be placed into the phylogeny [ [http://www.sciencedirect.com/science?_ob=ArticleURL&_udi=B6WNH-4JT9CNS-1&_user=10&_rdoc=1&_fmt=&_orig=search&_sort=d&view=c&_acct=C000050221&_version=1&_urlVersion=0&_userid=10&md5=c50f1d58b2ae51eeff9c004c0e216215 Evolutionary history of woodpeckers and allies (Aves: Picidae): Placing key taxa on the phylogenetic tree, Molecular Phylogenetics and Evolution, Brett W. Benz, Mark B. Robbins and A. Townsend Peterson] Volume 40, Issue 2, August 2006, Pages 389-399 ] [ [http://www.blackwell-synergy.com/doi/abs/10.1111/j.1095-8312.2006.00586.x Mitochondrial DNA phylogeny of the woodpecker genus Veniliornis (Picidae, Picinae) and related genera implies convergent evolution of plumage patterns, Biological Journal of the Linnean Society, William S. Moore, Amy C. Weibel and Andrea Aguis] Volume 87 Issue 4 Page 611-624, April 2006] .

This is a list of woodpecker species, presented in .

* [http://ibc.hbw.com/ibc/phtml/familia.phtml?idFamilia=103 Woodpecker videos] on the Internet Bird Collection
* [http://www.talkorigins.org/faqs/woodpecker/woodpecker.html Anatomy and Evolution of the Woodpecker's Tongue]