Man Bites Dog (French: C'est arrivé près de chez vous, It Happened in Your Neighborhood) is a darkly comedic crime Belgian mockumentary starring Benoît Poelvoorde. In the film, a crew of filmmakers follow a serial killer, recording his crimes for a documentary they are producing. At first dispassionate observers, they find themselves caught up in the increasingly chaotic violence.

Ben is a charismatic serial killer who discusses at length whatever comes to mind, be it architecture, philosophy or classical music.

A film crew made up of three men join Ben on his sadistic adventures, recording them as a fly on the wall documentary. Ben takes them to meet his family and friends, while explaining at length the "craft" of his work.

He then ventures into apartment buildings explaining how it is more cost-effective to attack old people than young couples because the former have more cash at home and are easier to kill. In a following scene, he screams wildly ("I'm going to kill you") at an elderly lady, causing her to have a heart attack. As she lies dying, he casually remarks that this method allowed him to spare a bullet. Ben continues with his candid explanations and his murders, targeting anyone who comes his way: women, children, immigrants and postmen (his favourite victims).

The camera crew begin to get more and more involved in the murders, first as mere accomplices but eventually taking an active part in them. During filming, two of them are shot, their deaths later called "occupational hazards" by the crew. The camera crew finally crosses the line into active participation when Ben takes a couple hostage in their own home. He holds the man at gunpoint and encourages the camera crew to participate in raping the woman. The following morning, the camera dispassionately records the aftermath: both the man and the woman are dead.

Ben's violence becomes more and more random and motiveless, until he shoots an acquaintance in front of his girlfriend and family during a family meal, shocking his loved ones but also intimidating them into keeping silent. Events slip out of Ben's (and the camera crew's) control when the relatives of one of his victims start taking revenge on him and his family. Ben discovers that his parents have been killed, along with his girlfriend: a flautist, she has been murdered in a particularly humiliating manner, with her flute inserted into her anus. He at last decides that he must go on the run. He meets the camera crew for an emotional farewell, but in the middle of reciting a poem he is abruptly shot dead by an off-camera gunman. The camera crew is then picked off, one by one. After the cameraman has dropped the camera onto the ground, it keeps running and the film ends with the discarded camera recording the death of the fleeing sound recordist.

The film is shot in black and white and was produced on a shoe-string budget by four student filmmakers, led by director Rémy Belvaux. The film's writers, Belvaux, Poelvoorde and Bonzel, all appear in the film using their own first names: Poelvoorde as Ben, the killer; Belvaux as Rémy, the director; and Bonzel as André, the camera operator. The genesis of the idea came from shooting a documentary without any money. This film is rated NC-17 by the Motion Picture Association of America for "strong graphic violence".[1] 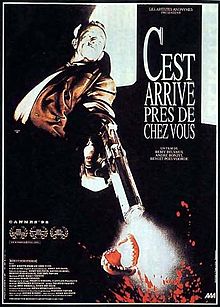 Although it is never shown or suggested in the film itself that Benoit kills a baby, the original poster features an image of a baby's pacifier with spattering blood coming from an unseen target at the end of Benoit's gun. For foreign release posters (not including the Region 4/Australian release), the baby's pacifier was changed to a set of dentures.