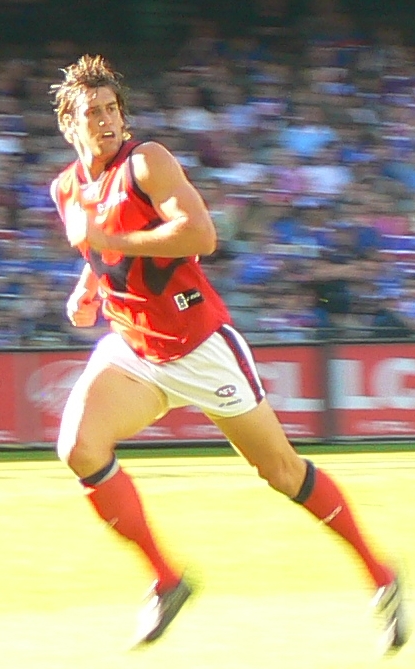 Jeff White (born 19 February 1977) is an er who had a distinguished career in the AFL spanning 14 years. He played most recently and notably for the , following a move from the Fremantle Dockers at the end of 1997.

White grew up in Victoria and was keen to return to after he was drafted to the Fremantle Dockers in . He is married to Stacy, and they live together in Sandringham. The pair met on the Gold Coast, and married there in October 2005.

White was drafted by the Fremantle Dockers as the number 1 pick, which Fremantle were granted by the AFL because 1995 was the club's first season in the competition. White made his debut in Round 3 of Fremantle's inaugral season in a victory over Fitzroy. [The Complete AFL Drafts [http://users.comcen.com.au/~weaver/draft94.html 1994-95 AFL Draft] , "1994 National Draft", 12 August 2008.] He played six matches in 1995, kicking three goals but averaging less than three hit-outs per game. The 1996 season saw him play 13 matches and kick 13 goals and greatly improve his average number of disposals. He was nominated for the in Round 19 in a 24-point win against Collingwood. He had 22 disposals, 11 marks, kicked a goal and received three votes for his stand-out performance for the season.

White was handed the number 34 guernsey at Fremantle and he wore the number for the rest of his career. He credits Percy Johnson with guiding his ruck style in his time with Fremantle.

Melbourne traded their two highest selections in the 1997 draft (picks 2 and 18) to Fremantle in return for White. [AFL Insider [http://www.aflinsider.net/one-pick-from-a-premiership-fremantle-dockers/ One Pick From A Premiership: Fremantle Dockers] , "AFL Insider", 3 November 2006.] He was a key signing in Melbourne's attempt to rebuild its squad, and in his first season at Melbourne he shared the rucking duties with Jim Stynes, the latter mentoring White in their only season together.

White played all but one of Melbourne's matches in 2001, and after a commanding performance against his former club in Round 21 where had 33 possessions, kicked two goals, and received three Brownlow Medal votes,

The following season saw a vast improvement in White's personal performance, as he enjoyed the finest season of his career, winning Melbourne's best-and-fairest, receiving All-Australian selection, and ranking second in the league for total number of hit-outs. He reached the top ten in the 2004 Brownlow Medal with 15 votes, including four best-on-ground displays, [ [http://stats.rleague.com/afl/brownlow/brownlow2004.html AFL Tables - 2004 Brownlow Medal] , "http://stats.rleague.com/", 2 September 2008.] with dominant performances against North Melbourne and Fremantle among them. His most productive period came between Rounds 9 and 16, where he recorded his four best-on-ground displays, averaged 25 hit-outs and received 13 Brownlow Medal votes.

He was named as one of Melbourne's "150 Legends" during the club's 150th anniversary celebrations, and finished his career with the seventh-highest number of appearances for Melbourne with 236. He was made a life member of the Melbourne Football Club during 2008. White was delisted from Melbourne following the 2008 season, but has stated that he hopes to play on for one or two more seasons at another AFL club: "From a personal point of view, I still feel like I've got some time left." His preference would have been to continue at Melbourne, saying, "I love the club and would love to play on" but that he "totally understands" his delisting.

Carlton coach has suggested that he will "have to go back and have a look" at the possibility of drafting White for the 2009 season. Ratten cited White's experience and leadership in helping to guide the younger ruckmen at Carlton as a potential draw-card.

During 1998—his first year living back in —he was selected to play for Victoria.

White's kicking accuracy was of particular note for a ruckman—his goal-kicking accuracy finished at slightly less than 60%. He was a consistent exponent of the , preferring to take chest marks high over packs. He was nominated on several occasions for the , but he never won the award. [DropPunt.com [http://droppunt.com/moty/2002winner.htm AFL Mark of the Year 2002] , "DropPunt.com", accessed 12 September 2008.] [DropPunt.com [http://droppunt.com/moty/2004winner.htm 2004 AFL Mark of the Year] , "DropPunt.com", accessed 12 September 2008.] His ball-skills and work around the ground remained one of his greatest strengths throughout his career. He effected 5000 hit-outs in his AFL career, with a career-high game total of 47 during a round-22 win over in 2000.

Throughout the latter stages of his career, he wore special thigh- and shin-pads to protect himself from injury in the ruck—his specially-designed shin-pad was required to protect a problematic shin injury which had threatened his career. [Main, J. "Aussie Rules: For Dummies" (2nd edition, 2008) p 69.] During a match in 2003, he was kicked in the shin, causing his shin-pad to crack and split the skin, leaving a laceration about the size of a . Once the wound had healed, White's surgeon told him that if it split open again, he would have to stop playing. White has said that this "reality check" helped to strengthen his focus and helped him deal with injuries more effectively. He said that the specially-designed shin-guard and those who designed it "saved his career". (The shin-guard can be seen on White's right-leg in the photos on this page.)

In 2005, he was involved in a horrific on-field incident with Geelong's Steven King. As King attempted to kick the ball out of mid-air, he missed and collected White's face at the height of his leg's swing, causing facial injuries that required extensive surgery, inserting five metal plates and 14 screws into his jaw and face. It was viewed as an accident by the AFL tribunal and no action was taken against King. As the incident took place in Melbourne's final match of the season—Geelong winning the match and knocking Melbourne out of the finals—White was able to recover during the off-season and did not miss a match, despite the severity of the injury. White's wedding to his fiancée Stacy was postponed until later in the year due to the injury.