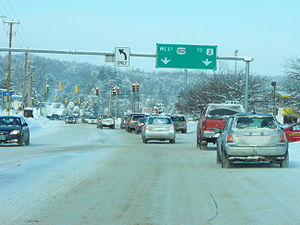 US 302 is known as the Roosevelt Trail through southern Maine because it was the beginning of the Theodore Roosevelt International Highway to Portland, Oregon.[2][3] The highway leaves Portland, Maine, bridging the Presumpscot River into Westbrook at Riverton. The Roosevelt Trail then bridges the Pleasant River at milepost 13.4 in Windham, the Crooked River in Casco near a boyhood home of Nathaniel Hawthorne, Long Lake near milepost 31 in Naples, Moose Pond near milepost 46 in Bridgton, and the Saco River near milepost 56 in Fryeburg. The highway follows the Saco River from Fryeburg into the White Mountains and enters New Hampshire near milepost 58.[4] It is a two-lane highway for almost all of its length, but there are multi-lane sections within the Portland area, as well as short four-lane sections in and around North Windham (especially the commercial areas). Some of the hilly sections also feature a third passing lane.

U.S. Route 302 enters New Hampshire following the Saco River through Crawford Notch in the White Mountains. The highway follows the Ammonoosuc River out of the mountains and bridges the Connecticut River into Wells River, Vermont. 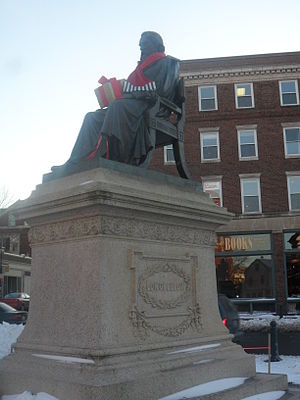 The southern end of US 302 follows city streets from Longfellow Square in the 17th century colonial seaport of Portland, Maine. The highway follows a 19th century stagecoach road from Portland through Windham to Bridgton. The portion from Windham to Bridgton was built about 1785. Stagecoach service began in 1803, and the route became a post road for the United States Postal Service in 1814. Transportation over this route was augmented by the Cumberland and Oxford Canal from 1832 to 1932, and by the Bridgton and Saco River Railroad from 1883 to 1941.[5] The highway through Crawford Notch follows the Tenth New Hampshire Turnpike built in 1803 and parallels the Maine Central Railroad Mountain Division built in 1877. The highway eliminated railway passenger travel over the route from Portland by 1958 and railroad freight service through Crawford Notch was discontinued in 1983.[6]

From 1922 until 1935, much of what is now US 302 was a part of the New England Interstate road system, designated as New England Interstate Route 18 (NE-18) from Portland, Maine, northwest to Littleton, New Hampshire (roughly 112 miles). From Littleton west to Montpelier in Vermont, US 302 and NE-18 took different paths. NE-18 took a more northerly route, along present-day New Hampshire Route 18 and Vermont Route 18 to St. Johnsbury, Vermont (closely paralleling I-93), then along present-day US 2 up to Montpelier.

Current US 302 runs along a more southerly route using other former sections of New England Interstate Routes. From Littleton, it went along former NE-10 to Woodsville, New Hampshire, then along former NE-25 to Montpelier.