Alaska (born Olvido Gara Jova, June 13, 1963 in Mexico City) is a Spanish - Mexican singer, dj, and TV personality famous in Spain and Latin America. She was of the main characters in the so called Movida the cultural movement following the Franco dictatorship in Spain. This movement in which music, arts, cinema and fashion erupted and collided to confirm the actual society Spain had become under Franco. She has participated since the last part of the seventies in several groups of different success: Kaka de Luxe 1977, Alaska y los Pegamoides 1980, Alaska y Dinarama 1983 and since 1989 the duet Fangoria (band). She is also one of Mexico's and Spain's main gay icons.

Her father was a Spaniard exiled during the Spanish Civil War and her mother a Cuban exiled by Castro.

Some years before Francisco Franco died, her parents decided to move back to Spain.

Alaska was a big fan of Lou Reed, T-Rex, etc., but David Bowie was her biggest influence. She even told her mother that she would love to be a boy just to be gay. The birth of punk also had a big influence on the young Alaska, who soon decided to form a band. She went to El Rastro (Madrid flea market) looking for band members, where she met Nacho Canut and Carlos Berlanga.

In 1977, she, along with Fernando Márquez, Nacho Canut, Carlos Berlanga and Enrique Sierra, among others, formed the band Kaka de Luxe, one of the first Spanish punk rock bands. Alaska played the bass guitar. In 1979 Gara, Canut, Berlanga, Ana Curra and Eduardo Benavente formed the band Alaska y los Pegamoides. Alaska was lead singer for the first time with Pegamoides. They took the name as a tribute to one of the bands they admired: Siouxsie and the Banshees. Due to some artistic differences, Carlos Berlanga left Pegamoides and with Nacho Canut they formed Dinarama. At this time Eduardo Benavente and Ana Curra were very involved in Parálisis Permanente, one of the first gothic bands in Spain. A few months after Carlos Berlanga left the band, Pegamoides split up. In 1982, Alaska joined Dinarama and the band released their first album in 1983 Canciones Profanas under the name of Dinarama + Alaska. The band took the name of Alaska y Dinarama with their following album Deseo carnal and they kept this name until 1989 when Carlos Berlanga left Dinarama, in the middle of their tour for the last album Fan Fatal where all songs are tribute to the bands they admired and loved: Ramones, Siouxsie and the Banshees, Michael Jackson, Depeche Mode, Aviador Dro, Parálisis Permanente, etc. As Dinarama they have released some of the finest songs of Spanish pop music, and without any doubt Dinarama has been one of the most influential bands in the history of Spanish music. Once Dinarama splits up, Nacho Canut and Alaska adopt the name of Fangoria. They changed their style of music to electronic pop, in the style of Pet Shop Boys. They released their first album Salto Mortal with Hispavox, their record company since Pegamoides. After that they left the company and released a trilogy with different independent companies: Un día cualquiera en Vulcano I, Un día cualquiera en Vulcano II and Un día cualquiera en Vulcano III. They did not play many concerts despite the fact that some said their music is fantastic. It was in this period that Alaska became an icon for the LGBT community and became very active supporting Madrid Gay Pride. 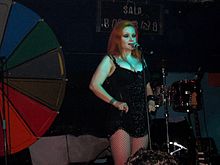 In the Madrid night.

In the last part of the 1980s, Alaska was the host of the hip children's TV show La Bola de Cristal.

In 2006, British artist Jack Lucien revealed on his MySpace that he would be sampling Alaska's A quién le importa on a new album.[1] Although it did not end up on the album, the song leaked in June 2008.[2] This isn't the first time A quién le importa has received attention in modern popular culture.

For discography, see the Fangoria page.

She has collaborated on such soundtracks as The Killer Tongue (La Lengua Asesina) with Robert Englund, The Bear Cub (Cachorro), Bandid Lover (Amante Bandido) in Miguel Bosé's Papito (2007), etc.

In 2006, Fangoria visited México to promote their new album El Extraño Viaje. Alaska appeared on two sketches of Telehit's Desde Gayola (a Mexican parody show), the first one she apperared as herself in an interview with Tesorito, the second one playing the character of Galaxia (a DJ) with Supermana, Chef Ornica & Manigüis. Clips of her appearance are very popular on YouTube.

U.S. intellectual Camille Paglia, upon being alerted to Fangoria's music video "El Cementerio De Mis Sueños" ("the cemetery of my dreams") by a reader of her column on www.salon.com, had the following to say about Alaska in her column dated January 10, 2008[3]: