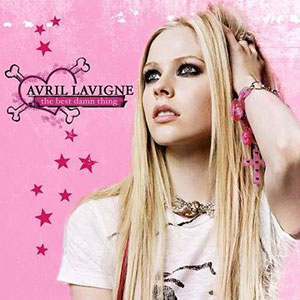 The album's first single was the number-one hit "Girlfriend", the second "When You're Gone", and the third "Hot". "The Best Damn Thing" is the fourth and final single on this album. The track "" is also featured on the "Eragon" soundtrack. According to the , globally "The Best Damn Thing" was the fourth biggest selling album and 's biggest selling album of 2007.

The standard version of the album, released on April 14, has all the profanities censored. This applies to the songs: "Girlfriend", "I Can Do Better", "Everything Back but You" and "I Don't Have to Try". In "I Can Do Better", all uses of the word "" are replaced with a "shhuuh!" sound, but the line "You're so full of shit" is changed to "You're so full of it", and in "Everything Back but You" the words "bitch" and "slut" (in the chorus line "..., , psycho babe, I hate you...") are replaced with "hey", similar to those in "Girlfriend". Also, the lyric "Get ready, " is replaced with double "get ready" in "I Don't Have to Try". The term "" is used in the track "Girlfriend". In some radio edits of the song, this is changed to "one and only". The word "" is unedited on the song "Runaway". Only the Deluxe and Limited Edition versions contain the unedited, explicit versions of the songs. This version of the album bears the label because of the instances of profanity. It was Lavigne's first album in the United States to bear the label; in some markets the label was used on her second album, "" (2004). [ [http://www.avrillavigne.com/ Avril lavigne.com] ] Because of this, and because the album title contains the word "damn", some children's radio stations (e.g. ) that previously played Lavigne's music are not playing her new singles.

In an interview on , Lavigne stated that, after numerous photo shoots, she could not choose a suitable image for the album's cover. Lavigne's husband, , took the photo which appears on the cover on the side of the road in a suburb of Los Angeles, which was taken in a "spur of the moment" decision by the couple.

The first single, "Girlfriend", was to be released on January 29, but the date was changed because of the then-increasing popularity of "" on the radio.Fact|date=May 2007 The single premiered on radio station HOT 89.9 on February 6, and the video debuted on February 26. Evan, her former guitarist, said in his that he makes a cameo in the "Girlfriend" video. "Girlfriend" is available in seven other languages, the only difference from the English version being the chorus translated into Spanish, Portuguese, Mandarin, Japanese, Italian, German and French.

Lavigne has been doing a small tour to promote "The Best Damn Thing". Only members of her fan club were allowed to attend the shows. She kicked off the small tour in , , and played for a crowd of around 200. The Calgary show aired on television on April 2, 2007, on the CBC Network. On this show, one could see behind-the-scenes footage and Lavigne performing songs from "The Best Damn Thing", as well as other shows in Los Angeles, Paris and . She also held autograph signings in New York City and Hollywood after the album was released.

On February 18, 2007, clips of "Everything Back But You", "I Can Do Better" and "When You're Gone" were released on AOL Music. [ [http://music.aol.com/franchise/firstlisten/avril-lavigne-new-songs Avril Lavigne Full CD Listening Party - AOL Music ] ] The track "Alone" (the B-side of "Girlfriend") was made available for download on the in and Australia on March 29. On April 4, 2007, the album was leaked onto the internet and was made available to download on many file sharing sites. The whole album made its radio debut on radio station HOT 89.9 at 6:00 pm on April 14, 2007.

On September 11, 2007, Lavigne appeared on the season finale of 2007 and performed "Hot" and "When You're Gone". She received standing ovations from the audience after both these performances. On the show, Lavigne stated that she will be on tour in North America (Canada first) in March/April 2008. She will be playing in three continents and will be in Europe for the first time since the launch of her album "The Best Damn Thing. Avril is quoted as saying that she is really looking forward to the European leg of her tour, particularly Britain. Avril says "There is something really special for all Canadians about returning to the mother country. It reminds us of who we actually are."citequote

In a June 2007 interview with the magazine "Performing Songwriter", , who collaborated with Lavigne on the album "", stated that Lavigne "doesn't really sit and write [songs] by herself or anything", and that because she " [will] cross the ethical line" without complaint from others, Kreviazuk refused to work with her again. She said she sent Lavigne a song she had written titled "Contagious" in 2005, and that she noticed the track listing of "The Best Damn Thing" features a song called "Contagious" on which Kreviazuk is not credited. "What do you do with that?", she said. [ [http://www.performingsongwriter.com/vault/tech/features/keyboard_102.pdf Chantal Kreviazuk in "Performer Songwriter"] ] On July 10, 2007, Kreviazuk retracted the statements she made in the aforementioned interview. [ [http://www.billboard.com/bbcom/news/article_display.jsp?vnu_content_id=1003609349 "Billboard"] ] On the website of The Black List Club, said that he and Lavigne had co-written "Contagious" for him to record, but that it sounded better when recorded by Lavigne. [ [http://www.blacklistclub.com/html/news.php The Black List Club official site] ]

On July 2, 2007, songwriters for the U.S. band filed a lawsuit against Lavigne, her publishing company and , stating that the song "Girlfriend" was very similar to The Rubinoos' 1970s single "I Wanna Be Your Boyfriend". [ [http://www.cbc.ca/arts/music/story/2007/07/04/lavigne-lawsuit-girfriend.html CBC.ca] ] On July 6, Lavigne denied The Rubinoos' and Kreviazuk's accusations in an open letter on her website, writing that she had "never heard the [Rubinoos] song in [her] life" and that she was considering taking legal action against Kreviazuk with regards to her allegations, which she considered "damaging to my reputation and a clear defamation of my character."

On July 10, the song "I Don't Have to Try" sparked further plagiarism speculation, after and "" noted similarities between it and Peaches's 2003 song "I'm the Kinda". [ [http://www.rollingstone.com/rockdaily/index.php/2007/07/10/did-avril-lavigne-bite-a-peaches-track-too/ Did Avril Lavigne Bite a Peaches Track Too?] ]

In Canada, the album debuted at number one with 68,000 copies sold, slightly more than "Under My Skin". In its second week, there was a 62% sales drop to around 26,000 copies. The album has sold 320,000+ in Canada. In Australia, "The Best Damn Thing" debuted on the ARIA Albums Chart at number two and shipped over 35,000 copies, being accredited Gold by ARIA; it was Lavigne's first album not to reach number one. It has been certified two times Platinum.

In Japan, it debuted at number two. In its second week of release, after Lavigne's "" performance, it reached the number-one spot, selling 120,000 copies. This is her second number-one album in Japan. In its chart run, it sold 850,307 copies and was the third best selling album of the year, and the only western album in the top twenty-five. It peaked on the ese Albums Chart at number-one, and it had already been certified Gold within three days when the album was available for pre-order. It went Platinum when it was released to stores. In Spain, "The Best Damn Thing" debuted at number nine, lower than "Under My Skin", which debuted at number one.

The album debuted at number one in over twenty countries.

"The Best Damn Thing" was released in a number of countries during April 2007.

The tour first goes through Canada and the USA, from May to July Lavigne is going to Europe, coming back to the USA and Canada in July-August and to Asia from August to October. For the North American leg of her tour will be the musical guest as it stated on [http://www.myspace.com/avrillavigne her official MySpace site] . The setlist

*With her show in at Avril made over $400,000 according to Billboard Boxscore top grossing concerts.

*Avril filmed her DVD at Canada with a sold-out concert at the on April 7.

*Due to 'Acute Laryngitis' Avril cancels the last 8 North American Concerts. She also cancelled her concert in , the same day of the concert without explanation.

*In she only performed 11 songs. The first six and "Everything Back But You", "The Best Damn Thing", "I Don't Have to Try", "He Wasn't, "Sk8er Boi", because a delay due to rain meant she didn't go on stage until 9.30pm and there is a 10pm curfew at the arena; she performed until 10.15pm which landed her a fine.

*In , the first date following Avril's laryngitis, only 7 songs were sung - Girlfriend, Complicated, I'm With You, Don't Tell Me, Hot, He Wasn't and Sk8er Boi. This lead to record complaints as Avril performed for just 25mins, despite the tickets costing £35 ($67). She also left the stage after the first verse of Sk8er Boi and did not return. This left many Scottish fans disappointed as, support act, the Jonas Brothers performed for 45mins - almost twice as long as Avril.

*In Manchester, Helsinki, Amsterdam and Brussels she didn't perform "When You're Gone" and "Innocence" for unknown reasons.

*Her Show at sold out in less than 15 minutes.

*Avril Lavigne and husband Deryck Whibley played a song together during all the 2nd leg of TBDT in Canada including a show at the of Toronto.

*In Saint John, NB; Lavigne did not sing "Innocence", "Bad Reputation", or the "Girlfriend Remix". She did add "Keep Holding On" and had a guest appearance by her husband ; the two sung Sum 41's "In too deep" as a duet, at .

*Avril did a 10-tour date over the UK & Ireland and perform at the The O2 arena.

*The Tour stirred controversy when it confronted protests by conservatives in due to Lavigne being 'too sexy'. However, the government finally gave permission for her to perform on 29 August 2008.

*On September 16 Avril played for the very first time at the in Japan she sold over 40,000 tickets becoming this her biggest concert on 'The Best Damn Tour'.