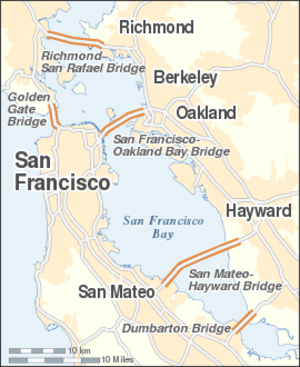 The Richmond-San Rafael Bridge (officially, the Memorial Bridge) is the northernmost of the east-west crossings of the in , USA, connecting Richmond on the east to San Rafael on the west end. It is commonly known as the Richmond Bridge, though in Richmond it is called the San Rafael Bridge. It opened in 1956.

The bridge measures 5.5 miles (29,040 feet / 8,851.39 m / 8.9 km) long. At the time it was built, it was one of the world's longest bridges. The bridge spans two principal ship channels and has two separate major spans, each of the cantilever type. In the interest of resistance to earthquakes, the portion connecting the major spans is lowered in elevation, giving the bridge a "" appearance and so also the popular name of its style; the "roller coaster span". This appearance has also been referred to as a "bent coat hanger". After it was completed, many were disappointed by the aesthetics of the low budget bridge, especially when compared to the engineering and historical marvels of the neighboring and the Bay Bridge.

According to [http://www.npr.org/templates/story/story.php?storyId=1147980] , conceived the idea for the song while driving across the Richmond-San Rafael Bridge.

Originally a part of State Route 17, the bridge is now part of Interstate 580. Upon its opening, the Richmond-San Rafael bridge was the last bridge across San Francisco Bay to replace a previous ferry service, leaving the Benicia-Martinez Ferry across Carquinez Strait as the only remaining auto ferry in the Bay Area (it would be replaced by a bridge in 1962). Each deck of the bridge has 2 lanes and a shoulder; westbound traffic rides on the upper deck, while eastbound traffic rides on the lower deck.

Construction was financed by the sale of $62 million in revenue bonds, along with a loan of $4.68 million from the State School Land Fund. The bridge was finished $4 million under budget.

The bridge recently under went an extensive program, similar to other bridges in the area. The fifty-year-old bridge was also showing its age and required age-related maintenance which was performed in conjunction with the seismic upgrade work. There were reports of cars being damaged while traveling on the lower deck by fist-sized concrete chunks falling from the joints of upper deck slabs.

To reduce impacts to the ongoing traffic the major activities of work were scheduled at night. Caltrans had to keep two lanes of traffic moving in each direction during daylight hours, but then they reduced that flow to a single lane in each direction at night. Thus, one trestle was completely closed for construction work, and two-way traffic was transferred to the other trestle.

The concrete segments of the trestle were precast in Petaluma and barged down to the bridge. At monthly intervals tugs position barges with one or two 100-foot (30 m) long, 500-ton pre-cast concrete roadway segments ready to be lifted into place by a 900-ton barge-mounted crane. Earlier, either two or four of the corroded, 50-ft (15 m) concrete segments of the old roadway were removed by crane. Then, a pile driver was moved into position for driving new piles. After the new concrete road segment was in place, steel plates were used to temporarily fill the gaps, and the roadway was ready for the morning rush-hour traffic. The construction resulted in a nightmare for commuters. At times, the Richmond-San Rafael Bridge construction ended up backing traffic all the way to Highway 101 into Central San Rafael though many of these users of the bridge are also grateful that the bridge now is more likely to withstand the risk of damage in a major earthquake.

However, the completion of this retrofit, on September 22, 2005 was celebrated as a success despite the many challenges, including the death of two workers. The $540 Million project, at the time the largest individual contract in Caltrans history, came in $136 million dollars under budget.

The retrofit is intended to allow the two-tier bridge to withstand a 7.4 magnitude earthquake on the Hayward Fault and an 8.3 magnitude quake on the San Andreas Fault.

Use of Third Lane

In both directions, the bridge is wide enough to accommodate three lanes of traffic. Currently the third lane is used as a right-hand shoulder or a "breakdown lane" and is marked along the bridge with the signs "Emergency Parking Only". However, in 1989, after the , the third lane was opened up as a normal lane to accommodate the increased amount of traffic after the Bay Bridge was shut down because of a failure of that span. Many commuters from San Francisco drove across the Golden Gate Bridge into Marin and then across the Richmond-San Rafael Bridge to go to Oakland (and vice versa). But then, once the Bay Bridge was reopened, that third lane went back to being an emergency lane.

In 1977, Marin County was suffering one of its worst water droughts in history. A temporary on-surface pipeline, six miles (10 km) long, was placed in the third lane. The pipe transferred eight million gallons of water a day from the East Bay Municipal Utility District's mains in Richmond to Marin's 170,000 residents. By 1978, the drought subsided and the pipeline was removed. The disused third lane was finally striped as a shoulder.

Since the construction of the bridge, there has been a longtime debate to make the third lane a bike lane. In 2001, a study confirmed that bicycle travel was legal and would be adequate in the 12' shoulder space provided by the bridge. However, to this day bicycle riders still are not able to cross the bridge, as the third lane still sits as an emergency lane.Fact|date=February 2007

For ten years, the Metropolitan Transportation Commition (MTC) and the Bay Area Toll authority tried to make the shoulder a regular lane of traffic and a bike lane. A movable barrier would be in place and the third lane would be a regular lane of traffic during rush hour and a bike lane when not needed. Caltrans rejected the idea because the emergency lane is needed for safety. The rejection has upset some people. The shoulder was needed on , (read section below). http://www.kron4.com/Global/story.asp?s=7870282

The bridge was closed on the morning of Friday, , as a southerly wind gusting to nearly convert|70|mi/h|km/h|abbr=on buffeted the span, knocking over four trucks on the lower deck and one truck on the upper deck. The bridge was closed for six hours. It was re-opened by late afternoon as the strong winds subsided.