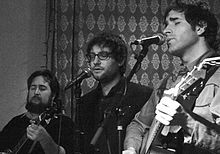 Founded in the early 1990s they debuted at the Nassau County Folk Festival and quickly started performing hundreds of gigs a year throughout the North East. Recording their first record as Common Rotation with the help of They Might Be Giants who subsequently backed them on the recording and allowed them to open on their first major tour across America.

Common Rotation have self-released five full length records and 'a song a day' for over ten years online at The Union Maid.

Peter Stass’s documentary film How to Lose chronicled the band's efforts to protest Clear Channel’s monopoly on the musical touring market by playing in fan’s homes from Alaska to Europe.

Amber Benson’s music video "Wasted Words" follows the band while performing for the Yu-pik Indians in the remote fishing villages of Kotlik and Russian Mission, Alaska.

Busch, who is known to most audiences for his work as an actor (Buffy the Vampire Slayer, The Professional, Grey’s Anatomy, House, American Dreamz)

Kufs, is a renowned singer-songwriter whose hard work has kept a song a day on The Union Maid for over ten years. He recently completed his first solo collection of songs, "A Dust Bowl Full O' Cherries.

Common Rotation’s recent tour with Dan Bern can be heard on his two releases, Live in Los Angeles and Live in New York.

Common Rotation provided the soundtrack to the Indie Comedy and Slamdance favorite "Drones" which is currently airing on Showtime Television.

"True Hollywood Romance" from The ClearChannel EP is featured as theme music in Kevin Pollak's comedy special, The Littlest Suspect.

In October Common Rotation will release their newest record God Keeps An Open Gallery. The album was recorded entirely in their current home in Angelino Heights, California with producers Brian Speiser and Julie Wolf. It includes 13 original compositions and a cover of MIA's Paper Planes with guest John Di Maggio. Other guests include They Might Be Giants' Marty Bellar and Daniel Weinkauf, Dan Bern, Mike Viola, Indigo Girls, Lyris Hung, The Dust Bowl Cavilers.

Common Rotation recorded” Salty South” with the Indigo Girls for their newest live record, Staring Down The Brilliant Dream.

Dan Bern and Common Rotation will be releasing a full length record of new songs produced by Adam Busch and Jon Griffin in 2012.

Common Rotation will also release an EP of songs produced by Mike Viola in early 2012.

Though other band members have come and gone, Adam and Eric have been with the band since its formation. Founded while the two attended high school in East Meadow, New York, the band was originally known as 28 Orange Street. As 28 Orange Street, the then-quartet released their first album, titled Common Rotation. Previous band members have included drummer "The Professor" Ken Beck and bassist Mike Uhler. Many of their recordings are from live events, but they also released an EP entitled Clear Channel as well as albums The Big Fear and Isalie.

Their song "Clear Channel" was featured in British Indie filmmmaker Evan Richards' 2006 film, "In a Day."

Common Rotation has recently made a name for themselves by going on the road with "living room" tours where, instead of playing at clubs, the band performs in the living rooms of volunteers for donations to cover their travel expenses.

In 2007, however, they performed a "proper" tour of the UK, albeit without Jordan Katz, alongside David Berkeley.

Common Rotation is out-spoken politically and socially. The Living Room tour was partially inspired by not wanting to play any venues owned by Clear Channel.

Common Rotation has opened for They Might Be Giants. Several members of The Band of Dans have been involved with CoRo albums. Much like TMBG's Dial-A-Song, CoRo's Union Maid offers a new song every day.