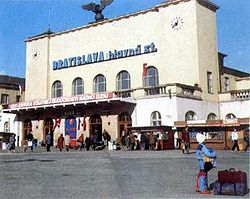 The station's main building before the addition of the foyer

Trains from this station depart to Germany, Austria, the Czech Republic, Hungary, Serbia, Croatia (in summer), Poland and the rest of Slovakia. 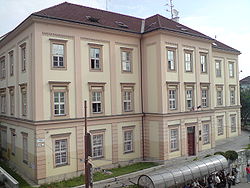 The original station building from 1848

The first station building, a two floors high building at Šancová 1, now serves as the headquarters of the railway police. It was built in 1848 as the terminus for the Vienna - Gänserndorf - Bratislava (Pressburg) and Břeclav - Bratislava (Pressburg) lines. The second building, which is used to this day, was built after the completion of the Budapest - Štúrovo - Bratislava line in 1905 based on the blueprints of Ferenc Pfaff, who was the Hungarian state railway's main architect at the time. Originally it was built in eclectic style, however in 1960 it underwent a major reconstruction, when the exterior was completely changed to be more "socialist" in nature. That's when the frescos were added to the interior as well. The foyer, colloquially called "Skleník" (meaning "Greenhouse"), has been added to the second building in 1987 as an expansion. The third building is slated to be demolished during the two year long reconstruction of Predstaničné námestie (literally "the square in front of the station"). This reconstruction has yet to begin; the most recent permitting process was scheduled to be completed by the end of 2008.[1]

In 1883, a connection was added to the Bratislava-Rača station, which was connected to the line to Žilina. The line to the Nové Mesto station is the most recently added line, and it was built in 1962

At first, the station also had freight loading and unloading facilities. One unique feature was the "vínovod" ("wine transport system"), which consisted of tubing from the station to the Paludaj family's wine cellars. Gravity flow drew wine from trains into barrels in the cellars.[2] The station also had a ropeway conveyor to the "Patrónka", which was a factory that produced ammunition cartridges, colloquially known as "patróny". As passenger traffic increased, freight operations were progressively relocated to other stations in the city.

The station's engine house by the stabling yard was built after the removal of the old stabling yard, which was formerly in the space occupied by platforms 3-5.

On January 1, 1919, as Czechoslovak troops were about to enter the city, negotiations between representatives of the Pressburg population, led by Paul Wittich, and Entente officers, led by the Italian Colonel Barreca, took place at the Pressburg railway station.[3]

Current rail traffic exceeds the station's track capacity, which occasionally becomes evident in a domino effect caused by delayed trains. One suggested solution is to transfer some of the trains to the Nové Mesto and Petržalka stations, which currently have unused track capacity.

Although improved when compared to the 1990s, safety situation remains a problem at Bratislava main station. It is still considered one of the least safe places in Bratislava, especially at night.[citation needed]

Bratislava hlavná stanica serves as the main hub for the local public transport service (MHD). It can thus be conveniently accessed from all parts of Bratislava. Many buses, trolleybuses and trams have their terminus here as well as almost all of the night buses operating in Bratislava.

Bratislava hlavná stanica features one of the city's major war shelters built during the communist era, to protect citizens from air raids or attacks with weapons of mass destruction. As with many other similar structures in Bratislava, it is inaccessible and not widely known to the public. Built in the 1950s, it is located underneath the Jaskovy rad Street and nearby houses and its designed capacity is 1 500 people. The main entrance can be found at the very end of the tunnel leading to platforms, after leaving the tunnel, the entrance is behind a small metal door built into the massive rock wall.
The shelter features several hallways, rooms, a command center, air filtering and power generating machinery and toilets. There are two emergency exits, one behind Hotel Spirit and the other behind the building known as U Matusa which in the past featured a pub with the same name, both on private property. The shelter belongs to Railways of Slovak Republic – ŽSR which plans to use it to protect its employees in case of future conflict.