Dagobert was the eldest son of Chlothar II and Haldetrude (575–604). Chlothar II had reigned alone over all the Franks since 613. In 623, Chlothar was forced to make Dagobert king of Austrasia by the nobility of that region, who wanted a king of their own.

When Chlothar II granted Austrasia to Dagobert, he initially excluded Alsace, the Vosges, and the Ardennes, but shortly thereafter the Austrasian nobility forced him to concede these regions to Dagobert. The rule of a Frank from the Austrasian heartland tied Alsace more closely to the Austrasian court. Dagobert created a new duchy (the later Duchy of Alsace) in southwest Austrasia to guard the region from Burgundian or Alemannic encroachments and ambitions. The duchy comprised the Vosges, the Burgundian Gate, and the Transjura. Dagobert made his courtier Gundoin the first duke of this new polity that was to last until the end of the Merovingian dynasty. 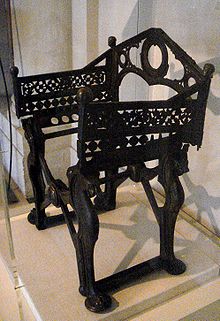 "Throne of Dagobert", bronze. The base, formed by a curule chair, is traditionally attributed to Dagobert, while the arms and the back of the chair were added under Charles the Bald. This throne was last used by Napoleon I in 1804 when he created the Legion d'Honneur. Cabinet des Medailles.

On the death of his father in 629, Dagobert inherited the Neustrian and Burgundian kingdoms. His half-brother Charibert, son of Sichilde, claimed Neustria but Dagobert opposed him. Brodulf, the brother of Sichilde, petitioned Dagobert on behalf of his young nephew, but Dagobert assassinated him and gave his younger sibling Aquitaine.

Charibert died in 632 and his son Chilperic was assassinated on Dagobert's orders. By 632, Dagobert had Burgundy and Aquitaine firmly under his rule, becoming the most powerful Merovingian king in many years and the most respected ruler in the West.

In 631, Dagobert led three armies against Samo, the rulers of the Slavs, but his Austrasian forces were defeated at Wogastisburg.

Rule in Neustria, from Paris

Also in 632, the nobles of Austrasia revolted under the mayor of the palace, Pepin of Landen. In 634, Dagobert appeased the rebellious nobles by putting his three-year-old son, Sigebert III, on the throne, thereby ceding royal power in the easternmost of his realms, just as his father had done for him eleven years earlier.

As king, Dagobert made Paris his capital. During his reign, he built the Altes Schloss in Meersburg (in modern Germany), which today is the oldest inhabited castle in that country. Devoutly religious, Dagobert was also responsible for the construction of the Saint Denis Basilica, at the site of a Benedictine monastery in Paris.

Dagobert died in the abbey of Saint-Denis and was the first Frankish king to be buried in the Saint Denis Basilica, Paris. 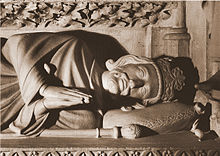 Dagobert's tomb at Saint-Denis, remade in the thirteenth century

The pattern of division and assassination which characterise even the strong king Dagobert's reign continued for the next century until Pepin the Short finally deposed the last Merovingian king in 751, establishing the Carolingian dynasty. The Merovingian boy-kings remained ineffective rulers who inherited the throne as young children and lived only long enough to produce a male heir or two, while real power lay in the hands of the noble families who exercised feudal control over most of the land.

Dagobert was immortalized in the song Le bon roi Dagobert (The Good King Dagobert), a nursery rhyme featuring exchanges between the king and his chief adviser, Saint Eligius (Eloi in French). The satirical rhymes place Dagobert in various ridiculous positions from which Eligius' good advice manages to extract him. The text, which probably originated in the 18th century, became extremely popular as an expression of the anti-monarchist sentiment of the French Revolution. Other than placing Dagobert and Eligius in their respective roles, it has no historical accuracy.

In 1984, a 112-minute long French-Italian comedy, Le bon roi Dagobert (Good King Dagobert) was made, based on Dagobert I. The movie is surprisingly realistic in showing the realities of early barbarian France. The soundtrack was composed by Guido & Maurizio De Angelis.

The author of the Chronicle of Fredegar criticises the king for his loose morals in having "three queens almost simultaneously, as well as several concubines".[3] The chronicle names the queens, Nanthild and the otherwise obscure Wulfegundis and Berchildis, but none of the concubines, stating that a full list of concubines would be too long.

In 625/6 Dagobert married Gormatrude, a sister of his father's wife Sichilde; but the marriage was childless. After divorcing Gormatrude in 629/30 he made Nanthild, a Saxon servant (puella) from his personal entourage, his new queen.[4] She gave birth to:

Shortly after his marriage to Nanthild, he took a girl called Ragnetrude to his bed, who gave birth to his oldest son:

It is possible that Regintrud, abbess of Nonnberg Abbey, was also a child of Dagobert. She married into the Bavarian Agilolfing family (either Theodo, Duke of Bavaria or his son Duke in Salzburg).