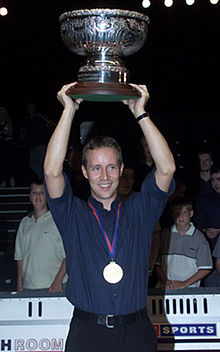 He has represented Team Europe on thirteen occasions in the Mosconi Cup, most recently in 2010. During the 2008 event Mika was crowned MVP, forever banishing bad memories of a costly miss in the final game of the 2006 event.

In early 2009, Mika was awarded the title of Player of the Year. Subsequently, he also claimed that title for season 2009 and was awarded early 2010.

Mika was born in London, England, and is also an extremely accomplished snooker player, having amassed more than 100 century breaks.[1]

Mika is the current (2009) two-time Men's Division title-holder of the US Open Nine-ball Championship, where the worlds top professional billiard players compete in Chesapeake, Virginia. This year Mika won 14 straight matches, finishing with a close 13-10 victory over Ralf Souquet in the finals. In last years event, Mika claimed the 13-7 victory and pocketed the first-place prize of US$40,000 on October 26, 2008 against runner-up Filipino Ronato Alcano, who settled for $20,000.[2][3][4]

Immonen nearly won his second world title at 2009 World Straight Pool Championship, but was defeated in the finals by Stephan Cohen of France.[5] Also in 2009, Immonen bested Darren Appleton to win the International Challenge of Champions, a tournament where he once reached the finals in 2002 but lost the sudden-death rack to Efren Reyes.

In Late November 2009 Mika finally won his second World Title in Manila at the WPA World Ten-ball Championships. He Dominated the Philippine hope Lee Van Corteza in the finals 11-6.

In late 2008 Mika teamed up with Intrinsic Media to produce MASTERING POOL,[6] a 3-part pocket billiard instructional series. The DVD series is packed with tips, techniques, systems, 3D animated diagrams, and expert commentary by Immonen himself.[7]