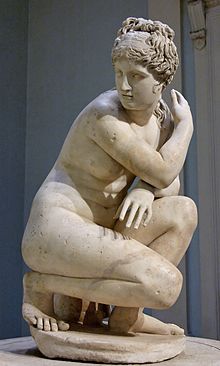 The Lely Venus once belonged to the painter Sir Peter Lely (Royal Collection, on loan to the British Museum

This article discusses the type itself: see links within it for specific instances of the type.

The Crouching Venus is a Hellenistic model of Venus surprised at her bath. Venus crouches with her right knee close to the ground, turns her head to the right and, in most versions, reaches her right arm over to her left shoulder to cover her breasts.[1] To judge by the number of copies that have been excavated on Roman sites in Italy and France, this variant on Venus seems to have been popular.

A number of examples of the Crouching Venus in prominent collections have influenced modern sculptors since Giambologna and have been drawn by artists since Martin Heemskerck, who made a drawing of the Farnese Crouching Venus that is now in Naples.

The model is often related to a corrupt passage in Pliny the Elder's Natural History (xxxvi.35), enumerating sculptures in the Temple of Jupiter Stator in the Portico of Octavia, near the Roman Forum; the text has been emended to a mention of Venerem lavantem sese Daedalsas, stantem Polycharmus ("Venus washing herself, of Daedalsas, [and another], standing, of Polycharmus"), recording a sculpture of a Venus who was not standing, by the otherwise unknown Doidalses or Daedalsas.[2]

Such terse archival references and so many existing ancient versions make archival identification of the Roman copies insecure, though some include a water jar and/or an additional figure of Eros which make identification easier (e.g. the Hermitage example, and here). The Crouching Venus was often paired with the other famous crouching sculpture of Antiquity, the Arrotino. 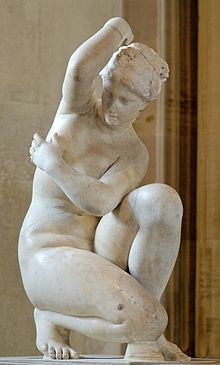 Small ancient bronzes of the Crouching Venus have survived. One, found in Syria, and formerly in the collection of Joseph Durighello, was sold by the Galerie Georges Petit, Paris.[12]

Appreciation in the Renaissance 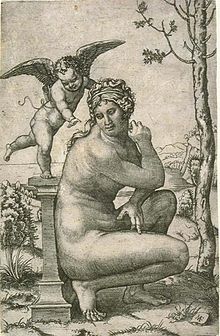 The early interpretation of the figure, as Venus at her birth, about to be carried ashore — a type of Venus Anadyomene — encouraged the restoration of a shell upon which she crouches, in which form the Medici sculpture was engraved by Paolo Alessandro Maffei, Raccolta di statue antiche e moderni..., 1704 (plate XXVIII)

Versions since the Renaissance

Several versions of the Crouching Venus issued from the atelier of Giambologna and his heir Antonio Susini; among examples of Susini's bronze reduction, one from the collection of Louis XIV is conserved in the Holburne Museum of Art, Bath,[13] while another, in the collection of Prince Carl Eusebius von Liechtenstein by 1658, remains in the Liechtenstein collection, Vienna.[14] 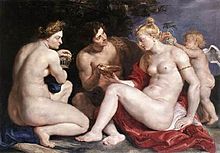 Allegory by Peter Paul Rubens, 1612-13, executed after his stay with the Gonzaga at Mantua, where he saw the Lely Crouching Venus, then in the Gonzaga collection