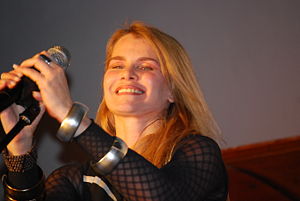 Born in Caracas, Venezuela of Spanish mother and Venezuelan father, Rivas gradually built her voice skills as a hobby, absorbing the influences ofIn 2005 Rivas returned to Aruba to be part of the show "Good Save The Queen", a tribute to the rock band Queen[2]. Since 2006 Rivas has spent 4 months each year in Tokyo, where she has found acclaim for her performances of Brazilian and Latin Jazz, sharing the summertime stage with the Indigo Trio, a local jazz ensemble in Roppongi, Japan. Rivas has recorded nine albums as a soloist, and also has performed live in Colombia, Brazil, Austria, Holland, Italy, Switzerland, France, Portugal, Panama, Puerto Rico, and the Dominican Republic.

In 2008 Rivas will be celebrating her 25th-year anniversary since starting her long career, with special homage concerts dedicated to the much-beloved Maestro Aldemaro Romero, who died in 2007 at 79 years of age, featuring Romero's music and arrangements, and scheduled for Venezuela and Colombia.