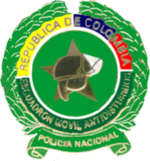 Mobile Anti-Disturbances Squadron or Escuadrón Móvil Antidisturbios (ESMAD) in Spanish is a Colombian National Police Riot control unit specialized on preventing and/or controlling public disturbances and riots, as well as controlling large masses of people. This unit is under the command of the Operative Directorate of the Colombian National Police.[1]

The Escuadrón Móvil Antidisturbios (ESMAD) was born as a decentralized unit from the Colombian National Police on February 24, 1999 by a transitional directorate, beginning with 9 officers, 8 non-commissioned officers and 200 patrollers mainly to support Colombian Departments and Metropolitan police forces to control and/or neutralize population disturbances or public events when their forces seem outnumbered or incapable to handle their action capacity. It was later legalized by resolution 01363 of April 14, 1999.[2] 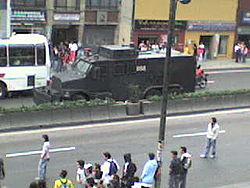 APC used by the ESMAD in a protest against George W. Bush visit to Bogotá.

The unit is also trained on human rights issues [3][dead link] however in 2006, it was largely criticized and questioned for some of their actions during the National University of Colombia riots. This riot police unit was also questioned by the Office of the United Nations High Commissioner for Human Rights after the death of six protesters.[4]

There are seven active mobile squadrons operating in Colombia: 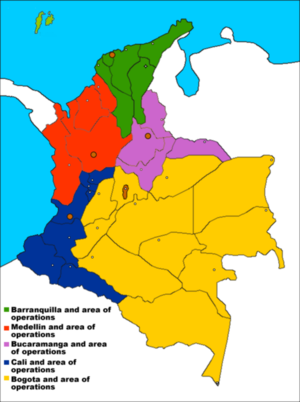