Agrimonia eupatoria is a species of agrimony that is often referred to as common agrimony, church steeples or sticklewort.

The whole plant is dark green with numerous soft hairs. The soft hairs aid in the plant's seed pods sticking to any animal or person coming in contact with the plant. The flower spikes have a spicy odor like apricots.

A. eupatoria is a foodplant for the caterpillars of the snout moth Endotricha flammealis. 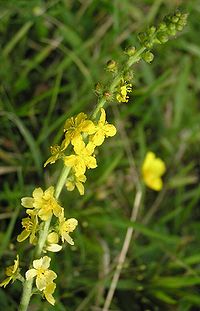 The common agrimony grows as a deciduous, perennial herbaceous plant and reached heights of up to 100 centimeters. Its roots are deep rhizomes , from which spring the stems. It is characterized by its typical serrated edged pinnate leaves. [1]

The short-stemmed flowers appear from June to September , in long, spike-like, racemose inflorescences. The single flower has an urn-shaped curved flower cup , the upper edge has several rows of soft, curved hook-shaped bristles, 1 to 4 millimeters long. The hermaphrodite flower has fivefold radial symmetry. There are five sepals present . There are five yellow, rounded petals.[1] The petals and the five to 20 stamens rise above the tip of the flower cup . The two medium-sized carpels in the flower cups are sunk into, but not fused with it . The flowers with their abundant pollen supply attract hoverflies , flies and honey bees. The pollinated flowers develop fruits with burs . These attach to passing grazing animals such as cattle , sheep and deer and are spread over a large area.[1]

Agrimony has been stated to have medical and magical properties since the time of Pliny the elder. It is ruled astrologically by Cancer, according to Nicholas Culpeper. Common folklore held that it could cure musket wounds, and ward off witchcraft. 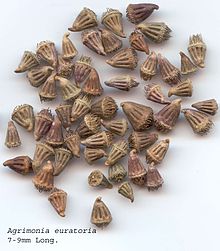 The 9th-century text Bald's Leechbook advised the use of Agrimony as a cure for male impotence - saying it should be boiled in milk, and that it could excite a man who was "insufficiently virile;" it also states that when boiled in Welsh beer it would have the opposite effect.[2]