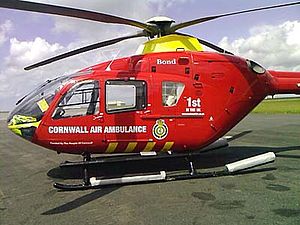 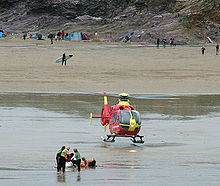 The helicopter is based at a hangar at Newquay Cornwall Airport (EGHQ),[4] near Newquay, which enables servicing and maintenance to be carried out overnight, a task which proved impossible at the original open-air base at Treliske Hospital. The move to the new base has also given the Air Ambulance a more centrally located base, leading to even quicker response times in many parts of the county. It can be airborne in two minutes of a 999 call and flies at 140 mph (230 km/h) enabling fast paramedic support to the patient. It can cover the entire county in less than 20 minutes and reach the Isles of Scilly in 28 minutes. On average it takes 12 minutes from the time of the call to the scene of the incident.[5]

Patients are taken to either Derriford Hospital or the Royal Cornwall Hospital (Treliske).

Take-off from a putting green

The Cornwall Air Ambulance carries a crew of three, the pilot and two paramedics. To enable seven-day flying, the service presently uses three pilots who are shared with Bond Air Services' Trinity House operation which, like the Air Ambulance, is based at RAF St. Mawgan. The aircrew are selected from existing ambulance service personnel and specially trained for their work on the helicopter.There was originally a pool of twenty aircrew who worked on the Air Ambulance on a rotation basis. In the intervening periods between being on the helicopter the crew would revert to their normal jobs on the road ambulances in the County. In 2006 the system was changed, now there are just 6 full time Aircrew to improve continuity. 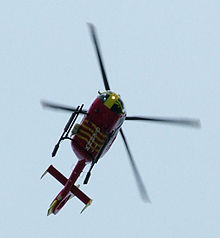 The first helicopter was a Eurocopter BO 105D which was later replaced with the more advanced Eurocopter EC 135T. The EC 135 is used extensively in an air ambulance capacity throughout the world. It has four rotor blades to ensure a smooth flight which can prove particularly beneficial for patients suffering head or spinal injuries. Twin turbine engines give it a cruising speed of 160 mph (260 km/h), and skid landing gear allows it to cope with all types of terrain. Its compact dimensions allow it to land in confined spaces, yet it has room to carry two stretcher patients. It contains all equipment found on any front-line ambulance plus other special items.

The control centre for the South Western Ambulance Service is located at Exeter and is manned twenty four hours a day, everyday, throughout the year. It is here that the decisions are made regarding ambulance mobilisation for the four counties of Cornwall, Devon, Somerset and Dorset, in response to 999 calls. The decision is made by the Cornwall Controller as to whether the patient should go by land ambulance, or be flown to hospital on the Air Ambulance.

It was assessed[clarification needed] that the cost of the Air Ambulance was seven times more than a land ambulance, but it could cover the same area as seventeen land vehicles. Operational costs for the Cornwall Air Ambulance are £80,000 a month as of 2007[update]. This includes the lease of the aircraft, pilots, service engineers, spares, servicing and insurances, as well as a charge of some £350 per flying hour to cover fuel and other combustibles. The cost of the two paramedics is borne by the Strategic Health Authority, by whom they are employed.

The Cornwall Air Ambulance is a charitable organization solely maintained by donations as it receives no form of official funding. The resident population and visitors to Cornwall finance the Air Ambulance by donations, various fund-raising events, purchase of weekly Air Ambulance lottery tickets and legacies.

All donations received are administered by the First Air Ambulance Service Trust (FAAST), a registered charity established in November 1987 for this purpose.

How it was started 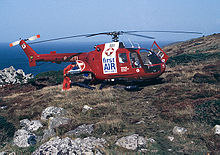 The concept of an Air Ambulance in the UK began in the summer of 1986 and was developed from an idea by ex-naval helicopter pilot, Geoff Newman, [6] who was living in Cornwall at that time. He researched ways in which public helicopter services could work as an Air Ambulance based on the successful German model, established in 1973 which by 1986, had around 20 helicopters serving the German public. He envisaged that the UK, as an advanced and aviation oriented country with Navy and RAF Search and Rescue helicopter services, could do the same.

Newman's initial thought was for an Air Ambulance to be funded by the NHS, [7] but this wasn't realistic due to the unpredictable and enormous costs of the venture eroding allocated budgets. There were complex issues of funding and command and control. For funding, Newman looked at the way charities are supported entirely by public donation, also the route of pursuing commercial sponsorship. Command and control would be entirely with the ambulance service, and the helicopter, a MBB105, was supplied by Bond Helicopters free of charge for the first three months and fuel was provided by Air BP.

The First Air Ambulance added a new dimension to Cornwall's health care service. Newman was the only pilot for the early months of the service and completed the first 400 missions, flying a five day week. The first patient air-lifted was a student with a severe spinal injury from the beach at Porthcurno.