Born to Be Wild

Born to Be Wild 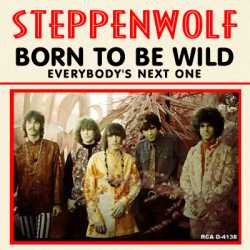 "Born to Be Wild" is a rock song written by and made famous by the American rock band, Steppenwolf. It is often used in to denote a biker appearance or attitude. The song is sometimes described as the first heavy metal song ever written and is also said to have inspired the name of the emerging heavy metal genre; although these claims are disputed, the song's second verse (which refers to "heavy metal thunder," though it is a reference to the weight of the motorcycle) contains the first recorded reference to "heavy metal" in the context of rock music. [Robert Walser, Running with the Devil: Power, Gender, and Madness in Heavy Metal Music (1993)]

Although initially offered to other bands – , for one [Liner notes, The Human Expression: Love at Psychedelic Velocity, Collectables Records (1994).] – "Born to Be Wild" was first recorded in 1968 by Steppenwolf. (Under an earlier stage name, "Dennis Edmonton", was previously a member of , the predecessor band to Steppenwolf). "Born to be Wild" was the band's second and most successful single, reaching #2 on the singles charts.In 2004, "" magazine placed "Born to be Wild" at #129 on the 500 Greatest Songs of All Time list.

The song was initially released in 1968, but it was subsequently included in many s and soundtracks. The first of these was the soundtrack for the movie "Easy Rider" (1969). Unlike the album or single version, the song on this soundtrack is accompanied by the sounds of s as an introduction. (Another Steppenwolf song from their first album, "" was also used in the film.) When the movie was in production, "Born to Be Wild" was used simply as a placeholder, since had wanted to do the movie's soundtrack. Eventually, it became clear that the song was well suited for the movie. [cite web
url=http://www.songfacts.com/detail.php?id=1142
title=Born To Be Wild Songfacts
publisher= ] At least in part because of its prominence in this movie, "Born to Be Wild" is probably the song that is most closely associated with s.

The also used the song but without the lyrics as an in-game tune that played during a race. 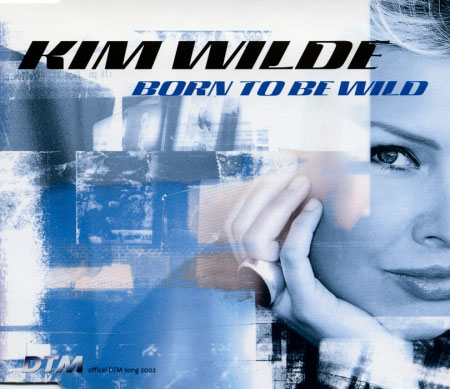 released his version of "Born To Be Wild" in 1969. It was a moderate hit, climbing to the middle of both the US Pop and R&B charts.

In 1983, Raven covered the song together with on their album "All for One".

In it was covered by to launch in the UK/

In 2002 a release by British pop singer was recorded as the theme song for broadcasts of the DTM.

In 2007 a cover by rock band was recorded for use by TNT for their NASCAR on TNT Summer Series broadcasts of the . The song also appears on a 2007 re-release of their CD along with a non NSCS version of the music video.

It was also parodied by under the title "Born-Again Child".

The song's main is played once midway through Blue Öyster Cult's The Marshall Plan.

Hinder the American rock group have also covered 'Born to be wild'.

Another version of the song appears on the game .

Heavy Metal singer covered this song, featuring the voice talents of , on the CD, "", and later re-released on the box set Prince of Darkness.

Ozzy turns this song into a comedy, starting with Miss Piggy looking for , but then stumbles into the wrong room where she screams for Kermit. Ozzy's voice then answers her, and Miss Piggy apologizes to Ozzy, but he insists she stay. The music then begins, Miss Piggy stating that "the frog can wait". As the song is played through, Miss Piggy frequently screams words, such as "Yes!" and "Yeah!" and sings the famous chorus line "Born To Be Wild!." Things start to get out of hand when Ozzy begins to go crazy, screaming the he "Loves Miss Piggy" and then falling unconscious. He awakes a few seconds later, after the music has stopped, and asks Miss Piggy to give him a kiss. She storms out the room, angry with Ozzy.

"Born to Be Mild"

An obvious play on the name of this song is created by replacing "wild" with "mild", and that phrase has entered popular culture in many areas. The most prominent use of this phrase is probably a live comic performance by comedian in that was released on the videocassette format in 1990 with the title "". Also, has an unreleased song that is a of "Born to Be Wild" called "Born to Be Mild"; the singer is in the guise of a computer .Fact|date=January 2008 An episode of has a motorcycle gang thought to be called The Wild Ones when they are actually a bunch of old people (The Mild Ones).