Medina-Sidonia is a city and municipality in the province of Cádiz in the autonomous community of Andalusia, southern Spain. It is considered by some to be the oldest city in Europe, used as a military defense location due to its elevated location. Locals are known as Asidonenses. The city's name comes from Medina (Arabic for city) and Sidonia (of Sidon), meaning "City of Sidon".

Medina-Sidonia was one of Spain's most important ducal seats in the 15th century; producing an admiral, Alonso Pérez de Guzmán, 7th Duke of Medina Sidonia, who led the Spanish Armada against England in 1588. The title of Duque de Medina Sidonia was bestowed upon the family of Guzmán El Bueno for his valiant role in taking the town. The line continues and was led until March 2008 by the controversial socialist, Luisa Isabel Álvarez de Toledo, 20th Duchess of Medina Sidonia (born 1936).

This city was most likely ancient Asido, an Iberian settlement which may have been founded by the Phoenicians, hence the later name Sidonia reflecting its foundation by Sidon. Its earliest phase is known through its coinage and its 2nd and 1st centuries BC issues bear the Latin inscription Asido but also Punic inscriptions such as 'sdn or b'b'l, with Herakles and Dolphins being notable obverse and reverse designs. The Barrington Atlas of the ancient world equates this site with modern Medina Sidonia-lying within the ancient Roman province of Turdetania some 30 km (19 mi) inland from the Southern Spanish coast, this site lay upon a hill c 35 km (22 mi) to the east of Gades (modern Cadiz), and 15 km (9 mi) to the west of the Besilus river.[1] 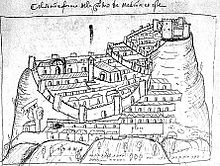 By the 3rd century BC the Romans had gained control over much of southern Spain and once coming under Roman hegemony this site was later referred to as Asido Caesarina.[2] 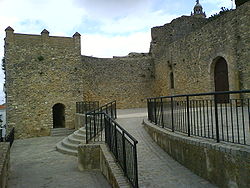 In 712 the town was conquered by the Muslim commander Musa ibn Nusair, and became the capital of the cora (province) of Sidonia in the emirate of Spain. It returned in Christian hands with Alfonso X of Castile, in 1264, becoming a stronghold along the frontier with the last Muslim country in the Iberian peninsula, the Kingdom of Granada. It was also the seat of several military orders.

In 1440 it became part of the lordship of the Dukes of Medina-Sidonia.

The town has ais characterized by medieval walls and tidy narrow cobbled streets flanked by rows of reja-fronted houses. Sights include: