"Old 100th" or "Old Hundredth" is a hymn tune from Pseaumes Octante Trois de David (1551) (the second edition of the Genevan Psalter), and is one of the best known melodies in all Christian musical traditions. The tune is usually attributed to the French composer Loys Bourgeois (c.1510 – c.1560).

Although the tune was first associated with Psalm 134 in the Genevan Psalter, the melody receives its current name from an association with the 100th Psalm, in a paraphrase by William Kethe entitled All People that on Earth do Dwell. The melody is commonly sung with diverse other lyrics as well.

The Genevan Psalter was compiled over a number of years in the Swiss city of Geneva, a center of Protestant activity during the Reformation, in response to the teaching of John Calvin that communal singing of psalms in the vernacular language (French, in this case) is a foundational aspect of church life.[1] This was in contrast to the prevailing Catholic practice at the time of sacred texts being chanted in Latin by the clergy only.[2] Calvinist musicians including Loys Bourgeois supplied many new melodies, and adapted others from sources both sacred and secular. The final version of the psalter was completed in 1562.[3] Calvin intended the melodies to be sung in plainsong during church services, but harmonizations were provided for singing at home.

The original lyrics set to this tune, from the Genevan Psalter, are taken from Psalm 134. They have been translated thus:[4]

You faithful servants of the Lord,
sing out his praise with one accord,
while serving him with all your might
and keeping vigil through the night.

Unto his house lift up your hand
and to the Lord your praises send.
May God who made the earth and sky
bestow his blessings from on high.

Old 100th is commonly used to sing (and is named for) the version "All People That on Earth Do Dwell," made from Psalm 100, which originated in the Anglo-Genevan Psalter (1561) and is attributed to the Scottish clergyman William Kethe.[4] Kethe was in exile at Geneva at this time, as the Scottish Reformation was only just beginning. This version was sung at the coronation of Queen Elizabeth II in 1953, with harmonization and arrangement by the composer Ralph Vaughan Williams. The first verse is as follows:[5]

All people that on earth do dwell,
Sing to the Lord with cheerful voice.
Him serve with fear, His praise forth tell;
Come ye before Him and rejoice.

A hymn commonly sung to Old 100th is "Praise God, from Whom All Blessings Flow," often known simply as The Doxology, written in 1674 by Thomas Ken, a clergyman in the Church of England.[6] This hymn was originally the final verse of a longer hymn entitled "Awake, My Soul, and With the Sun,"[7] though it is most commonly sung by itself as a doxology. The traditional text is thus, although a modernized version is also widely used:

Praise God, from Whom all blessings flow;
Praise Him, all creatures here below;
Praise Him above, ye heavenly host;
Praise Father, Son, and Holy Ghost.

The melody can be (and often is) used for any hymn text in long meter (four lines of eight syllables each). The hymn All People Than On Earth Do Dwell, a paraphrasing of Psalm 117 by Isaac Watts with the above Doxology as the final verse, is commonly sung to the tune.[8] In the Sacred Harp and other shape note singing traditions, the tune is sung with the text "O Come, Loud Anthems Let Us Sing," a metrical paraphrase of Psalm 95 from Tate and Brady's A New Version of the Psalms of David. 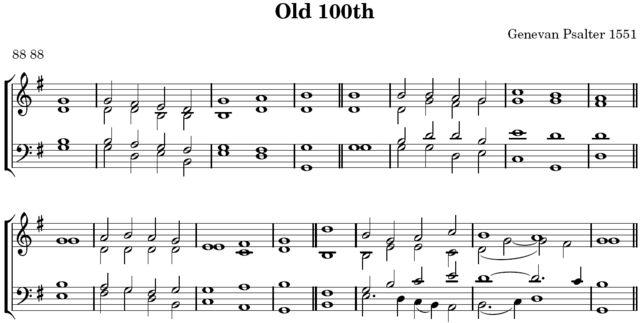 Uses in other works