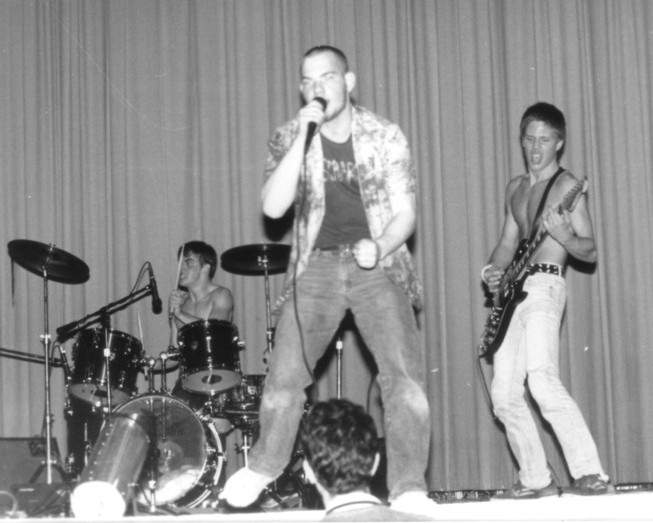 Siege was an influential American group from . They were active in the 1980s hardcore punk scene from 1983 to 1985, and reunited briefly in the early 1990s.

Siege's unprecedented level of extreme hardcore punk was some of the fastest and heaviest of its time, [ [http://homepages.nyu.edu/~cch223/usa/albums/siege_dropdead.html KFTH - Siege: Drop Dead CD ] ] incorporating lightning fast tempos, chord changes, vocal delivery, and , thus setting the stage for the emerging scene. And though rather short-lived and little-known during their existence, subsequent musicians have cited the group as a profound influence, including the famous British grindcore band and the American band , whose namesake was derived from the title of Siege's demo of the same name.

Siege formed in 1983 in Weymouth, . The band's original lineup consisted of vocalist and saxophonist , guitarist , bassist , and drummer Rob Williams. Mahoney was from Braintree, while the rest of the band was from Weymouth.

Siege's first official show was at a "" in the spring of 1984 at their Weymouth high school. They were disqualified when McNamee smashed his instrument onstage.

Despite their proximity to Boston, Siege did not fit into the Boston Crew-dominated hardcore scene as they performed most of their gigs further away in , , and . The band played gigs in Greenfield with local hardcore bands DYS, , , , and , out-of-state at the Living Room in Providence, and at Anthrax in Stamford.

In 1985, Siege was scheduled to play their first show in at with The Necros. Mahoney did not show up for the gig, and Siege disbanded shortly after. Williams later formed the band Nightstick.

In 1991, Siege reformed with frontman on vocals. They recorded a demo tape from which only 1 track has so far been released, appearing on the "" Compilation LP. Ironically, their track "Life of Hate" denounces homophobia. Siege disbanded again the following year.

Siege recorded a six-song demo tape at Radiobeat Records in on , . The demo was produced by (who is also the producer of , , S.S.Decontrol, , and many others), and has been extensively bootlegged. In October 1984 the band recorded three more songs at Radiobeat with Giordano for 's classic 1985 hardcore compilation called "". Those 3 songs were Siege's only official original release.

:"The way our studio operated was that anything that comes in –there’s no value judgements made about the music. We just record it. Still, one of the things that I guess was cool about being a staff engineer is that I wouldn’t have sought out a band like that. I wasn’t philosophically into anything that they were doing, but they were all good musicians –you would have to be to stay together at the speeds they were playing at. So there was that aspect of it, and just the whole pushing the envelope thing. It sounds like it’s just gonna completely break apart going 700 miles through the sky and then all of a sudden everything just comes right together again."

:"And they were some of the most unassuming, laid-back people to ever work with. I mean, they had no attitude at all. They just came in and they were just really polite and very thankful, and then when they turned on the amps and made that noise, it was just unbelievable that it was coming from them."' [Mudrian, Albert, "Choosing Death", Feral House, 2005. ISBN 1-932595-04-X]

Siege's 3 songs from the "Cleanse the Bacteria" compilation and 6-song demo were released by in 1994 as the "Drop Dead" CD. The same material was released on 12" vinyl in 2004 by .