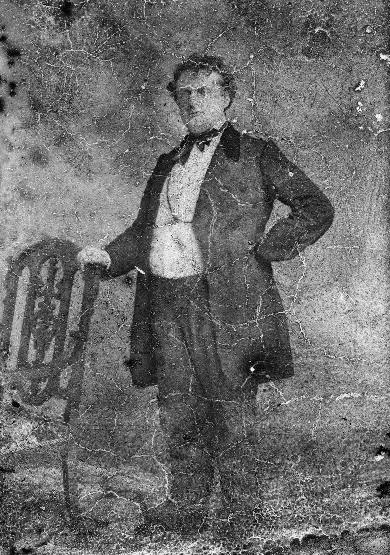 John Albion Andrew (, ndash , ) was a U.S. . He served as the between 1861 and 1866 during the tumultuous . He was a guiding force behind the creation of some of the first units of black men&mdash;including the famed .

John A. Andrew was born in . His father, Jonathan Andrew was a descendent from an early settler of Boxford, Massachusetts and a small but prosperous trader in Windham. His mother, Nancy Green Pierce, was a teacher at Fryeburg Academy. John Albion was the eldest son. His mother died in 1832.

Andrew entered in 1833. Although he was studious and popular with other students, he did not shine academically and was ranked near the lowest in his class. After his graduation in 1837, he moved to Boston to study law under Henry H. Fuller, with whom he became close friends.

After his admission to the bar, Andrew joined the Whig party and began to support the anti-slavery movement. In 1848, he helped organize the , which opposed the expansion of slavery. Following the failure of the Free Soil Party, Andrew joined the Republican party in the mid-1850's.

He was elected to as a Representative in the General Court in 1857. Following John Brown's 1859 raid on Harper's Ferry, Virginia, Andrew participated in organizing legal aid for Brown, generating favorable responses amongst the people of Massachusetts. In 1860, he was elected governor of Massachusetts by a huge margin.

Andrew's strong feelings about emancipation are clearly expressed in the following quote from an 1862 speech:

Andrew was receptive to the concept of using black men as uniformed soldiers in the . Working closely with the Federal government and with , he authorized the formation of two regiments of black infantry, the 54th and 55th Massachusetts, composed of blacks from the state, as well as , , , and other states. Shortly after the , Andrew became one of the leading state executives at the Loyal in , which ultimately backed Lincoln's and the war effort.

In 1864, Andrew wrote a letter to describing a woman named Lydia Bixby who lost five sons in battle and asking Lincoln to express his condolences. Lincoln then sent the famous to Bixby, who turned out to not only dislike Lincoln, but was also a Confederate sympathizer.

He left the office of governor in 1866 and again took up the practice of law, although he intended to remain active in politics. Having associated with the Radical Republicans during the war, Andrew took a more conciliatory tone towards Reconstruction, and did not favor some of the Radical Republicans' more extreme measures.

He died in 1867 of after having at his home in Boston. He is buried in the Hingham (Old Ship) Cemetery in Hingham, Massachusetts.

In 2007, governor hung Andrew's portrait over the fireplace in his office, calling him an inspiration.

John A. Andrew St., in the Jamaica Plain section of Boston, is named in his honor, and his name is one of four on the Soldier's Memorial in the same community.