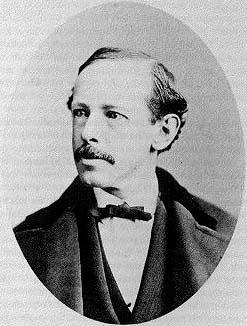 Horatio Alger, Jr. (, &ndash; , ) was a 19th-century American who wrote approximately 135 s. Many of his works have been described as stories, illustrating how down-and-out boys might be able to achieve the of wealth and success through hard work, courage, determination, and concern for others. This widely held view involves a significant simplification, as Alger's characters do not typically achieve extreme wealth; rather they attain middle-class security, stability, and a solid reputation &mdash; that is, their efforts are rewarded with a place in society, not domination of it. He is noted as a significant figure in the history of American cultural and social ideals, even though his novels are rarely read these days. As bestsellers in their own time, Alger's books rivaled those of in popularity.

Alger was born in , on , , to a minister who wanted his son to follow him into the religious world. He was tutored at home by his father until the age of ten, when he was admitted to the Gates Academy in . A year after graduating from Gates, he was admitted to at age 16. For the next four years, he studied under with the intention of one day becoming a poet.Fact|date=July 2008 After graduating, he devoted himself to teaching and writing, with uneven success. He then became the 32nd principal of for a short tenure. Coming to the conclusion that he did not like teaching, he returned to Harvard in 1857 to pursue the ministry.

in the parish. These were investigated and proved to be true.

In letters now housed at the Harvard Divinity School, Brewster church officials wrote to the hierarchy in Boston, complaining "that Horatio Alger, Jr. has been practicing on [the boys of the church] at different times deeds that are too revolting to relate." Later they are related: "gross immorality, and a most heinous crime, a crime of no less magnitude than the abominable and revolting crime of unnatural familiarity with boys. . . . which he neither denied or attempted to extenuate but received it with apparent calmness of an old offender—and hastily left town on the very next train for parts unknown."

In response to complaints by the church, Alger Sr. wrote Charles Lowe, the American Unitarian Association (AUA) general secretary, stating that his son would resign from the ministry and not seek another church. All parties involved agreed to keep matters quiet – the parents of the boys reluctantly. So far as is known, Alger discussed this incident only once, in 1870, with psychologist .

:Friar Anselmo (God's grace may he win!):Committed one sad day a deadly sin;:...

The poem goes on to recount the friar's rendering of aid to a wounded traveler and ends with Anselmo's redemption upon the appearance of an who exhorts Anselmo to dedicate himself to service:

:Thy guilty stains shall be washed white again,:By noble service done thy fellow-men.

In 1866, after the Brewster incident, Alger moved to New York City, which proved to be a turning point in his career. He was immediately drawn into the world of impoverished young bootblacks, newspaper boys, and peddlers. He spent much time with young men and often ate his meals and slept at the Newsboys' Lodging House.Fact|date=July 2008 He also invited boys to his small apartment in a boarding house.

Alger's empathy with the young working men, coupled with the moral values he learned at home, formed the basis of the first novel in his "Ragged Dick" series (1867). The book was an immediate success, spurring a vast collection of sequels and similar novels, including "Luck and Pluck" (1869) and "Tattered Tom" (1871), all with the same theme: the rise from rags to riches. In fact, the theme became synonymous with Alger, whose formula for success was based on luck, pluck, and virtue.

Essentially, all of Alger's early novels are the same: a young boy struggles through hard work to escape poverty. However, it is not the hard work itself that rescues the boy from his fate, but rather a wealthy older gentleman, who admires the boy as a result of some extraordinary act of bravery or honesty that the boy has performed. For example, the boy might rescue a child from an overturned carriage or find and return the man's stolen watch. Often the older man takes the boy into his home as a ward or companion.

Although a "Horatio Alger story" has come to signify someone who begins with few resources and ends with vast riches, Alger's characters do not usually become wealthy. His protagonists typically achieve comparatively low-level jobs in companies, often attaining personal stability but not wealth or prominent position. Veteran launched a new in 1964, "The Tycoon", and entitled the first episode "Horatio Alger Again". In Brennan's ABC series, the character Walter Andrews is an Horatio Alger-style person who did become very wealthy and then used his resources to help others.

Despite his remarkable literary output, Alger never became rich from his writing. According to legend, he gave most of his money to homeless boys and in some instances was actually conned out of his earnings by boys he tried to help. His books are no longer as popular as they once were, but the moral messages they relayed were an important factor in popularizing the American dream. At the time of his death, Alger was living with his sister Augusta in . She destroyed all his personal papers. He is buried in the family plot in Glenwood Cemetery, South Natick.

Since 1947, the Horatio Alger Association has bestowed an annual award on "outstanding individuals in our society who have succeeded in the face of adversity" and "to encourage young people to pursue their dreams with determination and perseverance".

In 2006 the accusations of resurfaced at an annual fair held in Marlborough in honor of the writer. These led the mayor and other town leaders to announce intentions of changing the name of the fair so as to avoid seeming to celebrate the memory of a child abuser.

Perhaps to capture some of Alger's popularity, also wrote some of his novels using Alger's name as a pseudonym.

In 1928, Herbert R. Mayes published the spurious biography "Alger: A Biography without a Hero". This pseudo-biographical presented itself as a biography of the well-known author, allegedly based on Alger's diaries and secondary sources consulted by the author. However, in reality those diaries and secondary sources did not exist; Mayes simply made up anecdotes to fill in the gaps in his knowledge of Alger's life. Those stories ranged from the merely speculative &mdash; for example, Mayes made Alger's father into a stern, repressive personality who contributed to Alger's semi-repressed homosexuality later in life &mdash; to the bizarre. In the latter category, Mayes had his 26-year-old Alger run off to Paris rather than gratify his father with a job in the clergy. Later, in New York, the fictional Alger adopts a young Chinese boy named Wing and cares for him until Wing is conveniently killed by a runaway horse. Mayes said in 1972:

:"If Alger ever kept a diary, I knew nothing about it. In any case, it was more fun to invent one. I had no letters ever written by Alger, which was fortunate. Again, it was more fun to make them up, as it was with letters presumably sent to Alger, none of which I had ever seen."

Mayes' fictional biography went virtually unquestioned until the 1960s. In 1961, amateur Alger enthusiast Frank Gruber published "Horatio Alger, Jr.: A Biography and Bibliography", challenging Mayes' account, and this challenge was followed by Ralph D. Gardner's similarly fact-based 1964 "Horatio Alger, or the American Hero Era". (Ironically, these biographies were ill-received by many critics, who preferred Mayes-based works such as John Tebbel's 1963 "From Rags to Riches: Horatio Alger and the American Dream".) In the 1970s, Mayes finally admitted the , but statements and anecdotes from "A Biography without a Hero" continue to turn up in poorly-researched biographies even today. Reliable alternatives include Gary Scharnhorst's "Horatio Alger, Jr." (1980) and Carol Nackenoff's "The Fictional Republic: Horatio Alger and American Political Discourse" (1994).