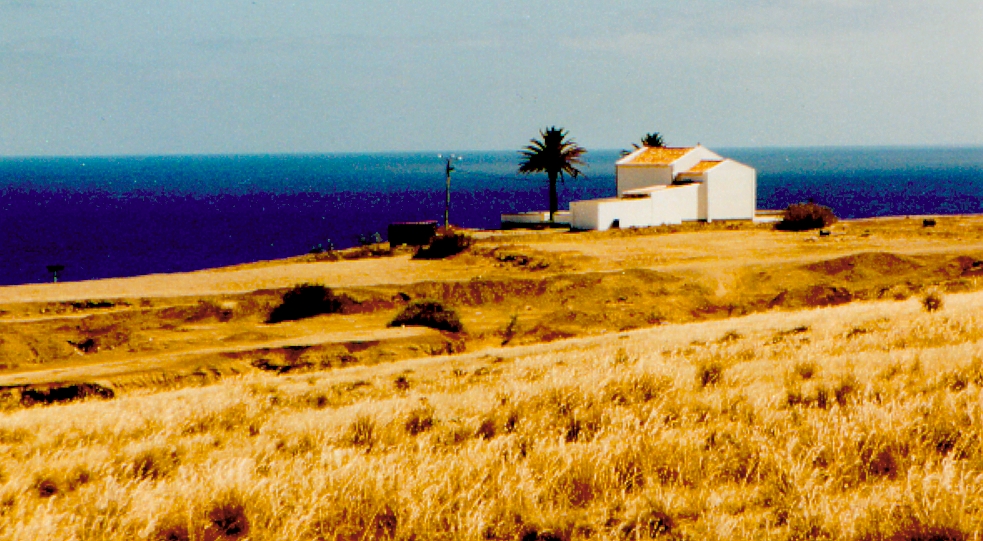 Porto Santo Island (pron. IPA2|'poɾtu 'sɐ̃tu) is a Portuguese island 50 km northeast of in the . Administratively, it is part of the Autonomous Region of Madeira. The main urban area in which is one of the five Portuguese municipalities that have only one parish is the city of Porto Santo, also known as (pron. IPA2|'vilɐ bɐ'lɐiɾɐ). The population in was 4,474. The density was 106.1/km². The island also has an airport which serves flights to , which is only a 15-minute flight away. It is the northernmost and the easternmost island of the Madeira Archipelago. The municipality has no land boundaries and is encircled by the . The nearest place is in the island of to the southwest which serves as its port to Funchal. The length of the island is about 9 km. The main industry is tourism.

The island's geography includes farmlands in the southern and central parts and further to the south a long shoreline with a few beaches, forests and grasslands to the west, rocky ledges and cliffs with a longer coastline to its north, forests to the northeast, drylands with grasses to the northern part and mountains along the northeastern part with about five to six main mountaintops with a few grasslands. Much of the coastline is to the west, the north and the east. There are islets to the north east and a small peninsula with a mountaintop in the eastern end of the main island. Porto Santo has about 9 km of sandy beaches while Madeira island has virtually none, with tiny exceptions such as Calheta.

The official discovery of Porto Santo occurred in , with the trip of the knights of Infant Henry, and , in accordance with the orders of king D. John I.

Its captain-donee was , that received letter of donation in November of . The name of Porto Santo (Holy Port) was given, originally to the bay that, in the south coast, served of shelter when the navigators had been gathered by a storm.

In the first centuries of settling, the development of this place knew some difficulties due to scarcity of water and to the assaults of Algerian and French pirates.

* The discoveries of Porto Santo and Madeira were first described by Gomes Eannes de in "Chronica da Descoberta e Conquista da Guiné". (Eng. version by Edgar Prestage in 2 vols. issued by the Hakluyt Society, London, 1896-1899: "The Chronicle of Discovery and Conquest of Guinea".)

* relates in French these discoveries in his novel: "L’Écuyer d’Henri le Navigateur", published by Éditions l’Harmattan.

The 9km long sandy beach is the main attraction for tourists.

married and lived there for some time. Columbus' house is now a museum that presents a permanent exhibition about his life and family ties with Porto Santo, as well as temporary art exhibitions.

The island has a that is promoted by Spanish golfing champion . Porto Santo Golf Course will be the largest course in the whole of the Madeira Archipelago once the planned second course is completed and will be able to accommodate 500 players at once. At the moment (2008) there is one 18-hole golf course and one nine-hole course. Porto Santo golf complex, includes eight tennis courts and an equestrian center, circles Pico Ana Ferreira.

Porto Santo has several schools, a , a gymnasium, several churches, a square (""), a Congress Centre, a museum, shopping centres, bars, and restaurants.